You can add the World Boxing Organization (WBO) to the list of sanctioning bodies not expected to grant Dillian Whyte a title shot anytime soon.

An appeal filed by highly-ranked heavyweight contender from England to protest the sanctioning body’s appointment of Oleksandr Usyk as its heavyweight mandatory contender was denied on Aug. 15, following a month-long process to review the matter. The upheld ruling will allow Usyk to next challenge the winner of the unified title fight rematch between Andy Ruiz and Anthony Joshua, which is due to take place later this year.

The ruling—a copy of which was sent to Whyte, Usyk and their respective promoters and legal teams—is just the latest piece of bad news to come this summer for Whyte, who remains provisionally suspended by the World Boxing Council (WBC) after having tested positive for a banned substance prior to his July 20 interim heavyweight title win over Oscar Rivas. The substance was discovered during random drug testing as conducted by United Kingdom Anti-Doping (UKAD) agency. 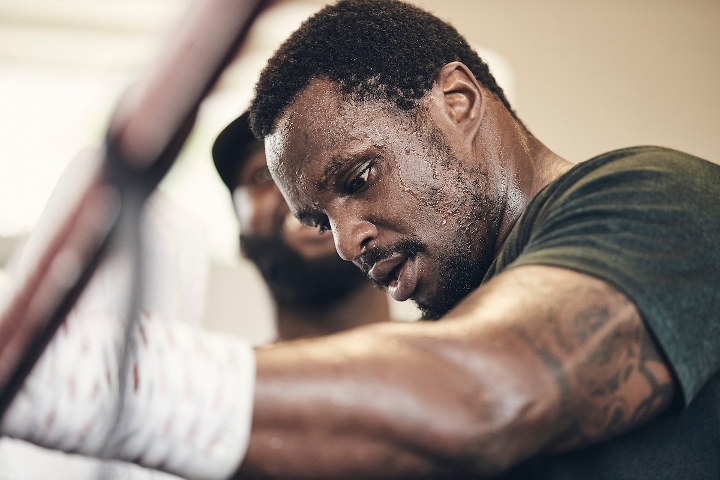 Said suspension along with his participation in a WBC-sanctioned fight were both cited in the WBO’s final ruling.

“As a true WBC World title holder, Whyte will be able to defend its WBC title with a champion of the WBO only with the approval of or ratification by a majority of the [WBC] Board of Governors,” Fernando J. Gierbolini-González, chairman of the WBO Complaint and Grievances Committee explained in the final ruling. “Therefore, if Whyte is confirmed as the WBC Interim Heavyweight World Champion, the WBO cannot rank him as Mandatory Challenger in the Heavyweight Division without the prior approval of or ratification by the majority of the WBC Board of Governors. However, even with the approval of the WBC Board of Governors, any attempt by Whyte to challenge the WBO Heavyweight World Champion under those circumstances, would be consider a Unification Bout under §7 of the WBO-Regulations, which also discards the possibility of considering him to be a Mandatory Challenger in the WBO Heavyweight Division.

“Moreover, ordinarily the WBO and the other principal boxing organizations –WBC, IBF and WBA- do not include in their rankings a World Champion -whether Regular, Super or Interim of another organization for obvious reasons. This means that if confirmed as the WBC Interim Heavyweight World Champion, and therefore considered a true WBC World title holder in the Heavyweight Division, Whyte cannot be included in the rankings nor considered a Mandatory Challenger in the WBO Heavyweight Division.”

Whyte (26-1, 18KOs) began the year as the highest-rated contender by both the WBC and the WBO, yet not recognized by either sanctioning body as its mandatory challenger. An official request for such status was submitted this past March by the streaking heavyweight to the WBO, who did not grant him such honor but did encourage him to remain active.

The concern on the part of Whyte was that Usyk (16-0, 12KOs) would receive the honor ahead of him, having earned “Super” champion status at cruiserweight after fully unifying the division last July. The distinction grants such claimant the right to challenge for a title upon entering a new weight division, with the Ukrainian southpaw having already announced his intentions earlier this year to compete at heavyweight.

Usyk’s foray into the heavyweight division was put on hold after a torn biceps injury ruined plans for a May 25 DAZN headliner in Oxon Hill, Md. It didn’t prevent his team, however, from filing a request with the WBO on June 3 to be named as the mandatory contender, a request which was forwarded to Whyte and his legal team as per his right to challenge.

The sanctioning body named Usyk as its mandatory heavyweight contender on June 22, with the ruling formally appealed by Whyte on July 5, just over two weeks prior to his scheduled bout with Rivas in London, England, with the winner to be guaranteed a shot at unbeaten WBC heavyweight titlist Deontay Wilder by no later than next May.

Both parties fled additional complaints afterward, Usyk on July 22 to dismiss Whyte’s appeal, and Whyte on July 26 to challenge said motion. By that point, word had leaked out of an adverse finding in a June 17 drug testing sample provided by Whyte, who was informed of the development on July 17, three days ahead of his aforementioned win over Rivas. A hearing was held on the morning of the fight, with Whyte appearing before the National Anti-Doping Panel (NADP), who reviewed his case and ultimately cleared him to fight. But, the boxer is still involved in the legal process to fully clear himself of the adverse finding.

Neither Rivas, his team members or anyone at the WBC was notified of the aforementioned events. A provisional suspension was handed down by the WBC pending its own investigation.

The Jamaica-born, Brixton-based heavyweight was offered a title fight with Joshua, who is responsible for Whyte’s only loss which came in Dec. 2015. Whyte rejected the offer, believing he held leverage over Joshua and promoter Eddie Hearn under the assumed belief he would be named the WBO mandatory challenger.

That day never came, nor does it appear to be on the horizon.

For now, the Puerto Rico-based sanctioning body is following the lead of the WBC and will wait out all pending investigations before acting on Whyte’s place in its own rankings.

“If Whyte is permanently suspended by the WBC, the WBO Championship Committee would have ample discretion to take measures against Whyte,” read the complaint. “Conversely, if Whyte is otherwise confirmed as the WBC Interim Heavyweight World Champion, he will be bound by the WBC Rules & Regulations (“WBC-Regulations”), which state that a WBC Interim World Champion shall be considered a true WBC World title for all purposes, other than with respect to a bout versus the actual World Champion, absent any order to the contrary from the WBC in its sole discretion.

“Whyte’s appeal is denied and the WBO Championship Committee Resolution issued on June 22, 2019 is affirmed. The parties are advised that, pursuant to §3 of the WBO-Regulations, this Award constitutes the final decision on the merits of this controversy.”

[QUOTE=_Rexy_;20003868]You know, If someone is arrested for rape, murder, actually ANY CRIME, one DNA sample is all it takes. But we require multiple for Whyte. One sample doesn’t prove anything.[/QUOTE] The a sample is for the cheap but less reliable…

[QUOTE=_Rexy_;20003981]The second one was intended to be sarcasm. We need a font for that.[/QUOTE] We don't. You need to understand what sarcasm actually is and how it fits in the point you are trying to make. It doesn't. Unless you…

[QUOTE=Professor Larry;20003229]lol, keep hope alive[/QUOTE] I was asking a legitimate question...you said he just failed 2 tests leading me to believe that the B sample had come back positive and I had somehow missed it in the news... Is it…

[QUOTE=alexjust;20003974]Not sure what you mean...your first two sentences contradict the 3rd, no?[/QUOTE] The second one was intended to be sarcasm. We need a font for that.

[QUOTE=_Rexy_;20003868]You know, If someone is arrested for rape, murder, actually ANY CRIME, one DNA sample is all it takes. But we require multiple for Whyte. One sample doesn’t prove anything.[/QUOTE] Not sure what you mean...your first two sentences contradict the…