WBC May Order Interim-Title Fight Due To Keith Thurman's Injury

The World Boxing Council is looking at the possibility of opening the door to order an WBC interim-title fight in the welterweight division, after world champion Keith Thurman announced that he underwent elbow surgery that will keep him on the sidelines until the end of the year.

Thurman had surgery on his right elbow, which boxer says is going to take at least six months of recovery time. Thurman, who already held the WBA title, defeated Danny Garcia on March 4 by unanimous decision to add the WBC title to his waist. A few weeks later, he traveled back to New York to have surgery to remove calcium deposits in his right elbow. The surgery was performed on April 19.

“One thing for sure, the doctor doesn’t want me to rush back into action,’’ Thurman said. “You can’t jump back into the race too soon. It might start to feel good after a month or two, but you don’t want to rush it. My right elbow’s job is to launch punches like a missile. It might feel good, but it might not be able to sustain that. It might cause inflammation to develop, and then you have to wait to let it calm down and feel better. I figure a 4-month recovery will be quick. The doctor recommended 6 months of no action, before training. I won’t rush it.’’ 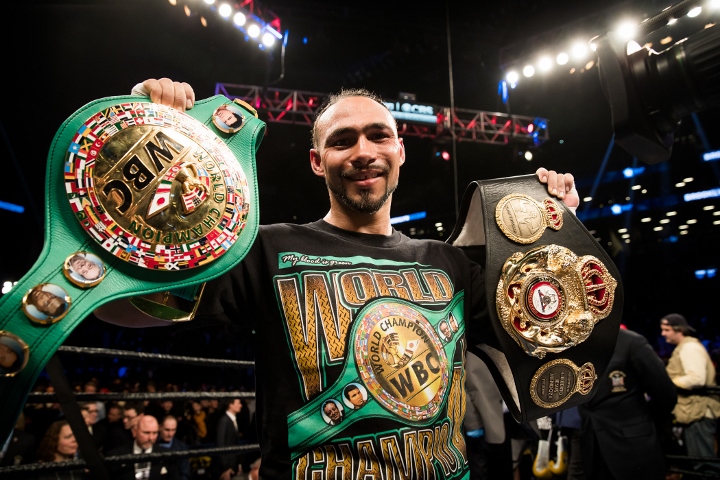 WBC President Maurcio Sulaiman does not want to have the division put on hold while Thurman recovers.

At the moment the mandatory challenger is Shawn Porter. There is also the possibility that WBC/WBO 140-pound champion Terence Crawford moves up, and there is also former champ Danny Garcia who wants another crack at the belt.

"I learned that [Thurman] had the operation and that he will be out of action. We will attend to this matter immediately, we need activity. Shawn Porter is the mandatory challenger - it could be Porter-Crawford, there is also Danny Garcia who lost a close fight. This is important," said Sulaiman to ESPN Deportes.

[B]DANNY GARCIA WILL BE BACK....STRONGER THEN EVER....PORTER VS GARCIA #FIGHTOFTHEYEAR....They have perfects styles that will make A HIGH INTENSITY WAR....Let Keith enjoy some free time...He earned it...Thurman is proven...The winner of this fight will lose to KEITH "ONE TIME THURRRRRRRRRRRRMAAAAAAAANNNNNNNNNNNNNNNNN[/B]

Why does every fight have to be for a belt of some sort? Why can't a great fight like Garcia/Porter be made because it's a good fight? That's the problem now with boxing, too many champions. If Thurman can't defend…

Seems like most of us are in agreement. Danny Garcia vs Shawn Porter would be a perfect way to crown an "interim" champion.

please, make porter-garcia for it

Porter vs Garcia would be a damn good fight