WBC To Explore Idea of Adding Mayweather's Photo To All Belts

Mauricio Sulaiman, president of the World Boxing Council (WBC), revealed that his organization will explore the possibility of adding the photo of Floyd Mayweather Jr. to all future titles that are presented to their champions - as a tribute by the sanctioning body to fighter's legacy.

A few days ago, Mayweather practically demanded that his photo be added to world titles - a request that Sulaiman is considering strongly.

"Floyd is a historic, iconic boxer, just like Muhammad Ali - who is on the [WBC] belt... maybe it's not a bad idea [to also add Mayweather]. There are boxers who represent an era," Sulaiman said. 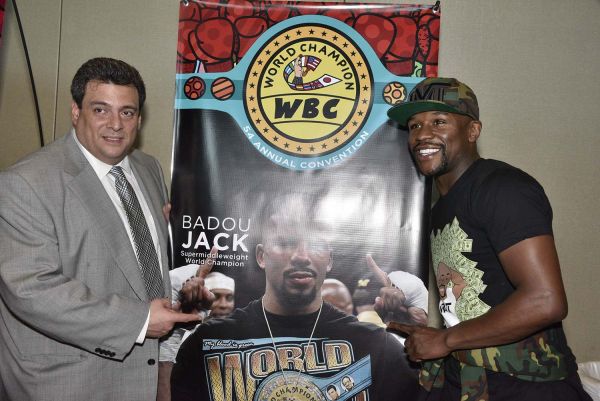 It appeared that Mayweather's career was over in September 2015, when he dominated Andre Berto over twelve rounds and retired from the sport.

But then Mayweather surprised a lot of experts when returned to the ring last August, after a two year retirement, and stopped UFC superstar Conor McGregor in the tenth round in Las Vegas.

The WBC supported that contest and created a "Money Belt" for the contest. The sanctioning body also tabbed Mayweather vs. McGregor as their "2017 Event of The Year."

After that fight, the 40-year-old Mayweather once again announced his retirement and he claims that no amount of money will entice him to return at this stage of his career.

Mayweather captured world titles in five weight divisions and he captured a WBC in each of those divisions - super featherweight, lightweight, junior welterweight, welterweight and junior middleweight. He's also captured several commemorative titles for the organization, like the "Diamond belt."

"Now that Mayweather confirmed his retirement, we can consider something like that," Sulaiman said. "If he is retired he has merit, we will see him, he was a champion in five divisions, he has a lot of merit."

Sulaiman did not reveal a timeline on when they will render a decision on the matter.

TE=Money Loco;18399843]sure buddy!what ever makes your tiny Quezon City vagina feel better![/QUOTE] Now I know what u are - a fool! Next thing you will do is ridicule and insult me some more. I know I shouldn't entertain ppl like…

This seems like a no-brainer to me. He's one of the top 10-20 fighters of all-time and was loyal to the WBC throughout his career.

[QUOTE=khizon;18399206]I referenced Ali since his pic is on the WBC belt. You must be a ***** or a lil kid because grown men don't hate on other men with accomplishments.[/QUOTE]sure buddy!what ever makes your tiny Quezon City vagina feel better!

[QUOTE=Money Loco;18397452]so what if Ali has been stopped? pedquiao will never be as great as Ali! pedquiao only fights for the wbo cause they have no ped testing policy! oh and when your midget troll god got ktfo by Marquez…