The mandate has been delivered to Vergil Ortiz Jr. along with the final reminder of his incredible 2019 campaign.

A press conference held Monday afternoon at Golden Boy Promotions headquarters in Los Angeles wound up serving dual purpose, with the session’s primary function to announce Ortiz’s first ring adventure of 2020. The unbeaten knockout artist from Grand Prairie, Texas will face veteran welterweight Samuel Vargas in the headlining act of a March 28 show to air live on DAZN from The Forum in Inglewood, California.

Prior to Ortiz speaking on the future, he was presented with a piece of the past as Douglass Fischer, editor-in-chief of Ring Magazine awarded him with a plaque honoring him as the publication’s 2019 Prospect of the Year (Ortiz was also bestowed such honors by BoxingScene.com). As humbling as was the moment, it was also an indication that his next fight represents a first step in new territory.

"This is like a diploma,” Eric Gomez, president of Golden Boy Promotions noted to the red-hot welterweight. “You're no longer a prospect. Now you're a contender.” 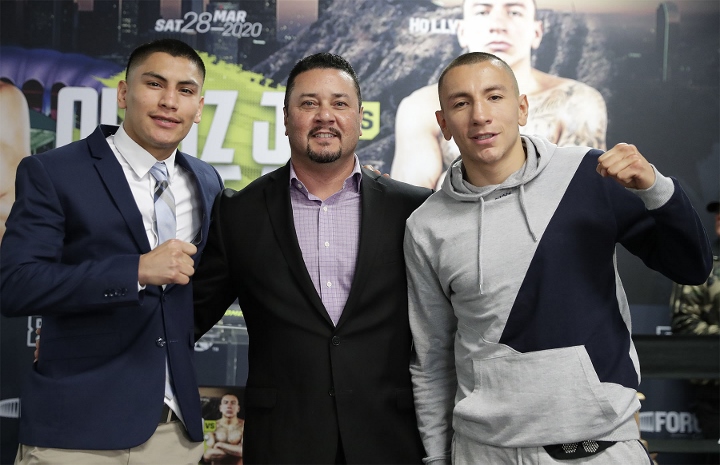 It’s a course of action the California-based plans to fully explore in the year ahead.

“Vergil has really captured the attention of the boxing community,” noted Gomez. “His speed, his power… he's learning new things with Robert Garcia. The kid is incredible and the sky 's the limit.

“He can very easily challenge for a world title alter this year. We will see what happens, but he's ready.”

In all honesty, Ortiz (15-0, 15KOs) probably proved it at least two fights ago. A four-fight campaign in 2019—none lasting longer than six rounds—including stoppage wins over former title challengers Mauricio Herrera and Antonio Orozco, putting an exclamation point on the year with a 5th round stoppage of one-time blue-chip prospect Brad Solomon.

The trio of Herrera, Orozco and Solomon had never previously suffered a stoppage defeat prior to running into Ortiz. While the same cannot be said of Vargas (31-5-2, 14KOs), the 30-year old Colombian welterweight—who lives and trains in Toronto, Canada—comes in as a battle-tested trialhorse whose lone defeats inside the distance have come at the heavy hands of Danny Garcia and Errol Spence Jr. Vargas managed to provide a sturdy challenge versus former titlists Amir Khan and Luis Collazo all within the last 18 months, while having won two of his last three starts.

His credentials are not lost on the young gun who will share ring space with him in March.

“I train for every fight like I'm fighting for a world title,” insists Ortiz. “We don't take anyone lightly. I don't think I'm the most talented fighter, but I do believe I put in the most work. It's just the way you have to do it. Mamba mentality, rest in peace Kobe [Bryant].

“That's how it's going to be on March 28. Sadly, it's three days after my birthday so I won't be able to eat cake, but I will be able to eat afterward.”

Vergil said in a recent interview he feels like Golden Boy is moving him slow in his competition and I agree. Hopefully he can get the top 5 or 6 guys in the sanctioning bodies like he wants so he…

I love Ortiz, but this statement seems a bit odd considering Orozco is definitely better than Vargas and Solomon might be too

He was fighting not to long ago at super lightweight and he said he feels good at welterweight and that he can stay at welter for at least two more years. So were do u get that he’s killing himself…

Seems like a step down in comp from his last 3 opponents - all good for now, this should be a year where he takes a step. I wonder if GBP might match him up with the other prospects they…