Boxing before an adoring hometown crowd, Ortiz knocked out the best opponent he has faced as a professional. The 21-year-old Ortiz dropped Antonio Orozco three times and stopped him in the sixth round of a welterweight fight that was scheduled for 12 rounds in The Theatre at Grand Prairie in Grand Prairie, Texas.

Ortiz (14-0, 14 KOs) was widely considered one of boxing’s top prospects prior to Saturday night, but he hadn’t beaten a current contender during his three-year pro career.

San Diego’s Orozco (28-2, 17 KOs) hadn’t been knocked out before Ortiz stopped him. His lone loss before this defeat was a 12-round, unanimous-decision defeat to Jose Ramirez (25-0, 17 KOs) last September 14 in their fight for Ramirez’s WBC super lightweight title in Fresno, California. 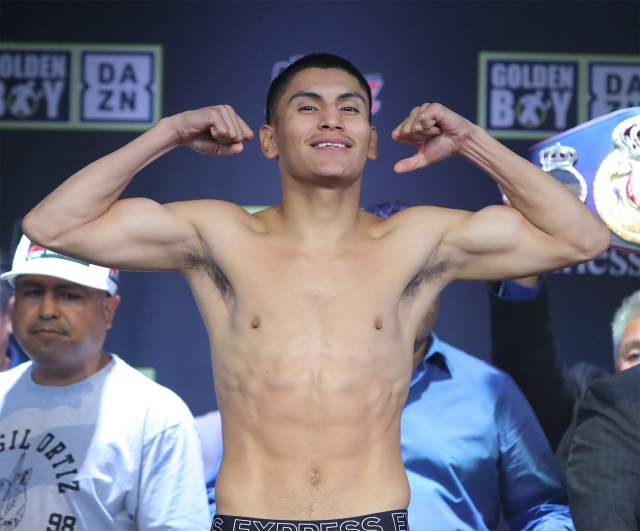 Despite the result, Ortiz wasn’t pleased with his performance.

“I’m gonna be honest, I don’t like the way I did in the fight,” Ortiz told DAZN’s Claudia Trejos during his post-fight interview. “I don’t even know how many rounds we went. That’s how into the fight I was. But I wanna say like the first three, four rounds, I could’ve done a bit better. I definitely got a long way [to go] as a boxer to reach that world champion status. But we’re gonna make those improvements. We’re gonna learn from this fight.”

The 31-year-old Orozco more than held his own against his powerful opponent before Ortiz overwhelmed him in the sixth round.

Ortiz’s left uppercut sent Orozco to one knee 55 seconds into the sixth round. Orozco got up and tried to fight out of the trouble, but that proved to be a mistake.

A right hand by Ortiz made Orozco go down to one knee again, just 20 seconds after the first knockdown. Orozco reached his feet again, this time at the count of nine.

The game Orozco again attempted to fend off Orozco, rather than hold or move. Ortiz’s vicious left hook knocked down Orozco a third time.

Referee Mark Calo-oy stopped the fight at 2:16 of the sixth round, as soon as Orozco fell flat on his back from that punch.

Ortiz couldn’t catch Orozco with any impactful punches in the fifth round, which wasn’t a particularly successful three minutes for Orozco, either. Still, the end of that fifth round meant Ortiz would enter the sixth round for the first time as a pro.

Orozco’s right hand landed to the side of Ortiz’s head late in the fourth round. Ortiz fought off the ropes for a long stretch in the third round, which allowed Orozco to fire hard shots at him.

Orozco caught Ortiz with a left hook in the second round. Ortiz took that shot well and fired back with a right hand that landed.

About a minute into the first round, Ortiz nailed Orozco with a right hand that caused Orozco to squat on the bottom rope, near a neutral corner. It wasn’t counted as a knockdown and Ortiz couldn’t capitalize on having Orozco in that early trouble once Orozco moved away from him.

Later in the opening round, Orozco landed a right hand that backed Ortiz into the ropes. That shot didn’t appear to affect Ortiz, though.

Ortiz felt like he could’ve knocked out Orozco in the opening round had he not rushed himself.

“I just feel like I’ve been getting all these knockouts,” Ortiz said. “I’ve been saying they haven’t been getting to my head, but as you can see in that first round, I got a little excited. Maybe I could’ve ended it, maybe not. But I had to force myself to slow down and you know what? I’m just gonna learn from this fight, like I said."

- -You boys need both a full time day and night job.

[QUOTE=bigdunny1;19981074]You are all over the map and still didn't answer my question. Stop running and answer my question where do you rank Ortiz's defense amongst other prospects? Because it's already better then most of his peers. So Ortiz doesn't have…

[QUOTE=bigdunny1;19981079]Ortiz face wasn't beat up if you think that's being roughed up you need to see what other other fighters face looks like. Orozco offense fell off a cliff compared to any fights in career including Ramirez. And Ortiz's defensive…

[QUOTE=bigdunny1;19981074]You are all over the map and still didn't answer my question. Stop running and answer my question where do you rank Ortiz's defense amongst other prospects? Because it's already better then most of his peers. So Ortiz doesn't have…

[QUOTE=indelible;19980831]Why else do you think Ortiz wasn’t impressed with himself? As for Teofimo, I’m no fan of his but I’m sure you were a former cheerleader of his when he appeared to be a knockout artist till he exposed his…