Usyk vs. Bellew In Play For November 10 in London

Although not yet finalised Boxing Scene understands that these are the details in play for the undisputed cruiserweight champion's first fight since winning the World Boxing Super Series tournament last month in Moscow when he outclassed Murat Gassiev with a shut-out win over the Russian.

A sublime performance from the 2012 Olympic Gold Medallist gave Usyk the IBF and WBA straps making him only the third undisputed cruiserweight champion in history, following in the footsteps of the late O'Neill Bell and fellow three-belt champion Evander Holyfield. 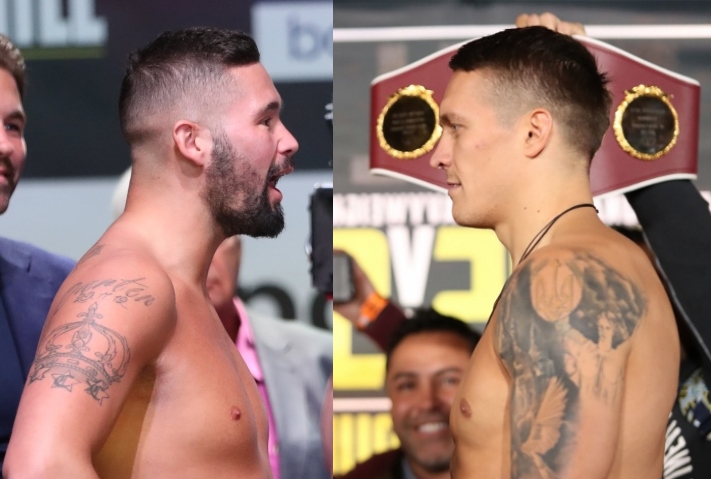 Immediately after picking up all four belts, as well as the Muhammad Ali Trophy given to the winner of the tournament, Usyk turned his attention to Liverpool's Bellew calling out the WBC Emeritus champion.

"I heard Tony Bellew is looking for a fight with the winner of the Muhammad Ali Trophy. I hope he will see me. Tony Bellew are you ready?" Usyk said in the ring afterwards. Bellew responded by saying he would have no hesitation in taking on the Ukrainian.

Bellew's promoter Eddie Hearn has already held discussions with Usyk's team and while the fight has not been signed off it looks like Usyk is the clear front-runner to face Bellew next.

'Rocky' claimed the title last month when effectively walking through Tyron Zeuge displaying too much power winning in the fifth round.

Rumours have surfaced that Fielding could face former IBF champion James DeGale, who recently vacated his title, and while Boxing Scene understands that the Liverpudlian's promoter Eddie Hearn would like DeGale in the opposite corner on the night, no deal is close at the moment.

You would have to pay me $1,000 dollars to watch that crap. Hopefully it is a double knockout and they both retire.

A boring fight with two soft punchers.. Not excited at all

[QUOTE=b00g13man;19035682]I don't think I could live in a world where Bellew becomes undisputed anything. He'd never let us hear the end of it.[/QUOTE] If he can beat a prime beast Usyk I wont mind him never stop talking about it…