Earlier today manager Egis Klimas told BoxingScene.com that there were some issues that were putting the World Boxing Super Series cruiserweight finals(scheduled for next Saturday in Moscow, Russia) between Oleksandr Usyk and Murat Gassiev in jeopardy - (https://www.boxingscene.com/usyks-manager-still-not-sure-if-gassiev-wbss-showdown-go--129931)

But he wanted to make it clear - "Comosa who is the main, main organizer of the tournament, they're helping with the tickets, they're helping with the security issues and the hotel. But the ones who are not cooperating is the Russian side. So Comosa is doing an excellent job, they're trying to help save the fight but the Russian's are not cooperating and they are not organizing."

Its no secret that Usyk, who is Ukrainian, was not happy that this fight was taking place in Gassiev's homeland. 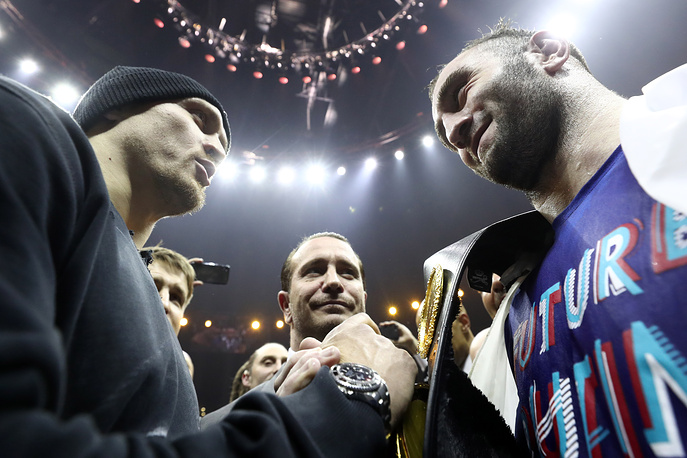 Klimas said of his boxers mindset - "He understands, he knows what's going on but I don't think he pays much attention because he is training and he's getting ready for the fight. That's on my shoulders and the promoters shoulders."

The high powered manager believes Comosa is doing all they can to prod the Russian federation that won the bid for this fight to take care of all the remaining logistical issues.

"I would say so," stated Klimas,"they are the ones who need to do the organizing."

The winner will be the first to lift the Muhammad Ali Trophy, becoming the undisputed unified lineal cruiserweight champion of the world, the first time in history the feat will have been achieved.

Meanwhile, Murat Gassiev (26-0, 19 KOs) comes into the final with the IBF and WBA Super titles, the latter was won by the Russian with a dramatic 12th round stoppage of Cuban fighter Yuniel Dorticos last time out

Can anybody explain what exactly the Russians are doing wrong in this case? In this message, there is no information that would indicate which clauses of the agreement were violated by the Russians.

Man its gonna be such a let down if this fight doesn’t happen. I don’t even care who wins I just really wanna see this fight.

[IMG]https://i.imgflip.com/2e0fdt.jpg[/IMG] Edit: Why is the forum so bad at scaling pics ?

Just found a good Ukrainian source and the reason why Team Usyk protests is because according to WBSS rules the ring size must be 5m x 5m but the Russian side wants a smaller ring with the size 3.5m x…

Now Usyk´s K2 promoter Krassyuk confirms that there is a possibility that the fight won't take place. From day to day it becomes more realistically that it won't take place [url]https://sportarena.com/boxing/promouter-usika-sushhestvuet-veroyatnost-chto-boj/[/url]