Oleksandr Usyk and Derek Chisora are ready to take their friendly rivalry to the ring.

A heavyweight clash seemingly in the works for most of 2020 is finally set to headline this Saturday at SSE Wembley Arena in London, England. The bout had been previously scheduled to take place in May before being postponed due to the ongoing coronavirus pandemic. 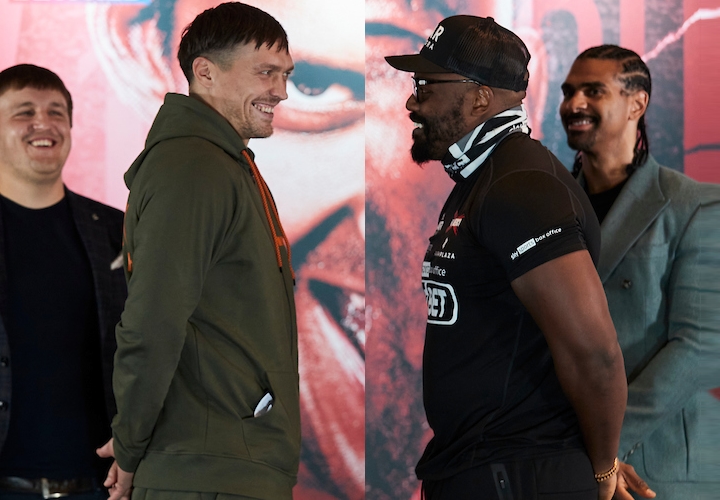 Usyk (17-0, 13KOs) weighed in at a career-heaviest but fighting fit 217 ¼ pounds. The bout marks the second straight fight in boxing’s most storied division for the Ukrainian southpaw, the former World cruiserweight king who weighed 215 for his heavyweight debut last October in a 7th round knockout of Chazz Witherspoon.

Chisora (32-9, 23KOs) arrived in full Halloween spirit, decorated in white paint as he hit the scale at 255 ½ pounds. The mark is the lightest for the 36-year old London-based heavyweight since weighing 246 ¼ pounds in a heartbreaking 11th round knockout loss to Dillian Whyte in their memorable December 2018 rematch.

Three straight wins have followed for Chisora, including a 4th round stoppage of David Price last October.

Usyk is the mandatory challenger in waiting to one of the titles currently held by Anthony Joshua (23-1, 21KOs), whom first faces Kubrat Pulev on December 12. A win for Usyk will keep him in line for his long-sought bid at becoming a two-division champion.

George Kambosos Jr. and Lee Selby are also in pursuit of a major title, with their official title eliminator to determine the next in line for recently crowned lineal champion Teofimo Lopez (16-0, 12KOs).

Both boxers weighed 134 ¾ pounds for the evening’s chief support.

The bout was initially due to take place May 9 in Cardiff, Wales, rescheduled for the summer and then again for earlier this month before being moved to this event.

A planned heavyweight clash between Dave Allen and Christopher Lovejoy was officially canceled due to a contract discrepancy. Lovejoy failed to disclose to event promoter Eddie Hearn his current contract status with Don King which leaves him bound to a long-discussed, yet-to-be-scheduled secondary heavyweight title fight with Trevor Bryan.

Whoever wins cuts no ice very poor PPV fight,one has done nothing and the other don't want to!. Much better news from Ch. 5 as they are screening free a real fight between Davies and Sata Cruz and if you…

I wonder when you try to bs a promoter like Lovejoy did with Eddie & your fight gets canceled do they make you figure out your own way back home or do they fly you back too. Lovejoy might have…

[QUOTE=1hourRun;20847089][IMG]http://i.imgur.com/nNLWESI.gif[/IMG] [img]https://i.imgur.com/eNKh468.jpg[/img] Derek Chisora is dedicating this fight to all you Ashy-Larry's out there who are rolling the dice on him to KO Oleksandr Usyk.[/QUOTE] Haha! You on form lately buddy.

[IMG]http://i.imgur.com/nNLWESI.gif[/IMG] [img]https://i.imgur.com/eNKh468.jpg[/img] Derek Chisora is dedicating this fight to all you Ashy-Larry's out there who are rolling the dice on him to KO Oleksandr Usyk.