Usyk: Anatoly Lomachenko Trains Me, With Me Every Day In Camp

Given the opponent and how the fight played out, there seemed to be less curiosity about Oleksandr Usyk’s first pro experience as a heavyweight than whom exactly helped him prepare for the occasion.

The 2018 Fighter of the Year former World cruiserweight champion enjoyed a successful debut in boxing’s most storied division, stopping late replacement Chazz Witherspoon after seven rounds Saturday evening at Wintrust Arena in Chicago, Illinois. The DAZN-streamed main event was predictably one-sided but not without its bumps along the way, as Usyk had to contend with bruising around his right eye in eventually overwhelming Witherspoon.

Through it all, the Ukrainian southpaw kept a cool head—largely from self-discipline but also through instructions and reassuring advice from his corner in between rounds.

“I think it was a good performance,” Usyk (17-0, 13KOs) said of his first fight above cruiserweight. “Most important, I followed all of my corner’s instructions.” 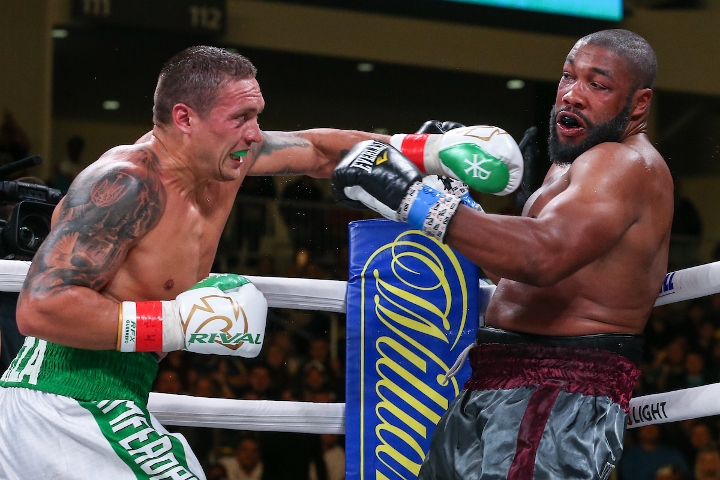 Once again, it was renowned cutman Russ Anbar taking the lead in Usyk’s corner on fight night. However, that’s not to be confused from whom has been training the gifted boxer.

“(Anatoly Lomachenko) trains me,” Usyk confirmed to reporters on hand during the post-fight press conference.

The elder Lomachenko has surfaced in Usyk’s corner on fight night for past bouts after the 32-year parted ways with previous trainer James Ali Bashir in 2017. His presence has been lacking in recent bouts, but his influence very much remains intact.

“You don’t see him on fight night, but he trains me,” confirmed Usyk. “He’s with me every day in training camp.”

[QUOTE=BIGPOPPAPUMP;20121354]Once again, it was renowned cutman Russ Anbar taking the lead in Usyk’s corner on fight night. However, that’s not to be confused from whom has been training the gifted boxer.[/QUOTE] Russ Anbar is only a cutman. Usyk's current head…

Nice, that's what I want to hear