Wallin sure wasn’t Tom Schwarz, either.

The rugged Swedish southpaw provided some troublesome moments for the lineal heavyweight champion, who fended off the previously unbeaten, unproven Wallin to win a 12-round unanimous decision at T-Mobile Arena. England’s Fury fought through a nasty cut over his right eye for nine-plus rounds and another laceration along his right eyelid.

He began wearing down Wallin in the championship rounds, but Wallin buzzed Fury with a left hand early in the 12th round. Fury regained his senses, though, and made it to the final bell.

“It was a great fight,” Fury told ESPN’s Bernardo Osuna after the fight. “You know, I got caught early on with the inside of the glove, on the eyelid, which cut the eye, changed the fight completely. For a majority of the fight, I couldn’t see out me [right] eye. And then southpaw-orthodox clash, clashed heads and gave me a second cut. I’ve not seen the cut, but it feels quite bad. But, you know, I am a gypsy warrior! This is Mexican Independence Day! Come on, Mexico! Viva Mexico!”

The 6-feet-9, 254¼-pound Fury (29-0-1, 20 KOs) was a 25-1 favorite Saturday at MGM Grand’s sports book, but this supposed tune-up fight wasn’t nearly that easy. It didn’t at all resemble his previous appearance in Las Vegas three months ago, either.

That fight resulted in a second-round blowout of Germany’s Schwarz, another unbeaten but untested opponent, June 15 at nearby MGM Grand Garden Arena.

While Wallin (20-1, 13 KOs, 1 NC) undoubtedly established himself as a legitimate contender, Fury secured his place in a contracted rematch with WBC champion Deontay Wilder (41-0-1, 40 KOs). That rematch also is dependent upon Wilder winning another rematch against Luis Ortiz (31-1, 26 KOs, 2 NC) on November 23 at MGM Grand Garden Arena. 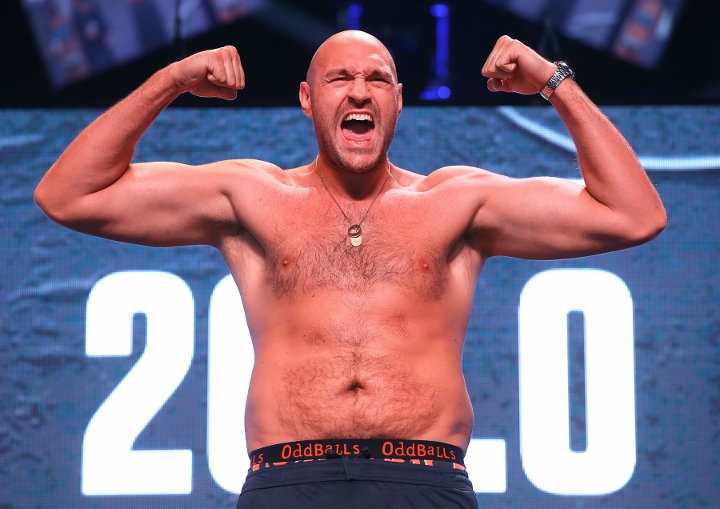 Wilder and Fury fought to a split draw December 1 at Staples Center in Los Angeles. Fury survived two knockdowns – one apiece in the ninth and 12th rounds – to reach the final bell that night.

Once Fury reached the final bell again Saturday night, he had out-landed Wallin by 52 overall punches, according to unofficial CompuBox statistics.

“I tried my best,” Wallin said, “and Tyson is a great champion.”

Wallin said he opened Fury’s disgusting cut with a punch during the third round. In accordance with Association of Boxing Commission’s rules, Fury would’ve been declared a technical-knockout loser if the fight were stopped due to a cut caused by a punch.

The 6-feet-5, 236-pound Wallin appeared spent by the 11th round, but he came back to hurt Fury with a left hand 38 seconds into the 12th round. That shot clearly affected Fury, and Wallin followed up with a right hand that backed Fury into a neutral corner.

Fury eventually moved and held his way out of the trouble, and made it to the final bell.

A fatigued Fury landed numerous head and body shots on Wallin in the 11th round. Wallin was more tired than Fury, and did little in those three minutes other than take punches and hold Fury.

Wallin was wearing down during the 10th round, when Fury landed several vicious head and body shots on him. Fury seemed intent to stop Wallin during that round, but Wallin showed a tremendous chin and took everything Fury threw.

Fury snapped back Wallin’s head with a jab a little more than a minute into the ninth round. Wallin wasn’t hurt then, or when Fury snuck a right hand around his guard with just over a minute to go in the ninth.

A left uppercut by Fury knocked Wallin off balance just before the ninth round ended.

Wallin and Fury spent some of the eighth round wrestling and trying to land hard shots from the inside. Fury eventually backed Wallin into his own corner, where he landed a hard right and then a left.

Fury attacked Wallin at the start of the seventh round and landed a hard right hand to the side of Wallin’s head. Wallin withstood that attack, fought back and waved Fury forward toward the end of that round.

A ringside physician looked at Fury’s nasty cut with over a minute to go in the sixth round. Once the action resumed, Fury fought with a sense of urgency because he knew how bad the cut looked and felt.

Weeks warned Wallin for rubbing the palm of his glove on Fury’s face just before the sixth round ended.

Wallin landed a left hand that backed Fury into Wallin’s corner less than a minute into the sixth round. Weeks warned Fury a few seconds later for holding and shoving Wallin.

A right uppercut by Fury caught Wallin with 55 seconds to go in the fifth round.

Fury wiped away at a bothersome cut over his right eye at points in the fourth round. The blood flowed sideways, not into his eye, but it clearly troubled him.

Fury cracked Wallin with a hard, overhand right with about 15 seconds to go in that round.

An aggressive Wallin attacked Fury at the start of the third round, when Wallin backed Fury into the ropes. Fury drilled Wallin with a straight right when there was just over one minute to go in the third.

At some point during the third round, Fury suffered a deep gash along his right eyebrow.

About 45 seconds into the second round, Fury switched to a southpaw stance to try to throw off Wallin. Fury landed a hard left hand up top with just under a minute to go in the second round.

Another left Fury landed several seconds later made Wallin retreat to the other side of the ring. He also caught Wallin with a counter right hand before the second round ended.

As Fury moved backward, Wallin landed a straight left hand just before the halfway point of the first round. Fury didn’t throw many punches in those first three minutes, when he mostly moved away from Wallin.

Wallin was undefeated before fighting Fury, but he hadn’t been tested against a championship-caliber opponent. He also had boxed less than one round in the past 17 months.

Wallin went 12 rounds in April 2018, when he defeated domestic rival Adrian Granat (15-2, 14 KOs) by unanimous decision in Sundsvall, Sweden, Wallin’s hometown. His subsequent bout, just short of a year later, lasted less than one round.

That fight resulted in a no-contest April 13 because his opponent, Nick Kisner, suffered a cut in the first round that prevented him from continuing in that 10-rounder in Atlantic City, New Jersey. His next fight, a 10-rounder against 40-year-old BJ Flores scheduled for July 12 in Tacoma, Washington, was canceled the day of that fight because the Washington State Department of Licensing wouldn’t approve Flores due to an undisclosed medical issue.

“Big congratulations to Otto and I just wanna say rest in peace to his father,” Fury said, referring to the May 22 death of Wallin’s dad, Carl. “I know he’d be very, very proud of the performance that Otto Wallin just did. That’s a great Swede! The Viking Warrior!”

[QUOTE=juggernaut666;20075612]Yea I just wanted it noted...bf the fight I said how dangerous Wallin was for Fury. I might actually go see Wallin since hes now in my hood ,even walked past my old dry cleaners so I know hes around.…

[QUOTE=LoadedWraps;20075626][COLOR="Navy"][FONT="Comic Sans MS"]If you run into him, ask him what it was like to share the ring with the boogeyman of the division, the second coming of Ali, Sweet Pea in Goliaths body, the HW Locche, boxing's Thanos, boxing's Achilles.[/FONT][/COLOR][/QUOTE]…

[QUOTE=juggernaut666;20075612]Yea I just wanted it noted...bf the fight I said how dangerous Wallin was for Fury. I might actually go see Wallin since hes now in my hood ,even walked past my old dry cleaners so I know hes around.…

[QUOTE=billeau2;20063670]I meant the healing process for the eye. I never addressed his cut and a stoppage, but I will now: Yeah lol, that fight would normally have been stopped. DEFINITELY! Im torn... Im glad they didn't but it was caused…