Those postponements followed announcements earlier Thursday that a Premier Boxing Champions card scheduled for Saturday night in Oxon Hill, Maryland, will not take place and that the California State Athletic Commission won’t allow combat sports events through the end of March. Arum had hoped his two shows would proceed as planned, though without audiences, because almost all of the boxers scheduled to compete already had arrived in Manhattan. 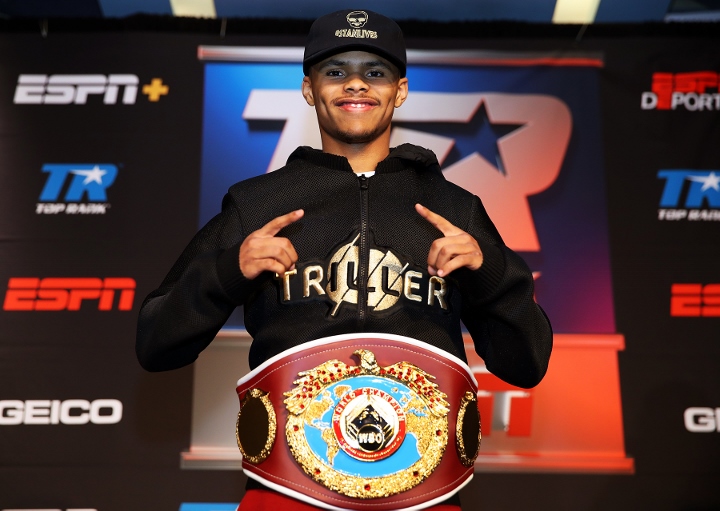 The card Tuesday night was supposed to feature Northern Ireland’s Michael Conlan (13-0, 7 KOs), a featherweight contender who was scheduled to meet Colombia’s Belmar Preciado (20-2-1, 13 KOs) in a 10-round main event. Conlan-Preciado was slated to headline an ESPN+ stream on St. Patrick’s Day (8 p.m. ET/5 p.m. PT).

FS1 was supposed to televise the aforementioned PBC show Saturday at 8 p.m. ET/5 p.m. PT. Former junior middleweight contender James Kirkland (34-2, 30 KOs), of Austin, Texas, was scheduled to face Fresno’s Marcos Hernandez (14-3-1, 3 KOs) in the 10-round main event of that card at MGM National Harbor, just outside of Washington, D.C.

The boxing postponements were made after an unprecedented 24-hour period during which the NBA, NHL and Major League Baseball temporarily suspended operations due to the coronavirus pandemic. The NCAA also canceled its men’s and women’s college basketball tournaments Thursday, following announcements by most affiliated leagues that conferences tournaments, many of which had already started, were canceled.

This is the notice I was waiting to put the seal in the deal. This confirm me all I need for now. :cop:

[QUOTE=Squ□redCircle34;20460031]Do what you gotta do! I’m already on moves, call your doctor for a check up and then when they not in the room, close the door and take the sanitation wipes, masks and gloves and sell them for 4$…

[QUOTE=Squ□redCircle34;20460031]Do what you gotta do! I’m already on moves, call your doctor for a check up and then when they not in the room, close the door and take the sanitation wipes, masks and gloves and sell them for 4$…

[QUOTE=Corelone;20459631]The virus isn't killing fighters. Put it on tv, blue screen a crowd if they have to.[/QUOTE] LMAO. Post of the year!