Philadelphia southpaw Tevin Farmer pursues his 21st consecutive victory and second straight knockout in as many IBF 130-pound title defenses against Francisco Fonseca on the undercard of Rocky Fielding’s WBA “regular” super middleweight title defense against Canelo Alvarez, who will pursue a third crown in as many divisions on December 15 at Madison Square Garden in New York.

“Tevin Farmer has a great story but more importantly to me the man can really fight,” said Eddie Hearn of Matchroom Boxing USA and DAZN, which is streaming the event. “He showed great heart to...go to Australia to win the title – and now the world is his oyster. We are going to keep him nice and busy..." 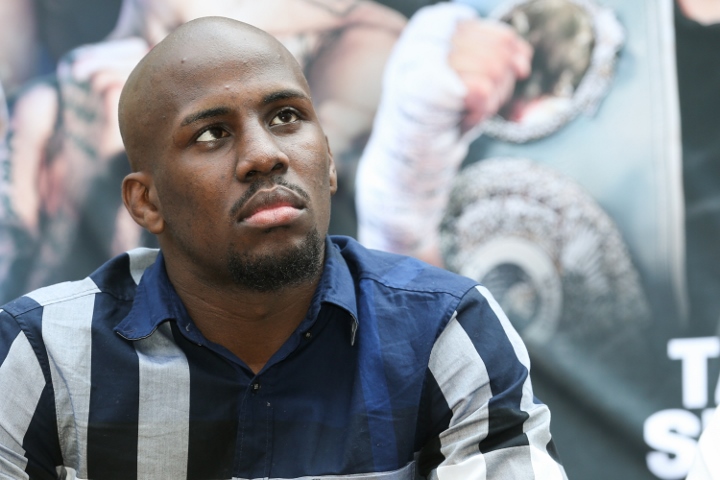 Last month, Farmer scored two knockdowns during a fifth-round KO of Ireland’s James Tennyson (22-3, 18 KOs), ending the loser’s six fight winning streak, including five knockouts in a row. Tennyson was Farmer’s first KO since an eighth-round stoppage of Daulis Prescott in August 2015, a span of 38 months.

“I’m fighting three championships in five months. Punching power’s a definite improvement over my past two fights. I’ve been sitting down on my shots and turning them over,” said Farmer, 28, who enters his third title fight in five months. “I’m in my prime and as sharp as I’ve ever been. I just want to get better and better, so I don’t have time to take off. This shows I’m hungry, disciplined and I want it. I’m grinding and learning on the job every day.”

“Fonseca got stopped, but he’s still in his prime and hung in there with Gervonta,” said Farmer's co-promoter Lou DiBellaof Fonseca, who was last in action for a fifth-round TKO of Sandro Hernandez in August. “Somewhere down the line, Tevin is going to wind up fighting Gervonta, so this is a very good measuring stick for Tevin and a very real title defense.”

Farmer has gone 20-0 with five knockouts since October 2012, when a seventh-round TKO as a late replacement to Puerto Rican Olympian Jose “Sniper” Pedraza improved the winner to 11-0 with seven knockouts.

Farmer was 7-4-1 with 1 KO after falling to Pedraza, rebounding in 2013 by going 7-0 with two knockouts, including a unanimous decision over previously unbeaten Camilo Perez that October.

“Tevin had been thrown to the wolves as a pro when I got him on a week’s notice for Pedraza,” said DiBella. “But even at 7-3-1, he gave Pedraza a great fight. I knew he had skills."

Farmer went 3-0 with one knockout during both 2014 and 2015, and 4-0 in 2016, improving his overall mark to 24-4 with five KOs. DiBella signed Farmer following his June 2014 unanimous decision over Emmanuel Gonzaelez, who was 14-0 with seven knockouts coming in.

“Tevin toyed with Gonzalez,” said DiBella. “He was putting on a boxing clinic, so I’m saying to myself, ‘Who is this, Pernell Whitaker?’”

Angelo Luna was 10-0-1 with six knockouts, and Prescott, 30-2 with 22 KOs, before losing to Farmer by unanimous decisions and stoppage in April and August 2015.

Farmer scored three knockdowns during a unanimous decision over former 130-pound world champion Gamaliel Diaz in March 2016, earned another unanimous decision in July 2016 over Ivan Redkach, and won the same way in December 2016 against Dardan Zenunaj. Redkach was 19-1-1 (15 KOs) coming in, and Zenunaj, 14-2 with nine stoppages before the loss.

“Do the research on the competition I faced coming up, and I’ve never has it easy,” said Farmer, who faced Dib following a unanimous decision in April 2017 over Arturo Santos Reyes.

“But the hard road gave me the experience I’ve needed to make a lot of fights look easy. I used to train three and four times a day from sun up to sundown. I have a good team, talent and I work hard.”

Room was created for Farmer on the card after Canadian-based IBF 175-pound champion Artur Berterbiev (13-0, 13 KOs) cited to speedy a turnaround as his reason for pulling out of a scheduled second defense against Joe Smith (24-2, 20 KOs), whose biggest career victories were first- and eighth-round stoppages of former title challenger Andrzej Fonfara and two-division champion Bernard Hopkins in June and December 2016.

The 33-year-old Beterbiev is coming off last month’s fourth-round stoppage of Callum Johnson (17-1, 12 KOs), scoring first- and final-round knockdowns but being dropped, himself, in the second. Johnson’s run of four straight knockouts (three in the first round) was ended by Beterbiev, who could yet defend against Smith in February.

“Canelo is one of the best fighters in the world, and that means a lot of people will be watching me," said Farmer. “I’m looking forward to displaying my skills to new fans. Once they see me, they’ll realize I’m the best fighter in the world in my division.""

fonseca? wtf. that tank davis fight was awful. davis pretended to be on acid, and fonseca went down on a hook that barely grazed the back of his head--not very convincing. what a weird and farsical night.

I have sparred with Fonseca several times but Farmer is one of my favorites, still I'm gonna root for my country boy but I think that Farmer will outclass him, however Fonseca has gotten stronger since the Davis loss, he…

Active against tomatoe cans, anybody can do that, bum bash in December, especially the main event

Second consecutive defense of his paper belt against an opponent that isn't even top 25. Farmer is becoming a joke.