Eight weeks after tearing through James Tennyson, Farmer fought toe-to-toe with Francisco Fonseca throughout their 12-round bout. Neither fighter appeared to hurt his opponent, but Farmer was the busier, more accurate puncher and won a unanimous decision on the Canelo Alvarez-Rocky Fielding undercard at Madison Square Garden.

Judges Julie Lederman, Waleska Roldan and Don Trella preferred Farmer’s craftiness and scored their fight exactly the same for the skillful southpaw, 117-111. Lederman, Roldan and Trella each scored nine of the 12 rounds for Farmer. 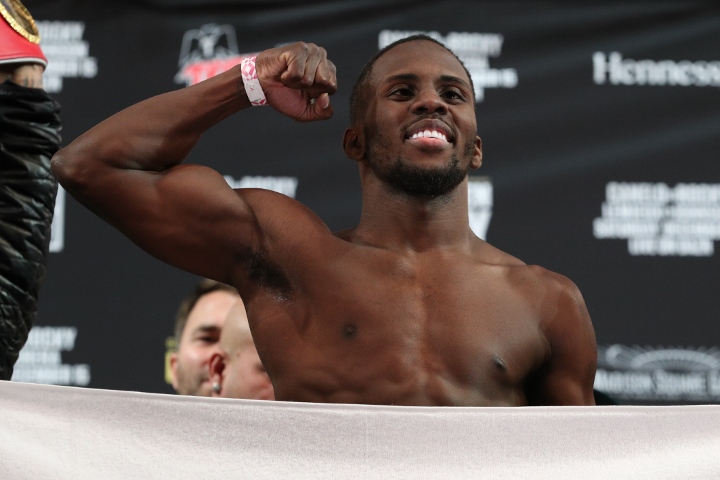 Philadelphia’s Farmer (28-4-1, 6 KOs, 1 NC) made the second defense of the IBF junior lightweight title he won by out-pointing Australia’s Billy Dib on August 3 in Sydney. Costa Rica’s Fonseca lost for just the second time as a pro (22-2-1, 16 KOs).

The fight was contested almost exclusively on the inside, as Farmer and Fonseca banged away at one another to the head and body from close distances. Fonseca suffered a cut over his right eye during the sixth round, seemingly from an accidental clash of head, but that laceration didn’t appear to impact his vision.

Fonseca consistently came forward, but he couldn’t land a shot on Farmer hard enough to change the complexion of their fight.

Farmer fought for the second time in eight weeks. He defended his IBF 130-pound crown for the first time October 20, when he battered Tennyson to the body and stopped Tennyson (22-3, 18 KOs) in the fifth round at TD Garden in Boston.

Fonseca had won three straight fights after Gervonta Davis knocked him out in the eighth round of their fight on the Floyd Mayweather Jr.-Conor McGregor undercard in August 2017 at T-Mobile Arena in Las Vegas.

The Farmer-Fonseca fight moved into the co-featured slot on Saturday’s card once David Lemieux withdrew Friday from his 10-round middleweight fight against Tureano Johnson (20-2, 14 KOs). Montreal’s Lemieux (40-4, 34 KOs) was so severely dehydrated Friday morning, he was taken to a Manhattan hospital.

Solid fight by two solid pros. Farmer continues to stay busy, improve and impress. Nice defense and a good selection of punches. He was pushed last night and he needed this kind of fight. Congrats to Francisco for showing he…

Fonseca was doing some great body work. I don't think the score was that lopsided. Farmer is really good but he needs to be more consistent. Tank would beat him easily. So would Lomachenko.

Without knockout power, Farmer is too limited. No one can stay in the elite club too long these days without being able to KO at leas 50% of the time. Fans get bored watching good fighters beat on each other…

Second consecutive weekend where a fighter that goes the full 12, was previously KO'd by Tank in the 8th! Coincidence?