After Joseph Diaz Jr. won a convincing unanimous decision over Tevin Farmer to take his junior lightweight world title on Jan. 30 in Miami, Farmer exercised his contractual right for an immediate rematch. But if the contract is honored there is a chance there will be no title at stake.

IBF president Daryl Peoples on Tuesday sent a letter to all IBF-registered promoters scheduling a purse bid for a fight between Diaz and Russian mandatory challenger Shavkat Rakhimov.

The letter, a copy of which was obtained by BoxingScene.com, said that on July 7, the IBF received a letter from attorney John Hornewer on behalf of Rakhimov indicating that they “were no longer willing to participate in negotiations and requested an immediate purse bid.” Therefore, Peoples scheduled the purse bid to determine promotional rights for the fight for Jan. 14, 2021 at 12 p.m. at the IBF offices in Springfield, New Jersey, although the sides could make a deal up to 15 minutes before the bids are unsealed. 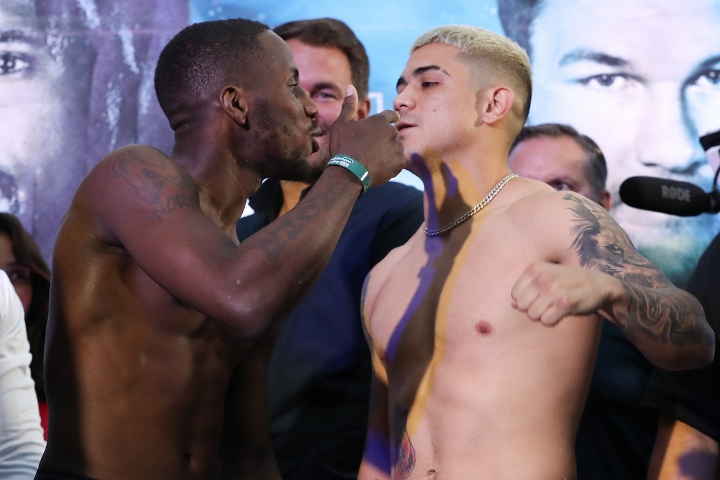 But if Diaz is forced to live up to the terms of the rematch clause with Farmer, and does not fight Rakhimov next, the IBF probably would strip him of the belt.

However, there appears to be plenty of time for the camps to work things out because, in an usual move, the IBF scheduled the purse bid six months following Tuesday’s order, far longer than the usual length of time, which is usually just a few weeks.

Lou DiBella, who co-promotes Farmer with Eddie Hearn of Matchroom Boxing, told BoxingScene that Diaz and his management team pushed the IBF to order the mandatory bout behind promoter Golden Boy’s back, believing it was a way to avoid an immediate rematch with Farmer that Diaz has shown little interest in. The sanctioning bodies have not been ordering mandatory fights because of the coronavirus pandemic that has so dramatically slowed boxing down, not mention that with travel restrictions in place it is difficult to organize bouts between fighters from different countries.

“I can’t be mad at the IBF for ordering the fight for two reasons,” DiBella said. “One, they have rules and I have always taken advantage of their rules when they were in my favor and when you do a contract with a rematch clause in an IBF title fight you always know you may have issues with a mandatory and that the IBF title is at risk.

“Second, (Diaz promoter) Golden Boy knows they made the deal that included an immediate rematch clause with or without the title. Golden Boy has been true to what the deal is. They have said, ‘We respect Farmer’s contractual right’ because they know that JoJo Diaz would not have gotten the title shot without that being in the contract. But JoJo Diaz went renegade and he and his management went to the IBF and asked them to order the mandatory because they did not want the immediate rematch and claimed they didn’t have a deal with Golden Boy for the immediate rematch, which is not true.”

In a May interview with BoxingScene, Diaz (31-1, 15 KOs), 27, a southpaw from South El Monte, California, said he hoped to make his first defense against Abner Mares (31-3-1, 15 KOs), the former three-division world titlist with a big name, but acknowledged that he owed an immediate rematch to Farmer (30-5-1, 6 KOs), 29, of Philadelphia.

“Tevin Farmer is saying that I’m trying to dodge him or trying to duck the rematch. I’m not even trying to do any of that,” Diaz said in May. “My thought is I beat him fair and square and I feel like there’s nothing he can do any different that could overcome that. I’m willing to fight him again and I know there is a rematch clause and I know that a fight with me and him is gonna be made again. But it’s gonna be the exact same outcome.”

Golden Boy Promotions president Eric Gomez said he received the letter about the purse bid from the IBF and was surprised that it was sent six months ahead of time but declined to say whether he believed Diaz and his management asked the IBF to order the mandatory fight.

“I’ve never seen anything like that but I’ve also never lived in a pandemic, so I’m sure it’s understandable for what’s going on now,” Gomez said of the order being sent six months prior to a purse bid date.

“We are reaching out to the other side to see if the Russian fighter can get a visa because he would need one to come to the U.S. for the fight if the fight was here and we also would have to find out if Joseph could even travel out there if the fight was in Russia because there are so many travel restrictions in place.

“As for the rematch situation (with Farmer), we will have to look into that as well. We have had conversations with Lou DiBella and Eddie Hearn and we’ll have to follow up now that we have that letter. We have to untangle everything. In the next week or so we will look into what is next. We’re going to have to talk to JoJo and figure everything out.”

DiBella said all Diaz has done is force a situation that might lead to his being stripped since he is bound to fight Farmer next with or without the 130-pound belt.

“JoJo is working against his own interests,” DiBella said. “He should fight a meaningful fight for good money instead of one for probably a lot less money against a guy nobody ever heard if. But we are not giving up Tevin’s right to a rematch whether it’s for the title or not. With or without the title, there is an immediate rematch but Golden Boy and JoJo have to get on the same page.

“Diaz is going to be fighting Tevin next. We made a specific deal that always contemplated running it back if Tevin lost with or without the title. Golden Boy knows that and isn’t challenging that. They’ve been stand up. Eddie knows what the contract says and so does JoJo. If JoJo wasn’t going to give Tevin the rematch clause he shouldn’t have fought for the title.”

The southpaw Rakhimov (15-0, 12 KOs), 25, is coming off an eighth-round knockout win over South Africa’s Azinga Fuzile on Sept. 29 in East London, South Africa, in the title elimination bout that made him the IBF’s mandatory challenger.

[QUOTE=boogbx;20658716]Nobody cares about Tevin Farmer. He’s been a average fighter that has gotten more air time than necessary. He got beat soundly and nobody cares to see him fight. He needs to shut up and grind his way back to…

JoJo splattered this dude.. Farmer only beat up on scrubs.. no one wants to see part 2

Nobody cares about Tevin Farmer. He’s been a average fighter that has gotten more air time than necessary. He got beat soundly and nobody cares to see him fight. He needs to shut up and grind his way back to…

Diaz did win clearly but I'd like to see them fight again. Ppl writing Farmer off, but psychologically he looked odd... I think he can make adjustments from that performance. I think he's a more capable fighter than what he…