Terri Harper lived up to her nickname as she made the first defence of her title.

The IBO female super-featherweight champion was in action at Manchester Arena on Saturday night against Viviane Obenauf, exclusively live on Sky Sports and DAZN.

Harper, who was celebrating her 23rd birthday on the day of her fight, outpointed the Swiss-based Brazilian, as part of the supporting cast to Katie Taylor’s challenge of WBO female world super-lightweight champion Christina Linardatou and Anthony Crolla’s farewell against Frank Urquiaga for the vacant WBA Continental lightweight title. 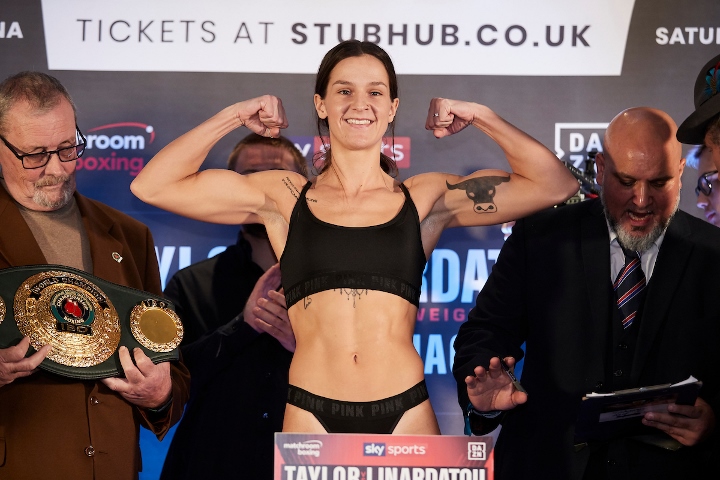 ‘Belter’ got the win after putting in a near-flawless display against the reigning WBA International champion –– who last year knocked out Natasha Jonas inside four rounds in Cardiff –– and came away with a decision on all three judges’ scorecards by margins of 99-91, 99-92 and 97-93.

Also on the card, Martin Bakole got his second win in as many weeks.

The heavyweight, who recently inked a promotional deal with Eddie Hearn and Matchroom Boxing, was last in action in Newcastle just two weeks ago.
Bakole took on and stopped former heavyweight contender Kevin Johnson inside five rounds.

The Scotland-based man, from the Democratic Republic of Congo, was back with a bang when he faced America’s Rodney Hernandez.

Bakole, who was added to the card during fight week after the withdrawal of Joshua Buatsi from his WBA world light-heavyweight title eliminator against Blake Caparello through illness, got rid of his man after just two minutes and 50 seconds in the second round and now holds a ledger of 15-1 with 12 quick, while Hernandez slipped to 13-9-2 with four early in defeat.

Cash vs Cullen is an all out war