Terence Crawford Aims For a Showcase Win Over Benavidez

Jose Benavidez Jr. is a good fighter. A 27-0 record that includes 18 knockouts doesn’t usually lie, even if it can fib a little at times. But there is no indication that he will enter the ring at the CHI Health Center in Omaha on Saturday night and take Terence Crawford’s WBO welterweight title.

That’s not an indictment of Benavidez. It’s more the reality that Crawford will be favored against practically anyone competing at 147 pounds. That’s both a blessing and a curse for “Bud,” who has reached that rarified air once occupied by Roy Jones Jr., where the result is never in question but the opportunity to see the man work is still reason enough to tune in.

Crawford earned his spot at the top by cleaning out the 140-pound weight class, capping off his dominant run with a blistering third-round knockout of Julius Indongo in August 2017. With nothing left to prove at junior welterweight, Crawford moved up to welterweight and stopped Jeff Horn in nine rounds in June to add a new belt to his trophy case. It was typical Crawford despite the added poundage, but while getting all the belts at 140 proved to be a fairly smooth process business wise, that isn’t expected to be the case in his new division, where Errol Spence, Shawn Porter and Keith Thurman all fight under the PBC banner.

“I just want to make this crystal clear,” he said during a recent media teleconference. “Regardless of your affiliation, we will take on all comers. That's it. We don’t care where you are, what you do. We will go and take on all comers, right? Terence is an elite fighter. He is at that class. In fact, when there was a big welterweight fight, a nice welterweight fight in early September, all they did was talk about Terence Crawford. We thank them for that. 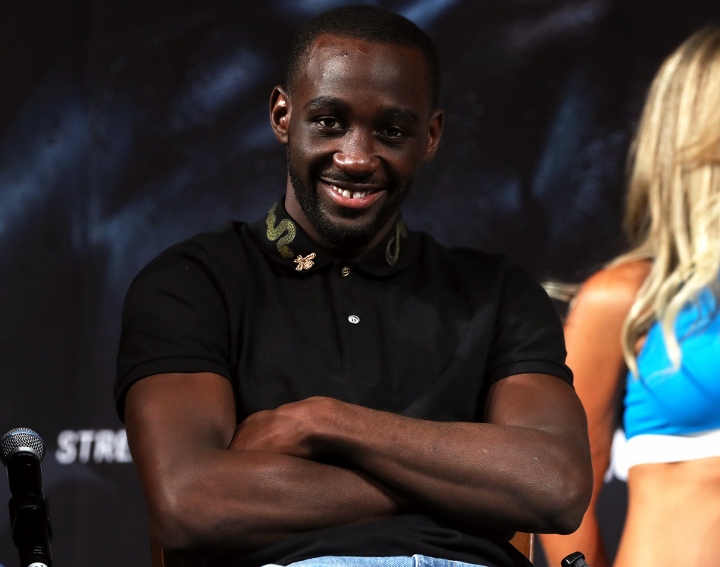 It’s a positive sign, but sitting down and hashing out the fight everyone wants to see – Crawford vs Spence – will likely take some time, which is fine, and some marinating, which isn’t as fine. But it’s a necessary evil to make this major fight as lucrative as possible.

In the WBA, that would be the currently sidelined Keith Thurman, and while Crawford against PBC standouts Thurman, Porter and Danny Garcia would all be intriguing matchups, Spence is the fight all parties involved seem to want.

“Right now, the biggest name in the welterweight division is Errol Spence,” said Crawford’s trainer / manager Brian McIntyre. “So, what we would do is, and I'm glad Todd is on this call, they just put the pressure on ESPN as a leader in sports. They want to be the leader in boxing. If they want to be a leader in boxing, they're going to go out and make those fights happen. And so that's what Terence wants. They want Terence to be the number one fighter in the world.”

Crawford may already be the number one fighter in the world. But the world outside the boxing bubble won’t know that until he fights and beats the big names in his new weight class. It’s something Team Crawford is well aware of.

So while duBoef and McIntyre take care of the business outside the ring, Crawford will lace up his gloves and take care of his inside it this weekend. He’s heard all the talk of the SuperFights down the line. But nothing happens without a win over Benavidez in his Omaha hometown.

“I don’t pay attention to it,” he said of the chatter about future bouts. “My main focus is on Benavidez. As you can see, he's been doing a lot of talking, but while he's talking, I'm working. So, I'm not worried about nothing that he's saying or that he's trying to hype up. I'm focused and I'm ready to go.”

And when he does step through the ropes, it will be a reminder that no matter the opponent, the same Terence Crawford shows up. There is no taking his foot off the gas against a lesser foe or becoming a lead foot against a fellow champion. It’s why he’s a special fighter. Because he’s never forgotten that anyone can get hurt by an opponent with two fists.

Unless you get them first.

“Like I said, talk is cheap,” he said. “Come next week, all the talking and all the answers that everybody wants to ask about the fight will be answered. I really don’t have nothing to say about the guy. Come fight night, you know I'll be ready.”

[QUOTE=Fists_of_Fury;19181407]Crawford is nowhere near Roy Jones Jr. in his prime. Roy actually fought some good fighters. Had to stop reading after that utter nonsense.[/QUOTE] Crawford is a better boxer. Roy was more gifted

[QUOTE=BlackSoul;19185753]oh so now i'm "clueless" bc i dont agree with your assessment of lomachenko? mane stop flexin' i KNOW boxing as much as a person who hasnt fought professionally but whom is an athlete and in very good shape i…

[QUOTE=Lomasexual;19183936]Holy hell, you really are clueless. Oh well, not everyone can know what they are talking about. Enjoy watching Bud's fights, he is definitely brilliant.[/QUOTE] oh so now i'm "clueless" bc i dont agree with your assessment of lomachenko? mane…

[QUOTE=BlackSoul;19181989]i very much sho KAAB(KNOW ALOT ABOUT BOXING) i also know that lomachenko came out of the olympics when he was 26 years old after two stints in the olympics he LOST a close fight to a fighter who had…

[QUOTE=Bronx23;19182225]dude totally unrelated but who's the guy with the hair lol keep seeing him everywhere[/QUOTE] Brendan Fraser