Russ Anber, a member of Oscar Rivas' corner and CEO of Rival Boxing, detailed the events that prompted to their team to file an appeal with the WBC, regarding the selection of gloves by Dillian Whyte.

There is already a mountain of controversy hanging over the fight.

As BoxingScene.com first broke on Wednesday, Whyte had tested positive for a banned substance on July 17, but UKAD and British Boxing Board of Control allowed the boxer to move forward with the bout. 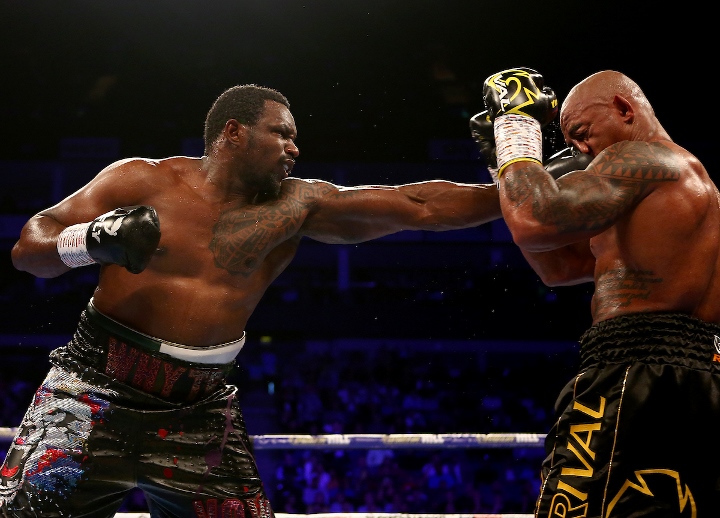 Anber explains that their appeal was filed before the contest took place on Saturday night, which saw Whyte win a twelve round unanimous decision to capture the WBC interim-heavyweight title.

"It was an exciting fight – no doubt about it. We knew it was going to be a tough fight for Oscar. Dillian has proved beyond a shadow of a doubt that he’s a world-class heavyweight," Anber stated.

"He’s come on in leaps and bounds and a lot of credit for that has to go to trainer Mark Tibbs for the work he’s done with him. On the night Dillian fought a very smart fight. He used his jab well and boxed the fight he needed to.

"I felt that Oscar did himself proud and fought one of the best fights of his career considering the level of opposition he was up against. I said to him after the fight it was probably the best performance of his career.

"He had Dillian hurt in the eighth and looked like he was on the verge of getting him out of there. Oscar himself was hurt in the second round after winning the first round and showed a lot of heart and determination throughout.

"So it was a good fight, but having said that here in the Rivas camp we weren’t happy with the job the referee did and with some other stuff that went on.

"We actually filed an official protest to the WBC prior to the fight because of some things that happened beforehand. Our protest was filed before the boxers even entered the ring so it's not a case of sour grapes because Oscar lost.

"It all goes back to the day before the fight when we had the rules meeting and glove selection meeting with the various officials and the British Boxing Board of Control.

"To be honest, I can't begin to express our disappointment with everything that happened.

"Well, our promoter Yvon Michel was in the room with us. What difference does it really make who’s physically carrying the gloves, the promoter or someone else to give to the promoter? That’s semantics!

"Anyway, we ended up not being allowed to submit these additional gloves. Thankfully, we didn’t end up needing them but it was an example of what was to come.

"On fight night, about a half hour before we were set to go into the ring, the Whyte camp suddenly told us they were not wearing the gloves that they selected at the glove selection meeting.

"Not the number one pair that they selected and not the number two pair either, but another brand of gloves that weren’t even on the table at the glove selection.

"Of course, we protested and said, ‘what was the point of having the glove selection meeting if you’re going to wear whatever you want?’ At that meeting Dillian’s representative Mark Tibbs had chosen the two sets of gloves and signed them off.

"No one said at the rules meeting, ‘oh by the way, if on the night you want to switch gloves you can.’

"To make matters worse, not only was Dillian allowed to wear these new gloves, but he was already gloved up and we weren’t even allowed to inspect them.

"Bear in mind, his camp inspected our gloves – they knew what we were wearing. In contrast we had no idea what they were using because they were allowed to pick whatever glove they wanted, tape it up and put it on.

"Even after we reluctantly agreed to let them make the change we still weren’t allowed to see the gloves.

"It's insane and created the impression that something was going on, that there was something being hidden.

"I mean, if those were the gloves they were going to use all along why not select them and bring them to the glove selection meeting?

If it was a late change for some reason that was needed on the night, why not allow us the courtesy of inspecting the gloves as you do at a glove selection meeting?

"We saw Dillian’s hands wrapped but not the gloves being put on. We couldn't examine the gloves and when we protested we were told ‘too bad’ by the Board officials – effectively they said they weren’t going to make him take his gloves off, they're on already, the fight’s about to start.

"Well, it takes 90 seconds at most to put on or take off a pair of gloves. So why not allow us the courtesy of being able to see the gloves?

"All that happened was everything ended up being shrouded in controversy and didn’t look transparent.

"We filed our protest before we even went into the ring. And can you blame us? I mean, can you imagine if the boot was on the other foot – and such a situation occurred, say, for a British fighter fighting an American in America? For Callum Smith or for Anthony Joshua? There would have been hell to pay and rightfully so.

"When Vasiliy Lomachenko – whose corner I was working - fought Anthony Crolla earlier this year, Joe Gallagher made sure that Lomachenko’s gloves were weighed by the California Athletic Commission.

"And he was right to do so, he was allowed and entitled to do that.  I say that as someone who was working for the opposing fighter.

"Quite simply, we should have been allowed to weigh the gloves and inspect the gloves.

"Our complaint isn't against Dillian and his camp – I understand when you go into a fight your camp does everything it can to give your man the edge, that’s part of the gamesmanship of boxing.

"But that’s why the commissions are there – to ensure there is transparency and fairness and to protect both fighters, not only one. Board chairman Robert Smith is a very fair man, I’ve never had any issues with him, but he wasn’t at the fight on Saturday.

"Another thing we weren’t happy with was that the referee was all over Rivas the whole fight. Every little infraction he was told: ‘don’t do this or don’t do that’, whereas if Dillian did something it passed. All the borderline stuff was called for Rivas, but not for Dillian.

"I’ve spent most of my years in boxing on the road – hell, my fighter Otis Grant, who I took from the amateurs to the world title, was known as a road warrior and had to beat Ryan Rhodes in Sheffield to win the WBO title.

"So I know the score; no one travels wanting any special favours, you just want a level playing field – but time and time again you see situations all over the world where the rules are applied differently for the home fighter and the away fighter or for the ‘A side’ as opposed to the ‘B side’. We saw it recently with Gennady Golovkin and Steve Rolls in New York.

"It’s not right and unless someone speaks out about it nothing will change."

[QUOTE=TonyGe;19983143]Of course they would already know because at that point Whyte's would have called Russ Anber down to the dressing room and showed him the gloves so he could inspect them before the fight.[/QUOTE] Rivas’s team actually had deposited a…

[QUOTE=TonyGe;19946899]Actually I went and read the UKAD rules after I posted that. The promptor can't tell the opposing camp because the failed athlete's name is to be kept private pending a review. UKAD cleared Whyte to fight. There is another…

[QUOTE=Roberto Vasquez;19936147]Whyte already said in post fight press conference someone took his gloves before the fight. If Rivas + his coach had bothered to turn up to it they would already know. The drug cheat issue is the main thing…

Hearns and co are being exposed in the light as the dirty slimey habitually lying snake con man we knew he’s always been! Those with common sense always knew, those who never had it are the ones who are surprised…

MY be one legit corrupt fight posted here. Close decisions and crybaby fans that have absolutely nothing to complain about in fights like Ward vs Kessler? Sour sour sour that is unbelievable you even mentioned that fight.