Stevenson: I Wanna F--k Marriaga Up, Show Different Part Of My Game

The unbeaten WBO featherweight champion is anxious to make “a statement” when they fight for his 126-pound championship at Madison Square Garden’s Hulu Theater. The 22-year-old Stevenson (13-0, 7 KOs) has gone the distance in two of his past three fights, but he wants to become the first fighter to truly knock out Colombia’s Marriaga (29-3, 25 KOs) in a main event ESPN will televise.

Vasiliy Lomachenko scored a technical-knockout victory over Marriaga in August 2017. That stoppage in their WBO 130-pound championship match was the result of Marriaga declining to leave his corner for the start of the eighth round in a scheduled 12-rounder at Microsoft Theater in Los Angeles. 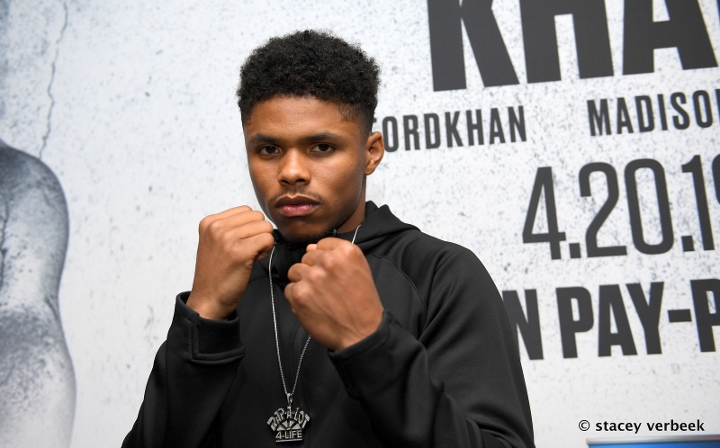 Stevenson knows to become “a star” he’ll have to start knocking out opponents.

Stevenson, a southpaw from Newark, New Jersey, soundly defeated Joet Gonzalez in their 12-round fight for the then-vacant WBO featherweight title October 26 in Reno, Nevada. Judges Eric Cheek, Glenn Feldman and Dave Moretti each scored that fight 119-109 for Stevenson, who won 11 rounds apiece on their cards.

“I wasn’t disappointed, because I know Gonzalez is a tough fighter,” Stevenson said. “His game plan was for me to stand there, and if I would’ve stood there a little bit too long, he’d have been able to show how good he was. I didn’t do that.”

The 2016 Olympic silver medalist senses Marriaga will be easier to take out than Gonzalez (23-1, 14 KOs).

“I think they’ve got different styles,” Stevenson said. “I think Joet, he’s throwing six-punch and seven-punch combinations. Marriaga’s throwing two, three big, hard shots. He’s not throwing [combinations], so I think I can capitalize off that, stand there and f*ck him up.”

Talk in the ring.

Marriaga is a good fighter. If Shakur beats him up, something Walters and Loma couldn’t, I’m impressed.

[QUOTE=DumpkinsPlus5;20459085]Interesting that you would use that phrase towards Stevenson.[/QUOTE] What’s so interesting about it?

[QUOTE=Squ□redCircle34;20459062]Stevenson gonna beat Marriaga [B]like he Smacked his woman on the àśś[/B]! Lol Either clear cut Unanimous decision or ref stoppage, hope he wins and we get Warrington-Stevenson next![/QUOTE] Interesting that you would use that phrase towards Stevenson.

If he does beat Marriaga the way he says he will, it'll be his most impressive when thus far. [QUOTE=archiemoore1;20459057][B]Shakur is a young man who shouldn't take anymore **** than anyone else just because he's a boxer.[/B] And you aren't…