The signs are pretty obvious.

The lack of speed.

Boxing doesn’t do subtlety very well, so when a fighter is past their physical prime and on the decline, it’s about as glaring as a hot sunny day.

Especially if that boxer was once a knockout artist who mechanically destroyed his opponents.

Which brings us to the 37-year-old Gennadiy Golovkin.

Trying to figure out if Gennadiy Golovkin is a diminished product has been a parlor game since he ate a few too many punches against Kell Brook in 2016.

But he looked uncommonly vulnerable in spots, the shine coming off the veneer a bit.

He then struggled at times against Daniel Jacobs, winning a decision but taking more punishment than we’re used to seeing. He didn’t get off like he used to, the combinations not as crisp. Suddenly Golovkin was human.

Was he getting old? Or just fighting better opposition? Or both?

And are we being too tough on Golovkin?

In criticizing Golovkin for looking slightly vulnerable against the top tier, are we holding him to an impossible standard because of how dominant he was early on in his career? When he knocked out 23 straight opponents? 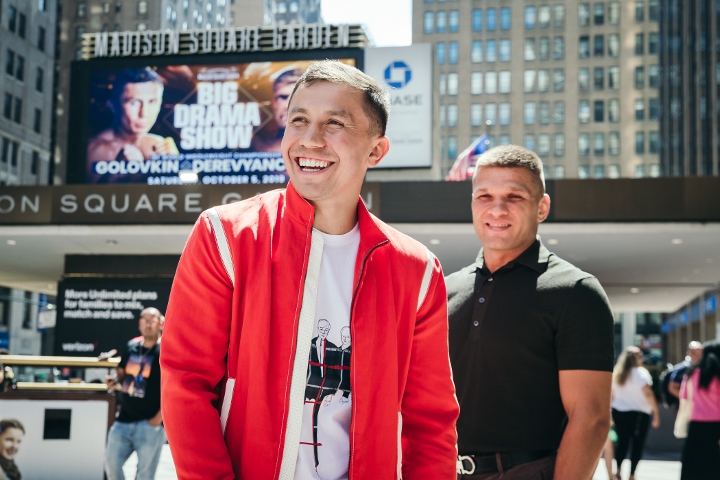 When Golovkin faces Sergiy Derevyanchenko on Saturday at Madison Square Garden for the vacant IBF middleweight title, the Golovkin-watchers will be out en masse, watching, judging.

They will have another chance to determine whether Golovkin is still among the best — of if he has taken another dramatic step backward and has slipped. The bout will be shown on the streaming service DAZN.

The matchup has been framed by his backers as a chance for Golovkin to reestablish himself in the middleweight division and to separate himself from Canelo Alvarez, after he spent most of 2017 and 2018 consumed with Canelo in two controversial bouts.

But his fight on Saturday will also give viewers a chance to evaluate Golovkin against a different opponent from Canelo, someone who will be good enough to either expose Golovkin as even further removed from his prime, or as a fighter who is just as formidable as he once was and is still among the best.

To listen to Golovkin describe his mental and physical state heading into the fight is to listen to someone who is always supremely confident in his own abilities. Golovkin doesn’t do passive or timid.

“I feel great, I feel like champion,” he said on a recent conference call to hype Saturday’s bout. “Every fight for me is like a championship fight. The same exactly, I feel the same. The same level.”

Along with judging Golovkin, we’ll also get to see how Golovkin has meshed with new trainer Johnathan Banks, who didn’t have long to prepare Golovkin against Steve Rolls in June when GGG knocked him out in four rounds.

Golovkin showed more head movement against the unheralded Rolls. But he also continued the recent trend of getting hit with clean shots. Rolls popped his head back repeatedly before Golovkin’s relentless attack wore him down, his punches raining down on his head like falling debris. Derevyanchenko’s style should play into Golovkin’s hands, since he’s not necessarily a mover and Golovkin won’t have to look hard to find him.

“We tried a lot of different things,” Golovkin said of his work with Banks. “The more time we have, the more we can try.”

The normally stoic Golovkin grew a little frustrated while addressing reporters before Thursday’s press conference at having to answer more questions on Canelo and whether a third fight will happen. Canelo has said there won’t be a trilogy. Golovkin didn’t want to talk about it.

“You asking about Canelo tells something about you as journalists,” Golovkin said, trying to land a KO before he entered the ring. “Explore better options. Ask more interesting questions. I think it’s your problem, not mine.”

“Canelo just looks like he didn't want to box with me or couldn't box with me so the only choice he had (was) to go to a fight with Kovalev,” he said. “The only thing that I see he must have had some sort of problems because this was the option that he was given to fight me and for some reason he didn't. It means that he did this on purpose to not fight me. He moved on to Kovalev.”

Golovkin was stripped of the IBF title last year when he opted not to make a mandatory defense against the Brooklyn-based Ukrainian Derevyanchenko (13-1, 10 knockouts), deciding instead to pursue a rematch with Alvarez. Golovkin showed glimpses of the unstoppable figure he was earlier in his career in those two fights with Canelo. His toughness and heart and chin will never be questioned. But he also looked slower and absorbed a bevy of heavy shots. He looked outclassed at times fighting against one of the sport’s best. Then he would come alive and press the advantage, displaying his greatness.

Now, he’s come full circle and will get a chance to win the belt back. He’ll also get a chance to quash any lingering talk that he’s slipped and no longer among the elite, show us all that he’s still one of the most feared men alive. Big drama show for sure.

He was robbed twice aagainst Canelo yet keeps ko his opponents.Canelo Lost both times against GGG he never was a stylist always was a Brawler.

I don’t know if GGG is slower or not, but his performance against high level fighters like Canelo, Jacobs, and Brook are probably not the best judge. Canelo and Jacobs are top level, A list fighters. He beat Jacobs and…

I think its a points loss for Golovkin, maybe a kd, but hoping that i'm wrong

[QUOTE=Marvlus Marv;20102575]I predict he'll get even faster. 3G might start doing the Ali shuffle and could even put the old shoe-shine on Derev... [B]NOT[/B]. GGG is slowass now. Never was the fastest of hands and basically the dude's on the…

I predict he'll get even faster. 3G might start doing the Ali shuffle and could even put the old shoe-shine on Derev... [B]NOT[/B]. GGG is slowass now. Never was the fastest of hands and basically the dude's on the slide…