Showtime’s tripleheader Saturday night from Barclays Center in Brooklyn aired mostly at the same time as an HBO “Boxing After Dark” tripleheader from The Forum in Inglewood, California. The peak viewership for HBO’s broadcast was 421,000 during its second fight – a 12-round draw between Filipino super flyweights Donnie Nietes (41-1-5, 23 KOs) and Aston Palicte (24-2-1, 20 KOs). 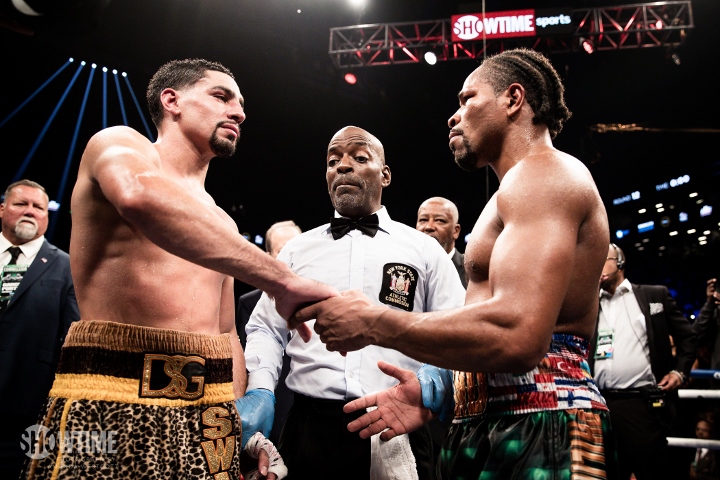 The 30-year-old Porter edged Garcia in a highly competitive, entertaining encounter to become a two-time welterweight champion. Porter (29-2-1, 17 KOs), a Las Vegas resident raised in Akron, Ohio, boxed from the outside more than usual, took Garcia’s hardest punches well and beat Garcia on the scorecards of all three judges – Don Ackerman (116-112), Julie Lederman (115-113) and Eric Marlinski (115-113).

Porter won the WBC welterweight championship Keith Thurman gave up late in April because a hand injury delayed his return from elbow surgery.

Philadelphia’s Garcia, also 30, lost for just the second time as a pro (35-2, 20 KOs). The former WBA/WBC 140-pound champion also failed in his bid to regain the WBC welterweight crown he lost to Thurman by split decision in their 12-round welterweight title unification fight 18 months ago at Barclays Center.

The bout broadcast before Porter-Garcia, a comparatively boring welterweight fight in which Cuba’s Yordenis Ugas out-pointed Argentina’s Cesar Barrionuevo, was watched by a peak audience of 510,000 and an average audience of 447,000. Ugas (23-3, 11 KOs) became the mandatory challenger for Porter by beating Barrionuevo (34-4-2, 24 KOs, 1 NC) in that 12-round WBC elimination match.

The opener of Showtime’s tripleheader Saturday, an action-packed, 10-round heavyweight brawl between Adam Kownacki and Charles Martin, drew a peak viewership of 503,000 and an average audience of 395,000. Brooklyn’s Kownacki (18-0, 14 KOs) beat St. Louis’ Martin (25-2-1, 23 KOs) by unanimous decision in a fan-friendly fight in which both boxers demonstrated grit and durability.

[QUOTE=slu;19089994]Never going to do a big number on Showtime, Saturday night opposite college football. Terrible numbers even adding in streaming. Steven for all his talk needs to kick this platform in the a$$, he's got great fights and no one…

fight wasn't promoted great though, there's not enough promo for these fights no more stateside

Terrible numbers for such a supposed high profile fight.

HBO did a study a few years back and they determined there were 700 thousand hard core fans in the US. I I always thought this to be true. The number's proved it! We had a family gathering Sat night.…