Shawn Porter Expects To Fight The Winner of Spence-Garcia

As far as former two-time welterweight world titlist Shawn Porter knows, his next fight will be a rematch as well as a chance to kick off a third title reign.

Porter told BoxingScene.com that he has been told by adviser and Premier Boxing Champions chief Al Haymon that he will get a shot at the winner of the much-anticipated fight between two-belt world titleholder Errol Spence Jr. and former welterweight and junior welterweight titlist Danny Garcia.

Spence and Garcia and scheduled to square off on in the main event of a Fox Sports PPV card on Nov. 21 at a venue to be determined.

“I think the conversation remains the same (with Haymon),” Porter said. “The conversation is me fighting the winner of Errol Spence Jr. and Danny Garcia. I don’t think that’s something Al Haymon is looking to change and or looking forward to changing. That’s what I’m being told, that I get the winner.” 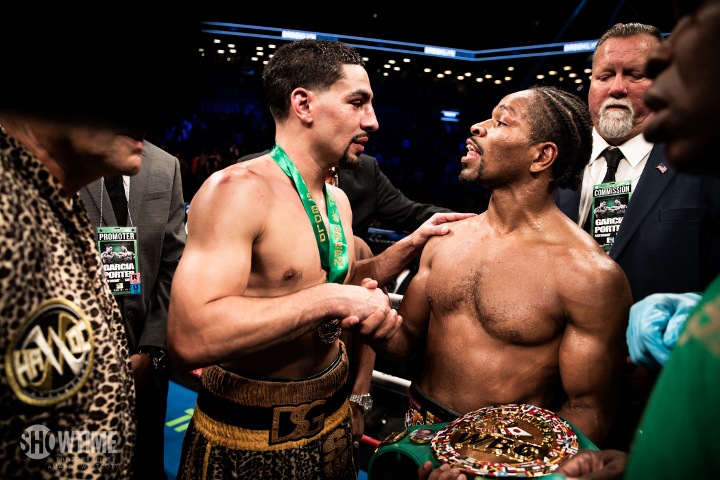 After one defense, a split decision victory over Yordenis Ugas in March 2019, Porter lost the belt to Spence in a title unification fight last September that headlined a Fox PPV card at the Staples Center in Los Angeles in what was one of the most action-packed fights of 2019.

Spence (26-0, 21 KOs), 30, of DeSoto, Texas, and Porter battled on mostly even terms with the biggest moment of the fight coming when Spence knocked Porter down in the 11th round. Spence wound up winning 116-111 on two scorecards and Porter won 115-112 on the third scorecard.

Porter bounced back from the loss when he cruised to a shutout 12-round decision win over then-undefeated Sebastian Formella, of Germany, on Aug. 22 at the Microsoft Theater in Los Angeles in the main event of a PBC on Fox card.

The win put Porter in prime position in yet another sanctioning organization.

“I think the only addition to the conversation is the WBC now also has me ranked No. 1, which makes me No. 1 in (two) of the four sanctioning bodies, which isn’t bad,” Porter said. “I think that’s amazing. I never saw that coming.”

“I’m supposed to be the mandatory for the WBC and the IBF,” Porter said, although the winner of the vacant IBF interim title bout between Sergey Lipinets and Kudratillo Abdukakhorov, scheduled for Oct. 10 at the Mohegan Sun resort in Uncasville, Connecticut, will be ahead of him in terms of the next mandated IBF welterweight title bout.

“For me, you can’t go wrong either way,” Porter said. “I can fight either guy, Errol Spence or Danny Garcia, and it’s a big fight. So I am definitely going to be in the front row (on Nov. 21) watching intently.”

As for how he thinks the fight will go, he is all in for Spence.

“This is not a knockout win for Errol Spence. I can see Danny Garcia pulling off some rounds, but I think it will be a unanimous decision for Errol Spence,” Porter said. “I think he’s in good enough health to get back in the ring (following a car accident last October). I think it’s Errol Spence’s fight.”

[QUOTE=Mister Wolf;20760368]Pretty much. Only difference is he won't be waiting around broke like alot of his peers.[/QUOTE] Hahaha, yes, good point! Thanks.

Of course he has been told he would get the winner. Like i said before, PBC aren't in the business of working with others, unless it would benefit them like when Wilder first cherrypicked an unfit Fury.

[QUOTE=Mister Wolf;20762726]He has done enough to where Porter will turn down a mandatory WBO title shot to wait for Errol Spence to throw some crumbs his way. You think he would be turning down that WBO if it was Jeff…

[QUOTE=champion4ever;20762687]When boxing networks and platforms become an impediment it cheats the fans of the fights that we want to see.[/QUOTE] Well I can't say nothing about that, your absolutely correct.