Roach: Miguel Cotto Has A lot Left, I Peed Blood After Body Shots

According to Hall of Fame trainer Freddie Roach, his veteran fighter Miguel Cotto (40-5, 33 KOs) has a lot left in the tank.

On February 25th, Cotto will return for the first time since a twelve round decision loss to Canelo Alvarez in November 2015, when he faces James “Mandingo Warrior” Kirkland (32-2, 28 KOs) at Ford Center at The Star in Frisco, Texas. There is a catch-weight in place of 153-pounds.

Dubbed as “The Return”, their twelve round junior middleweight contest will be produced and distributed live by HBO Pay-Per-View. 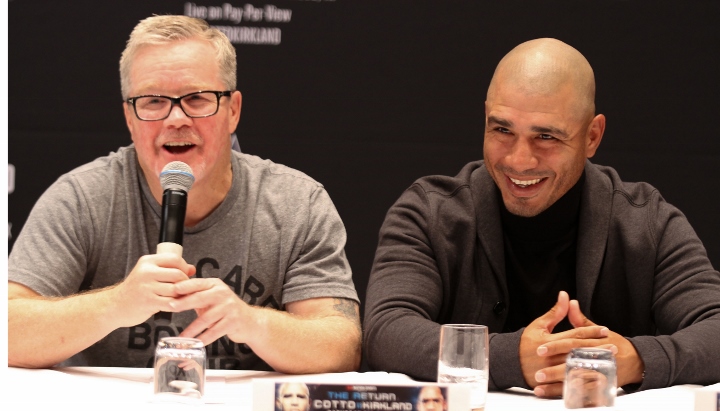 Cotto considers 2017 as his final year in the sport. The training camp with Roach is underway and Cotto entered the gym in top shape as he usually keeps his body close to fighting form.

“If Miguel Cotto didn’t have a lot left, I wouldn’t be here. He’s great in the gym, he’s always in shape and he keeps himself close to weight, all the time. He’s tremendous. He works hard. If he didn’t look great in the gym, I wouldn’t let him fight. I care that much about him. He will be 100% ready for this fight and if he’s not 100% for this fight, it won’t happen," Roach said.

There is no decline in Cotto's power. Roach revealed that the former four division world champion has already battered him with shots to the body.

"Right now we have a tough fight in front of us. And we’re getting ready for that fight. I did send my guys out a couple of times to work with Miguel in Puerto Rico just to keep him fresh. Miguel in just the past two days has been great. We dusted off the body bag. Body punches are hard. Yes, I peed blood last night. It’s good to be back to work and I am happy to have him back in the gym,” Rocah said.

Soo! Margarito had him ****ting blood out of his nose and mouth! And yes before all of MC's fans begin the loaded gloves BS! Prove it! Or shut up! Not even MC cries as much as u guys do!

[QUOTE=BOXING-SCRIBE;17336691]He didn't really train for Trout..he was about to retire before that fight..there was a lot "dont give a ****s" on his behalf for the Trout fight.[/QUOTE] theres always excuses when cotto loses lol

not being funny but your a frail old man with some serious health issues. Im not a boxer but if i was cracking an old man like him to the ribs he'd feel it, guys not far off needing to…

Can't be doing him much good if this is true. Good win over Martinez despite him being injured, but the middleweight but not middleweight stint didn't make Cotto look good in my opinion.