Tellez, who is originally from Queretaro, Mexico and now lives and trains in San Diego, California, broke down Acosta during each round. Tellez was the aggressor and the accumulation of punches he landed bruised Acosta’s face and drew blood from the nose. 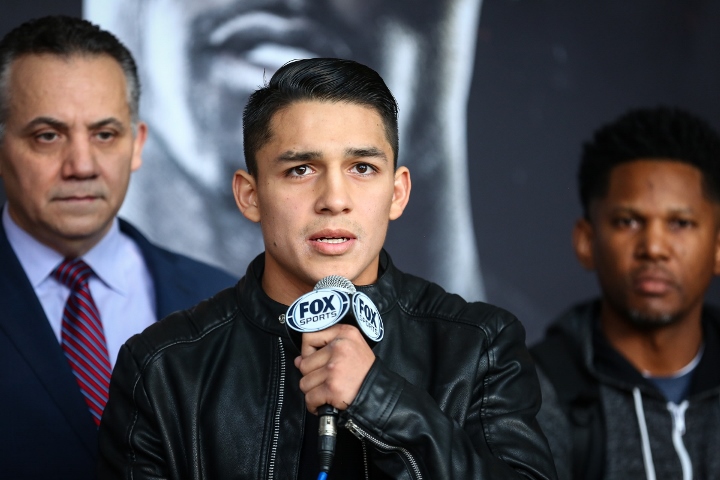 Midway through round 7, Tellez back Acosta against the ropes, landing a left-right combination that dropped him to the canvas, prompting an immediate stoppage by the referee.

Tellez had not fought since December 21, knocking out 2016 U.S. Olympian and previously-unbeaten Karlos Balderas. The victory took place six months after suffering his only loss as a pro at the hands of unbeaten lightweight prospect Michel Rivera of the Dominican Republic.

Manager Frank Espinoza was impressed with Tellez’s performance and believes he can make significant noise at either 130 or 135 pounds.

“Rene fought well, but I give credit to (Acosta) as well,” Espinoza told BoxingScene over the phone Sunday evening. “He took a lot of punches and I thought the fight was going to end during the second or third rounds. He was bloodied and possibly had a broken nose, but he came to fight despite the devastating left-right combination to the head that ended the fight.

“I saw the Balderas fight and he impressed me. He does need technical work, but you can’t replace power. He’s only 21, so he has youth on his side. He could take a good punch. I really think I found a ‘diamond in the rough’ with him. He resembles someone I used to manage in (former world titleholder) Israel Vazquez. I believe this kid can be a world champion in 2-3 years. He has that valiant, warrior spirit.”

Tellez is currently not signed to a promoter. Espinoza wants to keep Tellez as active as possible, including a return to the ring in January, whether in the United States or Mexico.

Espinoza also credits trainer Carlos Barragan for the amount of time he has invested in Tellez. Barragan has trained the likes of former world junior welterweight title challenger Antonio Orozco, who is also managed by Espinoza.

Despite the amount of work Tellez has put in the gym during the COVID-19 pandemic, Espinoza believes Barragan’s influence outside of the ring has also played an important role.

“Rene is in the developmental stage, but I’ve been a strong believer in how you take care of yourself out of the ring is also important. Carlos has been a great influence thus far. He’s instilled more discipline on Rene, especially what he eats. Rene realizes he can’t always eat tacos. Carlos has brought that tough love to Rene.”

I want to see more of Tellez. He was impressive when he smashed Balderas.