Pulev: I Hope Povetkin Wins, Whyte Talks So Much Bullsh-t!

Pulev and Povetkin were at one time promotional stablemates under Sauerland Event. Both fighters eventually left Sauerland and went in different promotional directions.

Pulev does not like the extreme talkative nature of Whyte - who is no stranger to taking verbal shots at just about anyone and everyone. 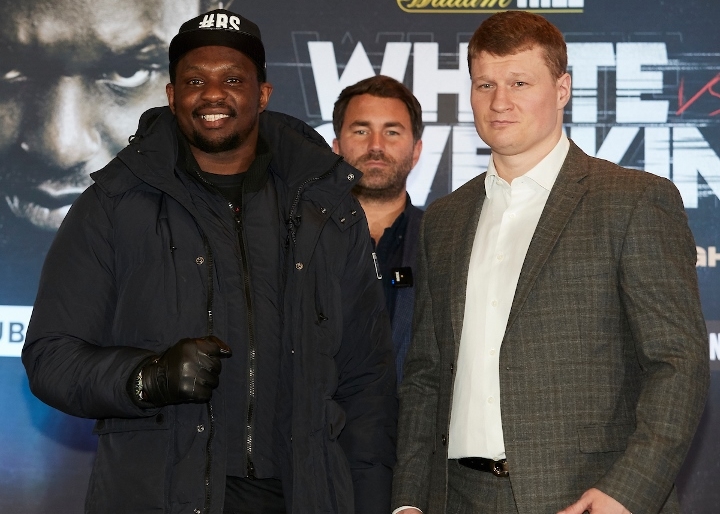 While he views the contest as a 50-50 proposition, Pulev wants Povetkin, an Olympic gold medal winner and a former WBA champion, to get his hand raised at the end of the night.

Whyte is staking his mandatory status under the WBC.

"It is a very interesting fight, they are both very good boxers. Povektin was a very good amateur. We know professional boxing is different and we know Whyte is a 100 percent professional boxer. I’m 50-50 but I hope Povetkin wins because I know him personally and he’s a really good man who does not talk too much," Pulev told Betway Insider.

"On the other hand, Dillian Whyte talks so much bullsh-t. He is always twisting things up and talking bullsh-t; talking talking, talking too much. I don’t like this."

Pulev is lined up for his mandatory fight with WBA, IBF, IBO, WBO world champion Anthony Joshua. The fight is being targeted for the month of December.

If Whyte is victorious next Saturday night, then Pulev would be eager to face him - provided that the Bulgarian fighter defeats Joshua.

[QUOTE=Monzon99;20703330]Pulev is a moron. Whyte has been dodged and ducked out of his mandatory shot for two years, he has every right to bark and talk for the blatant injustices he has suffered because wilder fury haymon finkel warren are…

The most memorable moment in Pulev`s career was being stopped by Wlad. In nice fashion.

You and me both, Pulev.

It's not that Whyte talks a lot or whatever, he just lacks charisma. Btchin 24/7 is tiresome and he doesn't really have another side to him.

You fought Rydell Booker in your last fight and wasn’t impressive so as if you could or should beat Anthony Joshua is talkin sh_t as well. Go sit your old a_s down! I like all the young talent I’m seeing…