Povetkin vs. Whyte Rematch Targeted For November 21 or 28

A rematch between Alexander Povetkin and Dillian Whyte looks set to go ahead in late November after their first fight returned good pay-per-view returns, although it is far from clear where the fight will take place.

Povetkin twice got off the floor to knock Whyte out with a stunning left uppercut to claim his interim WBC heavyweight title on the final night of Eddie Hearn’s Fight Camp last month.

There was a rematch clause in the fight contract, so a return was always likely, although with a backlog of big heavyweight fights – including Anthony Joshua v Kubrat Pulev and Oleksandr Usyk v Dereck Chisora – plus uncertainty surrounding the return of live crowds due to the coronavirus pandemic, it seemed unlikely that there would be room in the diary this year. 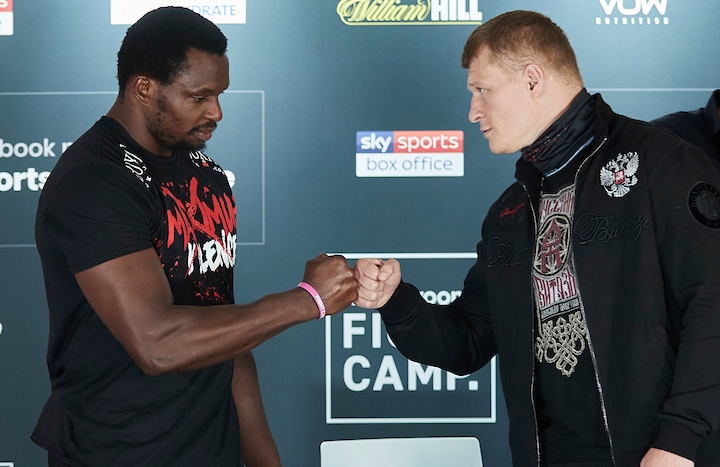 However, emboldened by better than expected pay-per-view figures from the first fight, the rematch looks set to go ahead on November 21 or 28, with Joshua-Pulev already scheduled for December 12.

Sky, who screened Whyte-Povetkin on their Sky Box Office platform, never release official viewing figures, but it is understood that far from being a flop, the August 22 card, which also featured the Katie Taylor-Delfine Persoon rematch, performed very well.

Whyte has already travelled back to his training base in Portugal to begin preparations for the fight.

One thing that is not clear is where the fight will take place. There are still hopes that some sort of audience will be allowed the attend fights in November in the UK, but with tighter social-distancing rules coming into force in the UK this week, to reduce the risk of s second wave.

It is understood that Hearn has cancelled plans to stage any Matchroom shows in the UK in September. A fight featuring Joshua Buatsi, the unbeaten light-heavyweight, is expected to headline Matchoom’s next UK show, which is now pencilled in for October 3.

Hearn is understood to be against putting shows on in a television studio, as rival promoters have done, while any thoughts of continuing Fight Camp in the back garden of the Matchroom headquarters in Brentwood, Essex, have also been ruled out.

He does however favour putting the Buatsi fight forward as a potential Government test event, to trial how boxing could run with limited live crowds and social distancing. So far test events have gone ahead or are planned in football, cricket, rugby, horse racing, snooker, basketball and speedway.

I enjoyed the fight, so I wouldn't mind watching it again.

[QUOTE=_Rexy_;20761755]Does the UK not have medical suspensions after someone gets KTFO?[/QUOTE] It’s common around the world for a suspension for 60 days - this is more than 60 days isn’t it ?