It’s been nearly a week since the few in attendance ringside at the final Fight Camp event of the summer were left in a stunned silence.

Everyone knew Povetkin was not a gimmie for Whyte.

The challenger said he was still ambitious and that he still wanted a world title fight, even as he approached 41 (Povetkin turns 41 on September 2).

That remains the case. He’d like a fight with Fury but understands his contractual obligations mean a rematch with Whyte will come first, possibly before the end of the year.

“This has been an option in the contract since the beginning so we just have to do it,” Povetkin told BoxingScene.com of the Whyte return. “I want to focus on the fight that I have but of course I’m looking forward to fighting Tyson Fury – who is the top heavyweight now – but at the same time I need to be focused on the rematch.”

Whyte sounds unflinchingly confident about his chances in a return. He asked promoter Eddie Hearn straight away, as he regrouped in the aftermath of the second loss of his career, if they could get Povetkin back. Hearn said they would.

Whyte must think that he had the fight for the taking to be so assured of overturning the result next time.

“I don’t know,” said Povetkin, when asked what made Whyte so confident about the second fight. “We will have a rematch for sure. I’m not sure he will win it, but we will see why [he’s so confident] in the rematch.” 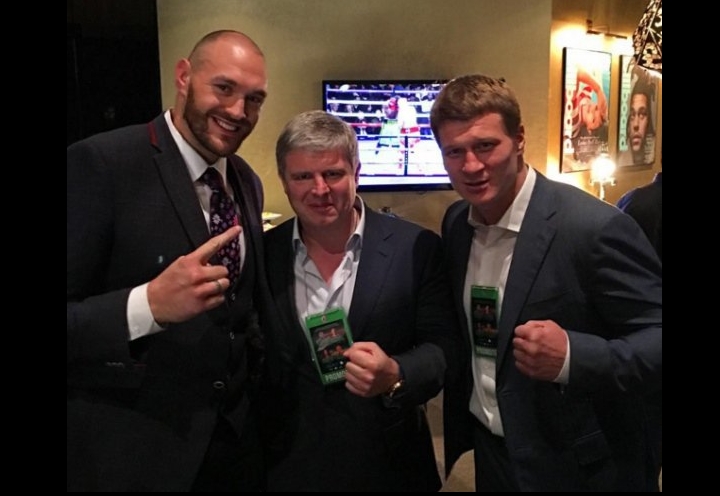 While Whyte’s supporters will lament his descent down the pecking order, fight fans will be pleased enough that they get to see Povetkin-Whyte again. It was a thriller. Povetkin was down twice in round four but rallied to win in dramatic fashion in the fifth.

“You know, I was pushed about a little inside and I was getting hit with punches that weren’t really necessary, that’s what people saw before the knockout,” admitted Povetkin. “It wasn’t too dramatic, there wasn’t too much damage,” he added of the adversity he faced in the fourth. “They were like flash knockdowns, I wasn’t as hurt as it might have looked or you might have seen, maybe it motivated me to be more focused coming out for round five. “We also have to take into account that Dillian is a great boxer, we have to say that.”

Some have chastised the winning blow as a ‘lucky punch.’ Others think it was a scholarly shot, one born out of years of preparation.

“You know, we were doing that in training,” explained Povetkin. “It wasn’t a lucky punch. At the same time, it was automatic, it was my instincts. Something like that was in my mind all the time. [When it landed] I realised that he was not getting up [straight away], that he was finished.”

So he wasn’t in trouble in the fourth?

“Well, there was a problem in round four but it was okay for me and I just went forward after that,’ he smiled.

While the WBC doesn’t officially recognise rematch clauses, Povetkin is contractually obliged and is not looking for a different route. He’s happy to face Whyte again.

‘He was at the level I expected, there was nothing above my expectations, he was as I expected,” continued the Russian, who seems to be aging well and has lost to only Wladimr Klitschko and Anthony Joshua in 39 fights (along with a draw against Michael Hunter).

“I feel very good myself, even at my age. We will see.”

There was a calm confidence with Povetkin in the bubble. All week he impressed people with his easy demeanour and politeness.

“I always behave myself in this way, respectfully, so there was no issue about the bubble or other issues you might have before other fights,” he said. “I’m like that all the time.”

To top it off, his return to Russia went viral online when he was greeted by a band, with music and singing. He was dressed in a cloak and hat and heralded as a hero.

“I can tell you that it’s Russian tradition for athletes coming back but it was very nice,” he went on. “I didn’t expect it but it was a nice meeting at the airport.”

He opted not to join in (“I would love to do that but I can’t. It’s not to my advantage!”) but appreciated the gesture.

Povetkin may have got things wrong in his career before now but he is ready to give the fans fireworks again – with Whyte. Many said styles would blend for a thriller and the Russian agrees.

“If people are interested in seeing it 10 times, let’s do it,” he said.