Last Saturday night at Matchroom's Fight Camp in Brentwood, Povetkin was behind on points and went down twice in the fourth, but he landed a spectacular uppercut in the fifth to knock Whyte out cold.

Povetkin was joined by his promoter, World of Boxing CEO Andrey Ryabinsky. 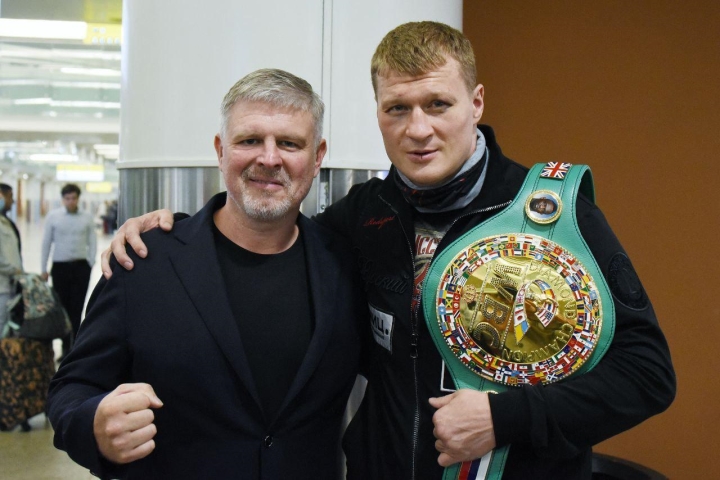 Next week, Povetkin will turn 41-years-old.

Whyte was the mandatory challenger to WBC heavyweight champion Tyson Fury. The unexpected loss has removed him from that slot.

The Olympic gold medal winner is heading straight forward to a rematch with Whyte, who is exercising an immediate rematch clause for a year-end showdown.

The WBC have yet to decide if the Whyte-Povetkin rematch winner will be in line for a world title shot.

“It was perhaps the best shot of my career. I haven’t watched the fight back, haven’t seen it," Povetkin said, according to Danny Armstrong. "We worked on that shot in training. People can think what they want whether it was a lucky punch or not. There’s that many experts in boxing that I already don’t know what to say about it all!

“Right now I have a rematch, I’m not thinking about [who I will face next]. What can I say about [Tyson] Fury? He’s a strong, skilled boxer, maybe not as technical as [Anthony] Joshua, but I can’t say anything bad about him."

Ryabinsky rejected any talk that his boxer's landed a "lucky punch."

“If he hadn’t work on it in training, then it was a lucky punch. But he did, so there was nothing lucky about it,” Ryabinsky said.

“The rematch clause is common in such fights. It was written in the contract. If we agreed, it means we have a reason - because we wanted the rematch. Initially, the WBC ruled the fight would determine a number one contender between these two, so the rules of the game have changed a little. We don’t know yet [if the winner will get a title shot], we’ll sort that out, we’ll see.

“Why did we want the rematch clause? Because first and foremost, we need to look after the interests of our boxer. For Povetkin, he has the chance to earn decent money out of the current situation and if we have a chance to do that for our boxer, of course we will do that. Being the number one contender is never easy. It could last for a year or even two. Fighting now is also a must. That’s the case in a few words. The matter is a lot deeper and a lot more complicated but that’s our position.”

Fans write off Povetkin all the time. Yet he's been in many thrilling fights, and the only time he didn't enter the ring prepared was the Huck matchup. That was definitely no lucky punch. Whyte was lucky his head wasn't…

GFOH that was pure luck .

How many people on this forum have cried about ‘Hearns BS rematch clauses’, well Povetkin and his manager wanted one. :bottle: [QUOTE] Ryabinsky rejected any talk that his boxer's landed a "lucky punch." “If he hadn’t work on it in…

No luck whatsoever, he dipped, slid and threw right where he was supposed to with power. It landed well and good night. Definitely no luck involved.

The beauty of that shot was that it was the furthest thing from lucky. It was executed after 4 rounds of setting it up and after taking punishment in the process. The fact it was done with such sudden and…