Bryant Jennings and Oscar Rivas top the first ESPN+ boxing telecast of 2019, as they meet in a pivotal 12-round heavyweight bout Friday evening at Turning Stone Resort & Casino in Verona, New York.

The pair of aspiring heavyweight contenders both came in fighting fit at Thursday’s weigh-in ahead of their crossroads bout. Jennings (24-2, 14KOs) tipped the scales at a trim and ready 225.25 pounds, while Canada’s Rivas (25-0, 17KOs) weighed in at 234 pounds. 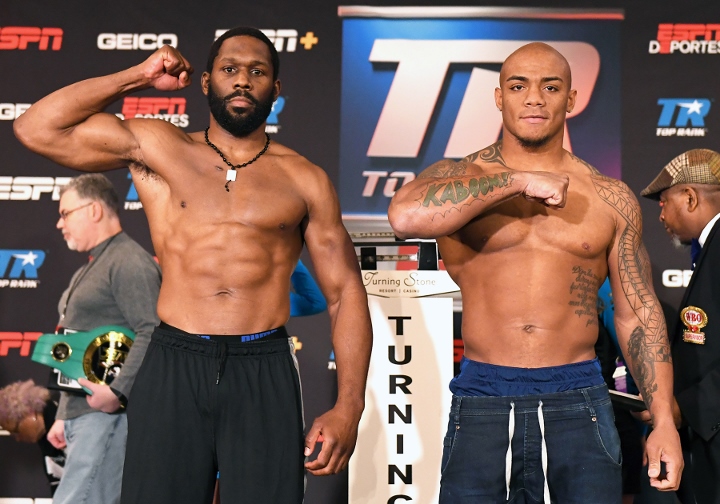 Philadelphia’s Jennings enters the contest riding a five-fight win streak, all coming since returning to the ring in Aug. ’17 upon his signing with Top Rank. The move was preceded by a 20-month ring hiatus following back-to-back losses to then-World heavyweight champion Wladimir Klitschko in Apr. ’15 and then-unbeaten Luis Ortiz later that December. 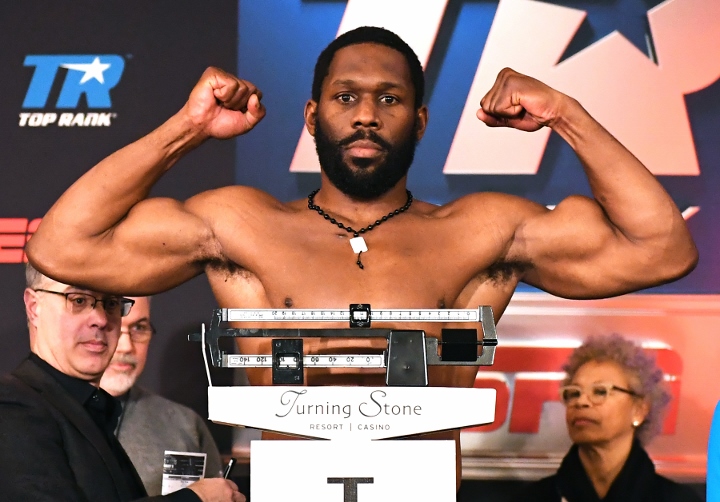 The 7th round knockout loss to Ortiz also took place at Turning Stone, with Friday’s bout marking his first fight back at the scene of the crime. He enters the bout having rallied to drop and stop Alexander Dimitrenko in the 9th round of their back-and-forth thriller last August in Atlantic City. 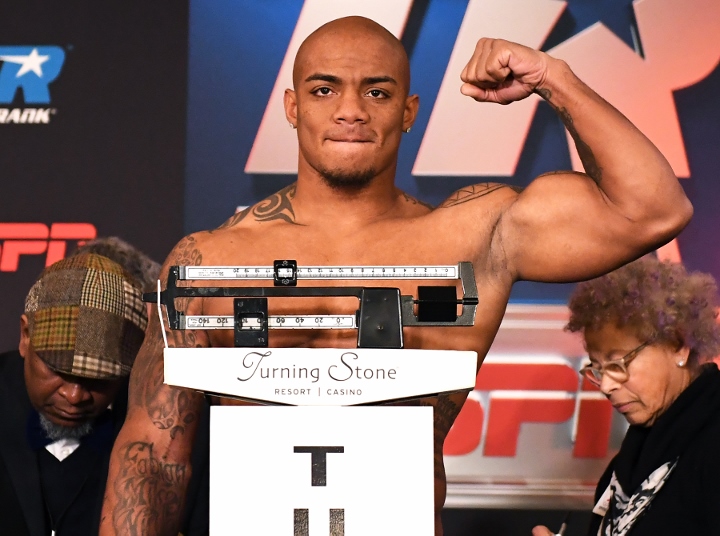 While Rivas comes in as an undefeated contender, he’s also riding a five-fight win streak of sorts.  The 31-year old boxer—who represented his native Colombia in the 2008 Beijing Olympics—overcame a rough 2016 which saw a scheduled bout with then-unbeaten prospect Gerald Washington fall by the wayside due to an old medical issue which prompted the California State Athletic Commission to deny him a license at the time. 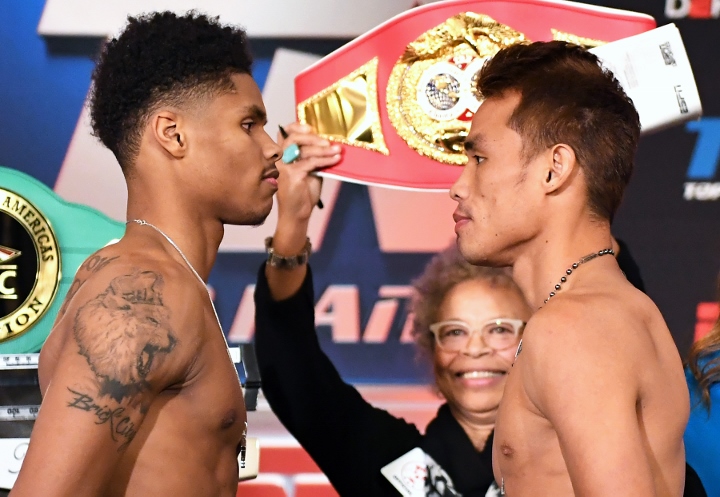 As a result, Rivas’ 2016 ring campaign was limited to a pair of club fights. He hasn’t necessarily seen a significant spike in competition, but has enjoyed a steady stream of ring activity following a 14-month break, scoring five wins since returning for good in Sept. ’17. 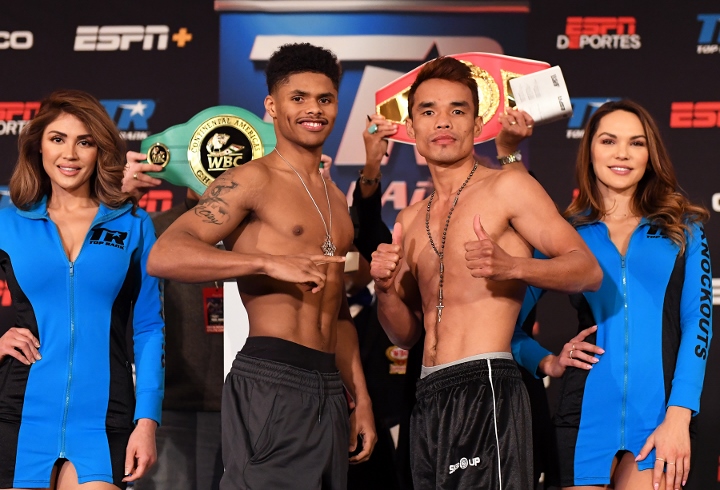 Friday’s bout will mark just his second in the United States, the lone other such occasion coming in a June ’15 1st round knockout of Jason Pettaway in Shelton, Washington. 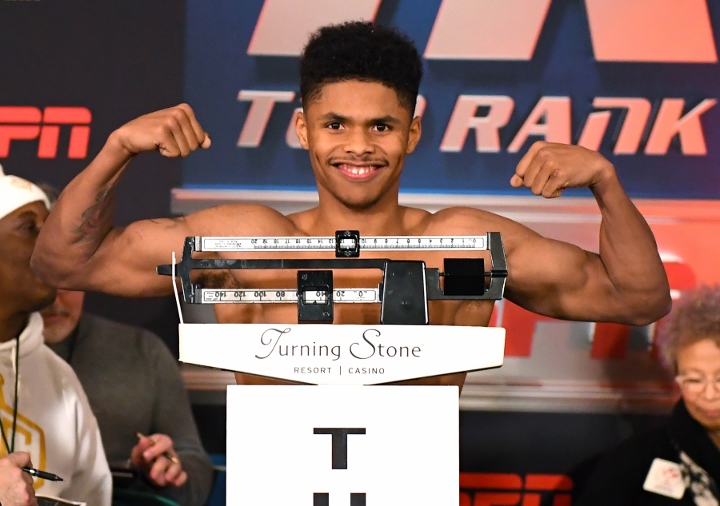 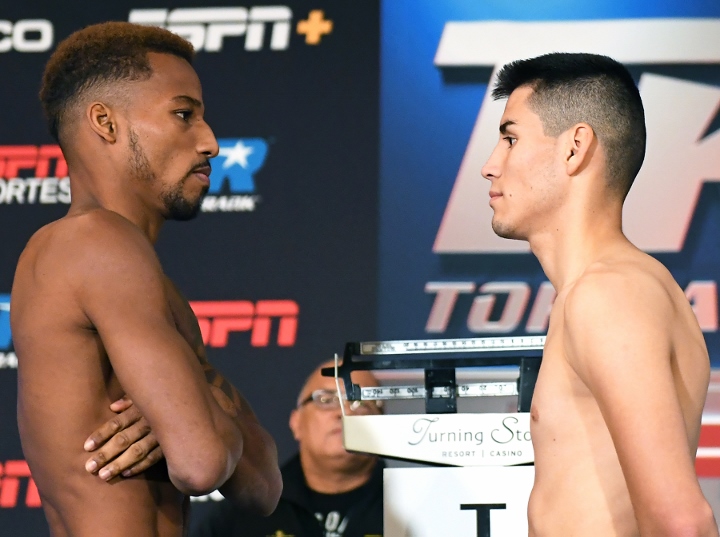 Stevenson weighed 125.5 pounds for his first fight since a highlight-reel 1st round knockout of Viorel Simion last October on ESPN. The 21-year old southpaw from Newark, New Jersey is among the top prospects while still three months shy of two full years in the pro ranks. 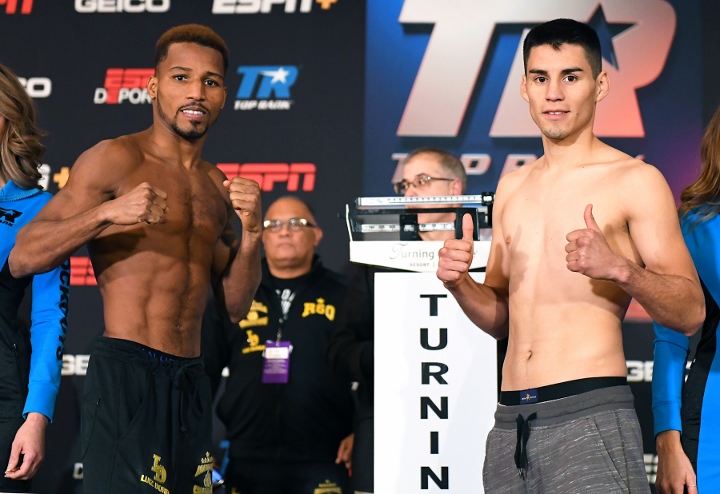 Rosales (22-1-1, 10KOs) weighed 124.25 pounds for his first fight in the United States. The 27-year old is coming off of a 2nd round knockout of Ibrahim Balla last March in Australia, helping move past a knockout loss to former two-division titlist Jhonny Gonzalez eight months prior. 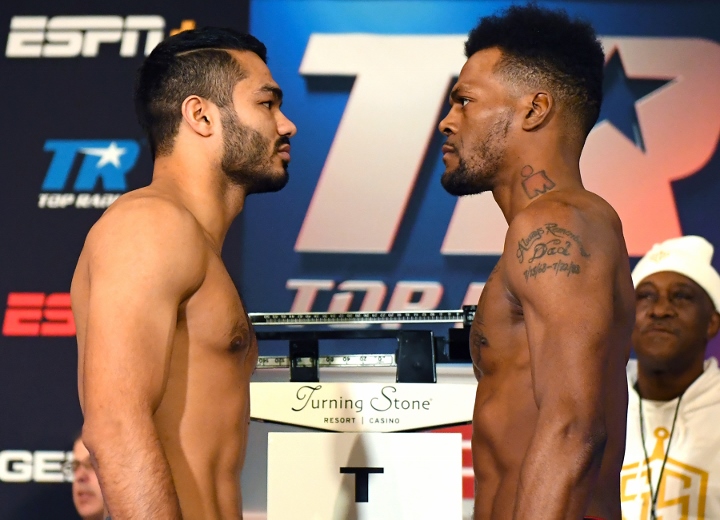 On the preliminary portion of the live stream, Vikas Krishan will make his celebrated pro debut in a four-round bout versus Steven Andrade, who weighed 151.75 pounds. 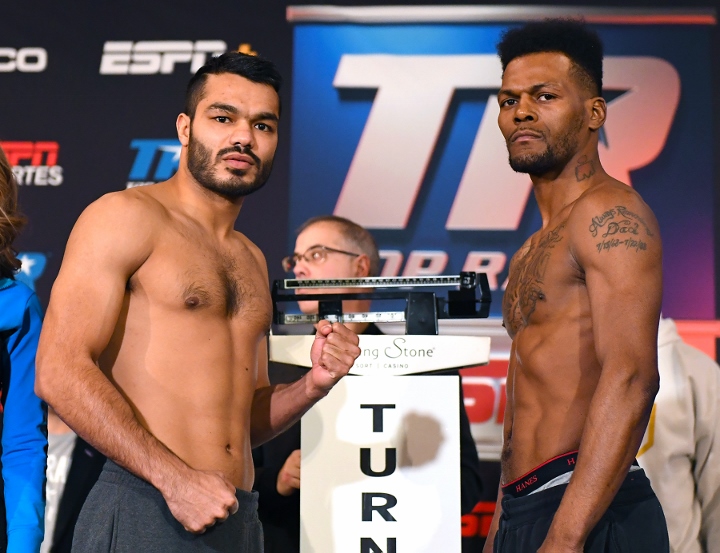 Krishan—who weighed 152 pounds for the occasion—fought in the 2012 London and 2016 Rio Olympics for his native India, where he is considered the country’s greatest amateur boxer of all time. 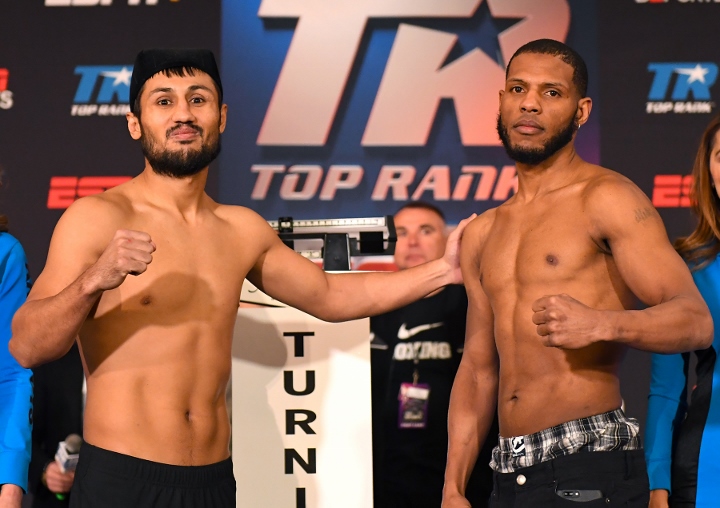 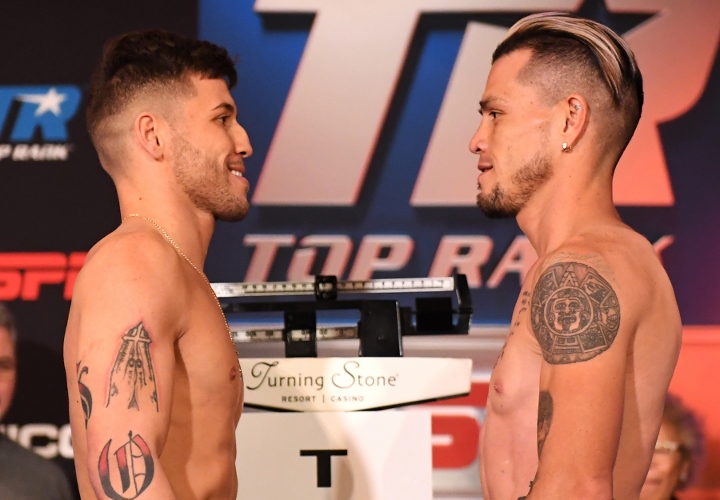 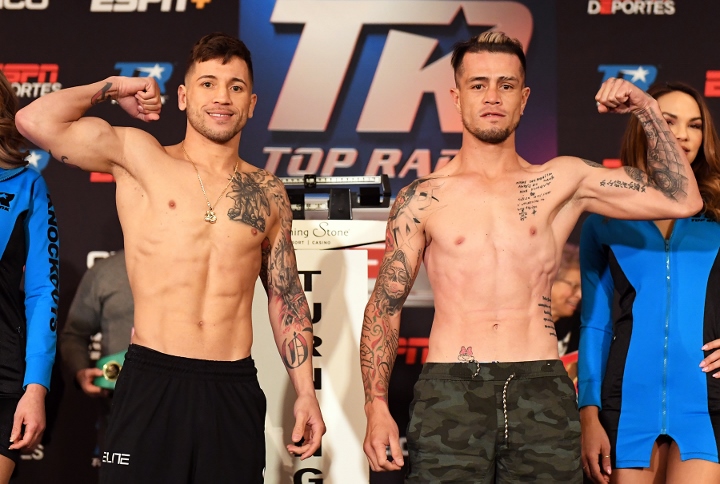 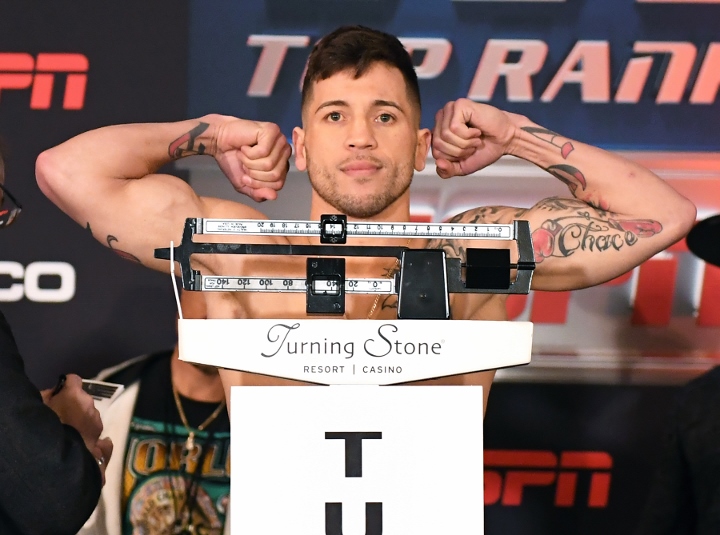 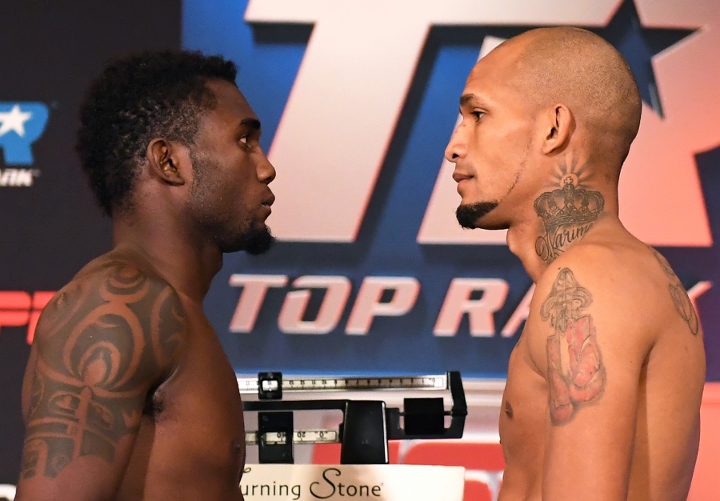 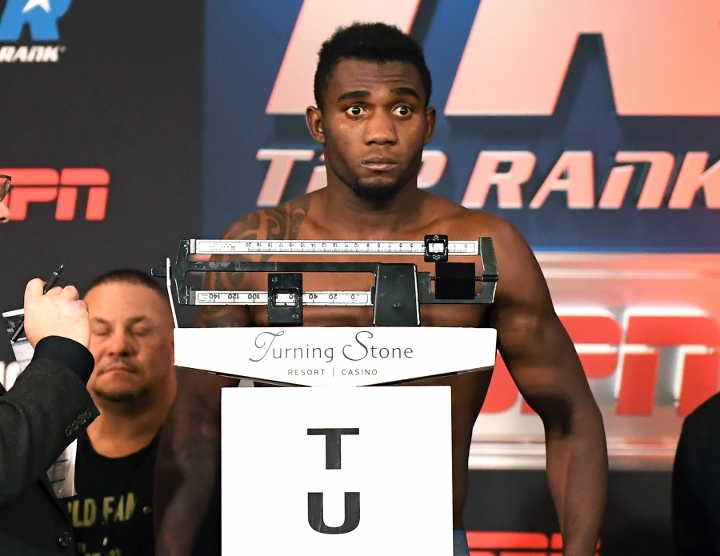