Pacquiao: Right Now, I Have No Intention Of Running For President

NEW YORK – Manny Pacquiao’s demanding jobs as a senator in the Philippines’ and as a boxer keep him plenty busy.

The Filipino superstar thus has no plans, at least not now, to eventually run for president in his homeland. Pacquiao, who won a congressional election in May 2010, has been a senator in the Philippines since May 2016.

His senatorial duties are more time-consuming than his congressional gig. The five-division world champion couldn’t even imagine running for president while still an active boxer. 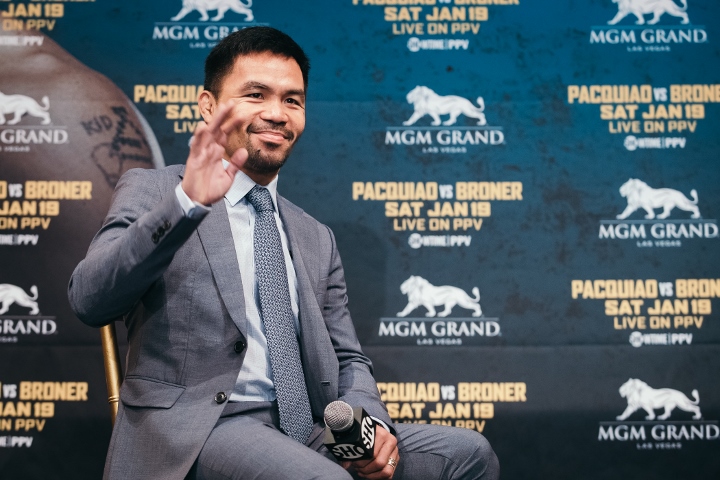 Pacquiao told a group of reporters prior to a press conference Monday in Manhattan that he has “no intention” of running for president.

“After [being a] senator, I don’t know,” said Pacquiao, whose senatorial term concludes at the end of June 2022. “Somebody says they want me to run as the president of the Republic of the Philippines. But it’s a great responsibility, big responsibility, and in my heart I have no intention – right now I have no intention to run as president of the Republic of the Philippines. I’m happy to be a senator of the Philippines and serving the people, and while serving the people, happy to continue my boxing career.”

Rodrigo Duterte, the 73-year-old president of the Philippines, has repeatedly stated that he wants Pacquiao to succeed him in office when his term ends at the conclusion of June 2022.

Pacquiao could secure a very lucrative rematch against Floyd Mayweather Jr. if he beats Broner (33-3-1, 24 KOs, 1 NC). Whatever happens after he boxes Broner, Pacquiao doesn’t want to retire.

“When I tried to stop boxing, I feel like lonely and sad because boxing is my passion,” Pacquiao said. “I’ve been in boxing since I was young and when I stopped boxing, I realized nobody like me [was] waving the flags of the Philippines, bringing honor to my country, to our country. I want myself to always be seen in a boxing ring like that. I really like boxing and, like I said, boxing is my passion.

“Right now, my intention is to continue my career as a boxer because I can. Of course, I have to feel it and see the condition of my body. And right now, thank God for giving me strength and good health, peace of mind and strength every day that I can continue my career.”

That's what Duterte's toy boy all said but did the opposite, it's no brainer if you vote for Pac. :sad6::feedback:

[QUOTE=Drew Bundini Br;19285491]Unfortunately PAC will be fighting to pay back taxes. They will make sure they match him soft like they did with CLOTTEY,ALGIERI,RIOS,MATYSEE and lazy head case BRONER.[/QUOTE] i thought he was gonna get arrested the moment he steps…

[QUOTE=.WesternChamp.;19285485]this guy and any other filipino fighters right now will never reach the status of the pacman. never!!! just like how guys like broner will never be on the same level as floyd![/QUOTE]I know he's not on Manny's level (and…

Unfortunately PAC will be fighting to pay back taxes. They will make sure they match him soft like they did with CLOTTEY,ALGIERI,RIOS,MATYSEE and lazy head case BRONER.