Pablo Cesar Cano To Impose Will on Aging Jorge Linares

Cano (31-7-1, 21 KOs) meets the aging Linares (45-4, 28 KOs) in support of a main event featuring southpaw Demetrius Andrade in defense of his WBO middleweight crown against Artur Akavov distributed through DAZN in the Hulu Theater of Madison Square Garden in New York.

A victory over Linares could earn “The Wrecker’s” first title shot since September 2011, when a 21-year-old Cano lost his junior welterweight debut and initial shot by 10th-round stoppage to Mexican legend Erik Morales. 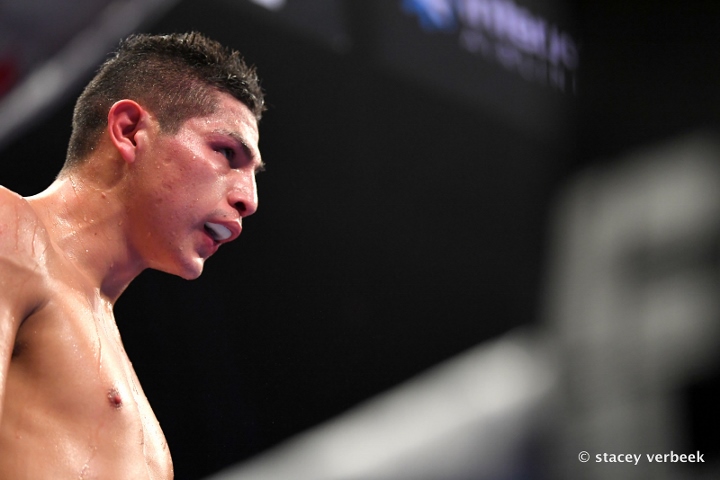 Cano rebounded from Morales to win his next three fights, two by stoppage, including a seventh round technical decision over previously unbeaten Johan Perez (July 2012) for the WBA’s interim 140-pound title.

Although just 5-4 with one knockout in his past nine fights, “The Wrecker's’” energized by September’s fifth-round technical decision over previously unbeaten Ruslan Madiev (12-1, 5 KOs).

“I’m motivated with desire and enthusiasm,” said the 29-year-old Cano, of Mexico, owner of split-decisions over title challenger Ashley Theophane (September 2013) and former champion Mauricio Herrera (November 2016). “I’m going to take advantage of my experience from my previous fights. I think it will serve me well against Linares, and I’ll walk away with a victory.”

After the Perez fight, Cano rose to 147 for consecutive split- and unanimous decision losses to world champions Paulie Malignaggi (October 2012) and Shane Mosley (May 2013), the former in a failed bdt to earn a WBC crown despite flooring Malignaggi in the 11th round.

“I think this is an even fight. He has a lot of qualities and I have mine as well,” said Cano. “One advantage he has is that he has quicker hands, but that my advantage is that I’m at my natural weight.”

For Linares, the setback was his first since back-to-back TKO losses to Sergio Thompson (March 2012) and southpaw Antonio DeMarco (October 2011) in the second and 11th rounds.

Linares’ was also dropped twice and stopped in 73 seconds by Juan Carlos Salgado (October 2009), who floored him twice to dethrone him as WBA 130-pound champion.

Cano believes his size will translate into enough power to produce the knockout against Linares, whose losses have all ended in that manner.

“I’m going to go out there, mark my territory, make sure he knows how strong I am by imposing my will, and, overall, work the body,” said Cano. “By doing that, I do believe that a knockout can happen, but either way, I’m confident of leaving the ring with a victory.”

[QUOTE=robbyheartbaby;19436289]I know right what's with the ageing mantra lol. Cano must be the oldest 29 year old in the sport with some of the worst scar tissue around his eyes I have ever seen. I expect him to get cut…

Impose his will on an aging Jorge Linares...seriously? Good luck with that.

Lem Satterfield must not like Linares. He called him old at 33. Cano's corner stops fight in the 8th.

[QUOTE=Realizniguhnit;19435554]Stupid article stressing "age". Cano is 29 and Linares turned 33 back in August. They are basically in the same age group with Linares only being older by 4 years[/QUOTE] I know right what's with the ageing mantra lol. Cano…