Oscar Valdez's victory on Saturday night against the much heavier Scott Quigg came at quite a price for the defending WBO featherweight champion.

Quigg weighed in last Friday at 2.8-pounds over the featherweight limit. A deal was reached for the contest to move forward, but it was evident that Valdez suffered an injury the contest, as he was bleeding heavily from his mouth.

Following his unanimous decision win, he was taken immediately from the Carson's StubHub Center to a local hospital to examine what may have been a broken jaw. 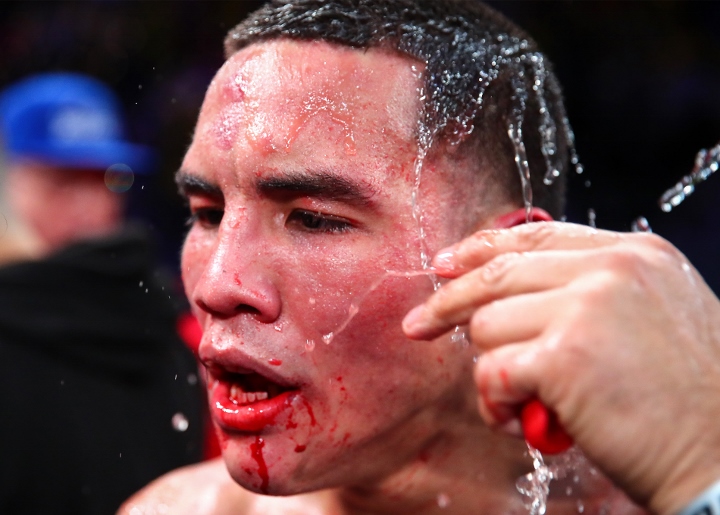 Valdez has spent the past couple of days in various hospitals where the process began to fix his damaged jaw.

His manager, Frank Espinoza, told BoxingScene.com on Monday afternoon - "It went well, it was not a surgery, it was a medical procedure and they wired his jaw. It'll be anywhere from five-to-six weeks and he should come out of it. Everything went well."

For now, the focus will be solely on Valdez's recovery.

"Right now he just needs to rest and we're not even thinking about his next fight," said Espinoza. "I just want him to get better. We're just going to follow the doctors orders, whatever he says."

Valdez fought Quigg despite his opponent not coming close to making the 126-pound limit, refusing to do a day-off weigh-in with a hydration clause and Quigg coming in above the junior welterweight limit at just over 142 pounds on fight night. It ended up being a physically taxing fight.

But Espinoza says of his fighter - "he's in great spirits. He's very thankful for the fans, the well-wishes, he really appreciates it. So he's really excited about that. He wants to thank the fans for all the support and says,'stay tuned.'"

I hope Valdez heals and then takes a nice vacation in Hawaii or somewhere and just relaxes for a while. Take some time off from boxing to enjoy some things. Total respect for this warrior.

Damn, I don't really like the language they are using. "We just hope he gets better, we'll do what ever the doctor says" I hope it was traslation. but it almost sounds like guilt

Valdez is definitely 1 of my favorite boxers right now.