A heavyweight encounter that was shelved due to the pandemic caused by coronavirus is back on the front burner.

Matchroom Boxing head Eddie Hearn has revealed that a showdown between Oleksandr Usyk and Derek Chisora is on track to take place on Halloween.

“I had a phone call tonight from Alex Krassyuk [managing director of K2 Promotions-Ukraine], who’s the co-promoter of Oleksandr Usyk saying, ‘Any news? We’re ready to go,’” Hearn told Sky Sports. “They’re the phone calls we’re getting quite a lot at the moment, and the pressure mounts on us to come up with [the fight against Dereck Chisora]. Dereck is training really hard. October 31st is the date we have penciled in for that fight, but it’s dependent on the current deal driving people through the doors and having some kind of gate or moving it internationally and having a site fee.” 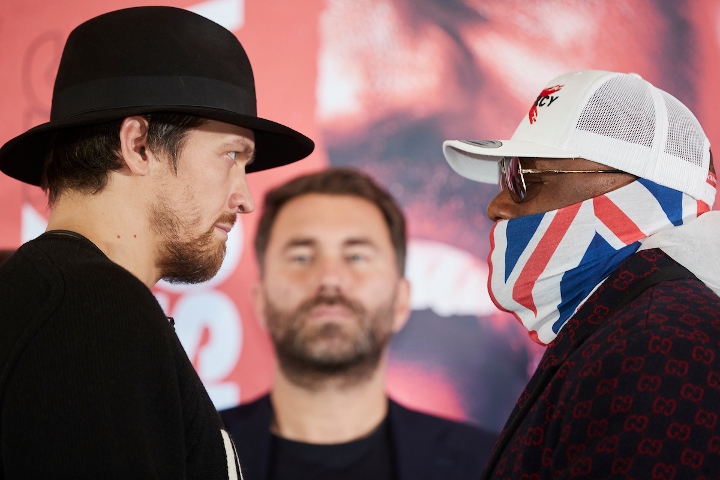 The fight will be just the second in the heavyweight division for Usyk, a 2012 Olympics gold medal winner and a former unified and undisputed cruiserweight champion.

The southpaw Usyk made his heavyweight debut last October with a stoppage win against Chazz Witherspoon in Chicago.

The 36-year-old Chisora finished last year with a 3-0 record with wins against Senad Gashi in April, Artur Szplila in July and David Price in October.

“Again, [Usyk vs. Chisora] is a really important fight. When this thing started, I had three main names and that was to deliver Whyte-Povetkin, Usyk-Chisora, and Joshua against Pulev,” said Hearn. “And to make sure the other stable could have the opportunities, keep moving forward and progressing their careers.”

[QUOTE=LDBC Slayer;20739954]Chisora CAN knock Usyk out Will he? Probably not, but if it happens it won't even be the biggest upset in the last couple of years.[/QUOTE] Well then.. I guess anybody can knock anybody out.. because this is boxing,…

[QUOTE=Kannabis Kid;20728912]This is why I don't count Whyte out just yet if there is still big fights for Dereck Chisora when he has almost double digit losses there will still be fights for Dillian Whyte neither will ever be world…

I think Usyk wins , but I won`t be surprised if Chisora stops him. Chisora is experienced heavyweight, he was in many wars. Usyk only fought 1 journeyman at that weight.

[QUOTE=steeve steel;20730593]Comparing Chisora to Povetkin is criminal...almost as much as comparing Whyte to Usyk.[/QUOTE] Chisora CAN knock Usyk out Will he? Probably not, but if it happens it won't even be the biggest upset in the last couple of years.

I think a decisive win for Usyk would be a solid indicator that hes capable of hanging with the elite. Remember Whyte had two long, close fights with Chisora and hes supposedly a top 5 guy. I have a weird…