Off the Ropes: Ron Lyle Story Stands On Its Own

Often, the way the greatest athletes are covered and written about can seem to absorb an entire era into the tapestry of their personal story.

It’s never really the case. The gravitational pull of stars means more readers, more viewers, more clicks, but ultimately it doesn’t erase that each of the individuals who shared their time, who played the role of foil or rival, was a story all their own.

In boxing, no figure so subsumes their moment in time quite like Muhammad Ali. The dominant figure of the sport in the 1970s and 80s remained for many the face of the sport decades after his retirement. There is a library of books about Ali and his era. Those that focus on Ali have an easy centerpiece.

The trick for the rest of them is to try and tell stories where Ali doesn’t overwhelm the narrative. Author Candace Toft pulled it off in her 2010 biography of 1970s heavyweight contender Ron Lyle, Off the Ropes. Re-released in wide US distribution last October, Toft delivers a fascinating look at a life as complicated outside the ring as it was violent inside. 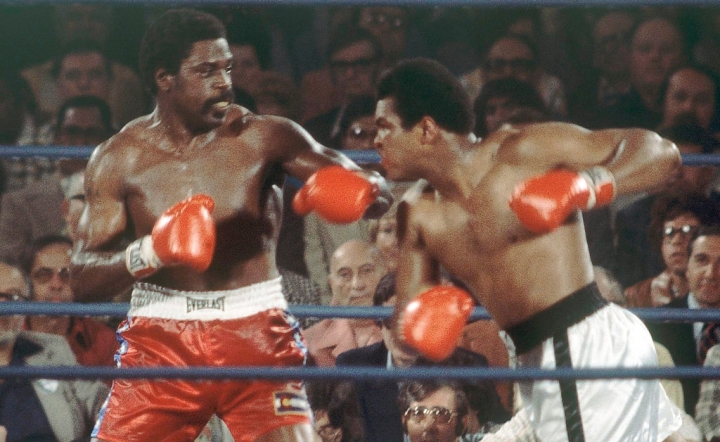 Toft relates the early years of Lyle’s life as the prodigal son in a family of 19 children. Part of a deeply religious family, Lyle found trouble and eventually a murder charge that landed him in prison. Toft used her access to the late Lyle, who died in 2011, to help narrate and humanize how he found opportunity through athletics, and ultimately boxing, as a prisoner.

Boxing has often been the most cinematic sport. It plays equally to film noir seediness and Alger mythologizing, to the idea that a man can be vindicated, redeemed, elevated with the violence of his own two hands. One of the reasons it does is so much of the reality of boxing isn’t far off the storytelling.

Ron Lyle without boxing is just another convict. A prison assault that nearly killed him could have left him with no more to be remembered by. With boxing, he opened up an avenue for an early exit. His relationships with prison guard Clifford Maddox and businessman Bill Daniels were a big part of his road to the outside world as he built a reputation on the prison fight circuit. Toft weaves the importance of these relationships into the early chapters.

Lyle, even with the opportunity boxing provided, was still an unlikely contender. He spent a few years in the amateur ranks before turning professional already 30 years old. A big, athletic puncher, the heart of the book focuses on a professional career dotted with some of the biggest names of boxing’s biggest heavyweight era.

Toft recounts Lyle describing a dream he had about fighting for the heavyweight championship of the world. In the dream, Lyle didn’t get to find out how the fight ended. Here, the reader will but the fights it took to get there, and the fights that came immediately after, provide a vision of a dream fulfilled. His first loss to Jerry Quarry could have sidetracked him but he kept going. A loss to Jimmy Young may have helped him to get Ali in his next fight.

While Ali figures into the story in the form of negotiations and attempts to goad the champion into the fight, and Lyle’s interactions with trainer Angelo Dundee figure in as early as his time in prison, Toft never lets the more famous figure erase the centerpiece of the book.

The sixth chapter is the one the most ardent fight fans are likely to enjoy most. In those pages, we see Lyle’s battles with Ali, Ernie Shavers, and George Foreman through his mind’s eye. Two were nationally televised; Shavers is an easy piece of film to find on YouTube. All were memorable encounters, the Foreman fight in particular etching Lyle in history even in defeat. He may never have won the title, but he will always be one half of what many consider the greatest heavyweight brawl of all time.

Along with the fights, we get the story of Lyle’s struggles in marriage and fatherhood and those carried on after he hung up his gloves. Lyle’s assortment of odd jobs over the years is highlighted by a tale best not totally spoiled.

Needless to say, if you’re working with someone who took great heavyweights to the edge, and they tell you to stop mouthing off, it’s probably best to be quiet.

Lyle ultimately had one last dream, to run his own youth boxing club, and Toft gets the reader there in a way that gives this true story the happy ending one would want in fiction.

For readers who haven’t caught this one yet, it’s a quick read and well worth the time. No star does it alone. It takes a rare collection of fighters to fill out a great era. Ron Lyle was part of a rare collection.

Foreman/ Lyle is a absolute f.ucking war one of the best fights ever

Hi Cliff, I just read your story on Ron Lyle---what a nice man. I was also training a couple of boxers around the time Ron Lyle was at Nevada Partners gym with Richard Steele.I would get there early in the…

I had a brief but outstanding moment at Richard Steals gym in Vegas several years back and Richard was also the nicest guy. We would take photos in his office where he had pictures of himself and every notable figure…