Bellew, who returns to the cruiserweight ranks, challenges Usyk for his IBF, WBA, WBC and WBO belts at the Manchester Arena on Saturday, live on Sky Sports Box Office.

Usyk comes back from his dominating win over Murat Gassiev in the World Boxing Super Series finals. 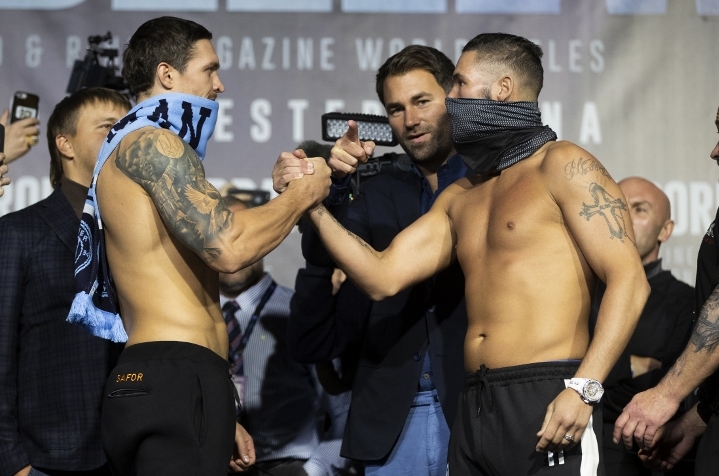 And Bellew drops back in weight, to a division where he captured the WBC world title, after rising up to heavyweight to win back to back fights over David Haye by knockout.

The odds are so far apart, that Nelson would consider a Bellew victory as the biggest upset ever in British boxing history.

"Your heart tells you 'come on Tony, you can do this'. Then you meet the monster, it's going to be like David and Goliath," said Nelson to Sky Sports.

"Usyk is a dangerous, dangerous individual. If Tony Bellew pulls this off, as far as I'm concerned, that is the biggest upset a British fighter has caused in boxing. This man Usyk is supposed to be the best fighter out there and I actually believe it."

According to Nelson, Bellew has the possibility of winning if Usyk became overconfident with the wide odds and views the Liverpool fighter as an easy victory.

"Tony Bellew has got to hope that this man is arrogant enough to underestimate him, to think he's not good enough," Nelson said.

"If he does that then he might take chances and be a little lackadaisical. Then he'll walk onto one. I'm scared. This guy is so cool, he's so confident, he's so intelligent. I sat there and thought 'I cannot find the chink anywhere in you'.

"You can tell when someone talks, how their hands are, how their body language is. This guy oozes confidence. I asked him why he chose Tony Bellew and he said 'Because I could'. It's not even arrogance. This kid just knows he's good but now he realises that he's brilliant."

[QUOTE=Szef;19262018]Well if Bellew pulls this off it would mean Usyk wasn't that special, sorry. Usyk has only had 15 pro fights. He's done more than 99.9% of other things fighters who've had only 15 fights but still, beating him isn't…

[QUOTE=ShamrockXpress;19261975]Respective points in there careers. Fury was an unknown quantity stepping up to fight an ATG who had been in steady decline for a while. Look at the jennings fight for evidence. Bellew is someome who won a vacant title,…

[QUOTE=Szef;19261942]It wouldn't even be the biggest upset by a Brit boxer of the past 5 years imo - Klitschko/Fury was a bigger and more significant upset than Bellew beating Usyk would be.[/QUOTE] Respective points in there careers. Fury was an…

It wouldn't even be the biggest upset by a Brit boxer of the past 5 years imo - Klitschko/Fury was a bigger and more significant upset than Bellew beating Usyk would be.

[QUOTE=NachoMan;19261707]Ok, Bellew KO6 Usyk then.[/QUOTE] Haha great response. I like both these guys. I’m not really a fan of any one boxer but these guys are pretty close.