“It has been a great experience fighting for our first world title and there will be more to come.”

Three and a half years ago Jazza Dickens (28-3, 11 KOs) suffered a broken jaw against Cuban maestro Guillermo Rigondeaux when the pair met for Rigo’s WBA Super Bantamweight title in Wales.

It was a fight that ended in the second round due to the injury caused by a sharp left hand from Rigondeaux ending the Brit’s fairytale before it got going. Losses to Kid Galahad in 2013 and Thomas Ward in 2017 have come in Dickens biggest fights to date but the 28-year-old is loving his career right now and is confident that there is more to come thanks to his number three ranking with the IBF and his place in the MTK Golden Contract semi-finals on Friday night.

Boxing Scene caught up with Dickens earlier this month during his preparations for his next fight. His enthusiasm for his career and life in general was clear to hear over the phone.

“It’s just amazing. I absolutely love it. I love it now even still. I love everything about it. I’ve still got the passion for it,” he said looking back at his nine years as a professional.

“People say why don’t you coach, do some personal training with people there’s good money in it, but no. My candle’s not burned out yet. If my candle does burn out I can burn another one. That being the other side of boxing; managing, promoting, coaching or what have you but for now my candle is still burning bright.

“It’s getting better and better for me. I enjoy being up there fighting for titles and that’s where we wanted to be. It took so long. Not just them years as a professional but all those years as a kid getting to this level and now that I’m here what am I supposed to do, swallow it and say f--k this I don’t want it? This is where I always wanted to be. I’m living my childhood now. I sacrificed so much to be where I’m at now and I’m doing it.” 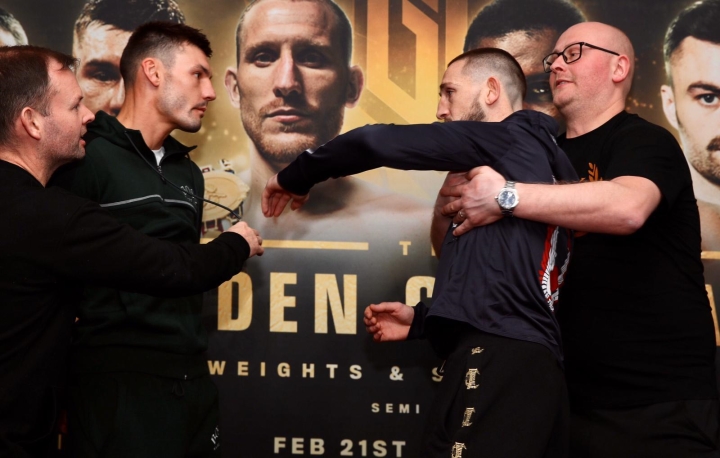 Victories over Nathaniel May, to win the vacant IBF European Featherweight title, and his Golden Contract quarter-final success against Carlos Ramos have undoubtedly put a spring in the step of the popular Scouser and can grab the WBO’s equivalent as well as the Commonwealth 126lbs title when he faces the in-form Leigh Wood on Friday.

In these nine and a bit years Dickens remembers a time when he wanted to be a champion there and then. Patience wasn’t the asset is now and says it is key for fighters nowadays.

“To be a professional boxer, and in life as well, takes patience. Just take your time, [it] doesn’t have to be all done now today. Just be patient and persistent and your time will come.”

Social media has its part to play in the little patience of many nowadays. For example, why read a news story or feature when it can be summed up in one tweet by someone. Dickens recognises the positives and negatives of the microblogging system and wouldn’t remove himself from it because of the happiness he can bring to others.

“Today, I woke up, and I was on there for two hours getting straight back to messages, organising fan mail which is a pleasure. That’s one of the things I love about it.

“When you’re having a rest day and you’ve got kids you want to enjoy your life as well but you’ve got to go and do these other things as well. Sometimes it can be intrusive but sometimes it can be a blessing. There’s people I can send something to, like a little gift for their kid or say to them they can come down to the gym and train with me and my coaches. It’s a blessing. I wouldn’t take myself off it because the positives outweigh the negatives tenfold.”

Build-ups, preparations, interviews can all be used in some form as a front for fighters to project how well things are going. And while Dickens says similar of his own camp for Friday’s fight, there is most definitely a fire in his belly to go out there and prove to the remaining semi-finalists that he wants the Golden Contract the most and believes that’s what it will come down to in the end.

“Who’s got the biggest balls, who wants to be the man?” he asks.

Dickens has been at world level, fought two of the best in Britain and is reluctant to move back down where he may have to rebuild once again. The past belongs exactly where it is and the future is for thinking about when it comes around. Dickens is living in the present moment and loving every second of it.

“By looking too far in the past or too far into the future you’re not living in the present moment and enjoying what you’re doing now. I’m trying to enjoy every single second of it now and soak it all up,” he says.

“I think the most important thing is to enjoy the whole occasion. The Golden Contract is an experience that not many fighters are going to be able to get throughout their careers and I’m lucky enough to be a part of the first one at Featherweight. It’s a really good one to be the winner of. It would be something special.”