MTK Golden Contract: Tyrone McCullagh Says He Has Nothing To Lose

Tyrone McCullagh went to a library (14-0, 6 KOs) after he got the contract to take part in the MTK Golden Contract Featherweight tournament.

McCullagh and close friend Tyrone McKenna, who is involved in the Super Lightweight equivalent, didn’t need much persuading to participate in the brand new format which has landed at the semi-final stage for the contenders of the 126lbs and 140lbs events which take place on Friday night at York Hall in London.

“Me and Tyrone [McKenna] hadn’t even opened up the contracts and we were on our way to the library to get it photocopied and signed. That’s how bad we wanted to be in it,” McCullagh told Boxing Scene. 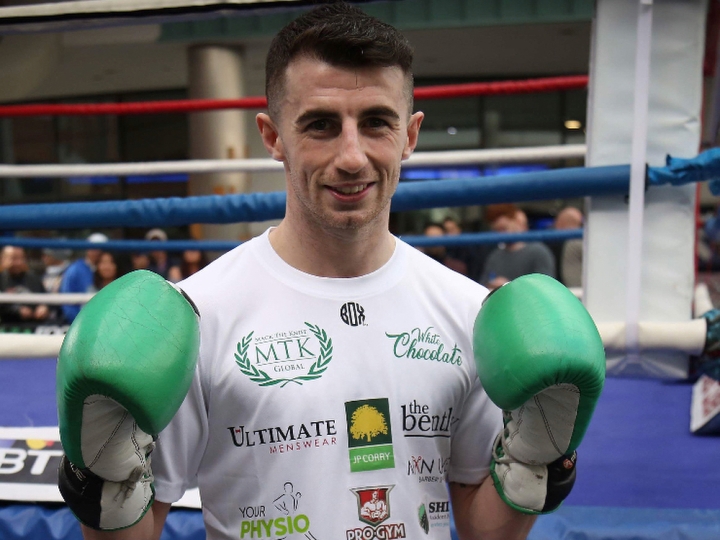 McCullagh, 29, is relishing the risk involved in the tournament and is well aware of his underdog tag that comes against opponent Ryan Walsh, and as he knows would have come against either of the other semi-final pairing of Leigh Wood and Jazza Dickens. McCullagh says he is in a no lose situation and doesn’t understand why anyone wouldn’t want to be involved in the competition.

“I think too many boxers these days are concerned with keeping their 0, going unbeaten fighting mediocre people, but if you look at the calibre of people in the competition at my weight they’re all ranked top ten in the world with certain [governing] bodies. Ryan Walsh is number two with the WBO. I don’t see why anyone wouldn’t want to fight them. Why not, it’s where you want to be.”

McCullagh has moved up from Super Bantamweight to Featherweight and is feeling the benefits of it. He feels stronger at 126lbs, he says he’s punching harder and is enjoying having the extra four pounds to carry around. His confidence is quiet and he has the dark horse feel about him given less is known about his strengths than the other three. Add his elusive style to the mix and he is a problem for Walsh, Wood and Dickens.

There is one concern on his part, however. One that will likely disappear come fight night but was brought up in the interview with ‘Scene. McCullagh’s last four fights have gone the distance (ten rounds), unanimous decisions each time but McCullagh has been left slightly bewildered by some of the scoring.

“I even thought a 97-93 (in his last fight against Rasaq Najib) was a bit harsh. I can understand the pressure being scored but in my last fight the lad, no offence or discredit to him, landed next to nothing. I don’t know how someone could have scored it four rounds for him, or even three. I might have lost one, possibly two. This has been happening in a lot of my fights where I think it’s close to a shut out and then I get a 96-94. It could be my style of boxing but again, like I say, I know aggression gets scored but if punches aren’t landing then I don’t see how they’re scoring the rounds for them. It is what it is I suppose.”

‘Scene then asked McCullagh if this is something that has been playing on his mind.

The winner of the MTK Golden Contracts, as you may or may not know by now, receives a contract with a top promoter rewarding the fighter with six-figure purses for five fights. So the financial gain is massive and the winner’s profile should go skyward towards bigger fights leading an eventual world title shot.

McCullagh was rumoured to be in line for a world title shot last August on the spectacular boxing event which Michael Conlan headlined at Falls Park in Belfast. Emanuel Navarette, the WBO Super Bantamweight champion, could have been making the second defence of his title against McCullagh. A tough task for anyone at 122lbs, but it wasn’t to be. McCullagh was disappointed but the disappointment was more at the fact he never got to box on the Conlan card in front of thousands on a memorable night for Northern Ireland.

“It was a bitter pill to swallow,” McCullagh says looking back on the experience.

“A massive, massive show in my home country and I really, really wanted on it and it didn’t materialise. For a while, I was probably never going to give it up, but I was thinking what’s the point. Am I wasting my time?

“I felt sorry for myself for a week or two and thinking what’s the point but at the end of the day these things happen, it’s boxing. I’ve been very lucky not having last-minute opponent pull-outs or last-minute injuries to myself in that regard. I know people have done full camps and have had pull-outs or they get injured and luckily that hasn’t happened to me yet. There’s good luck and bad luck in boxing. It probably evens itself out at the end of the day so you’ve just got to go with it I suppose.”

The disappointment of not fighting at Falls Park may become a blessing in disguise for McCullagh. Had he fought Navarette there would have been a strong possibility that he would have come off second best and may not have been able to rest and recover in time for the Golden Contract. McCullagh, the unknown quantity of the semi-finalists, now has the opportunity of a lifetime and one that sees him with everything to gain and nothing to lose.