Middleweight Dmytro Mitrofanov (6-0-1, 4 KOs) got his biggest win as a pro so far by stopping heralded Polish veteran Rafal Jackiewicz in four rounds this past Saturday at the Caribbean Club in Kiev, Ukraine. The show was promoted by Vlad Eliseev Boxing System and featured some locally prominent names in the undercard.

Mitrofanov, 29, was a 2016 Olympian for Ukraine, although he failed to advance past the first round of competitions. His pro career, which was kicked of overseas in late 2017, is so-so with some wins and a draw with little-known Hollander Gino Kanters.

Jackiewicz, 42, had started his own way in paid ranks, when his opponent was still just a kid. However, Jackiewicz’s best days are almost ten years behind him. He reached his peak in 2008/2009, when he defeated future champion Jan Zaveck and notable contenders Delvin Rodriguez and Jackson Osei Bonsu. He has gone a long and sad road since then.

Mitrofanov was always in the face of the Pole, pummeling him from the starts. Jackiewicz was his durable self but he felt every ounce of Ukrainian’s punches and its tonnage had been affecting him slowly. The critical mass was reached in the fourth, when Mitrofanov dropped Jackiewicz twice with body shots. The Pole failed to answer a bell for the fifth round. His record is now 50-25-2, 22 KOs, and he has lost his last six. 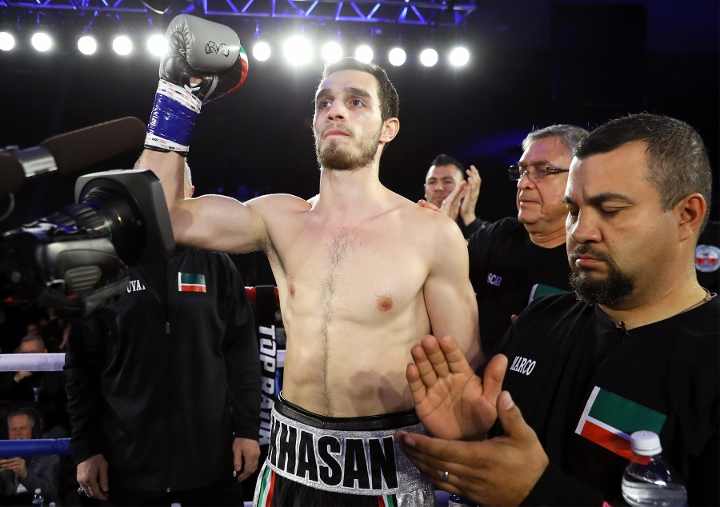 Former WBA middleweight title challenger Khasan Baysangurov (18-1, 8 KOs) successfully returned following his brave but inept performance versus then-champion Rob Brant in February – a challenge he has lost on a TKO. This time Khasan was more successful, vaporizing Belarussian Ilya Harlamov (9-6, 6 KOs) at 2:18 of the first.

Thank you for the results.

fantastic article and an exciting read.