NEW YORK – Mikey Garcia will remain at lightweight for at least one more fight.

Promoter Lou DiBella confirmed to BoxingScene.com on Tuesday that he has reached an agreement for his fighter, Richard Commey, to challenge Garcia for the IBF lightweight title. A date for the mandated Garcia-Commey match hasn’t been set, nor is an agreement in place with the network that’ll televise it.

DiBella and Garcia’s representatives came to an agreement, first reported by ESPN.com, late Monday night. A purse bid, scheduled for Tuesday afternoon at the IBF’s headquarters in Springfield, New Jersey, thus was canceled. 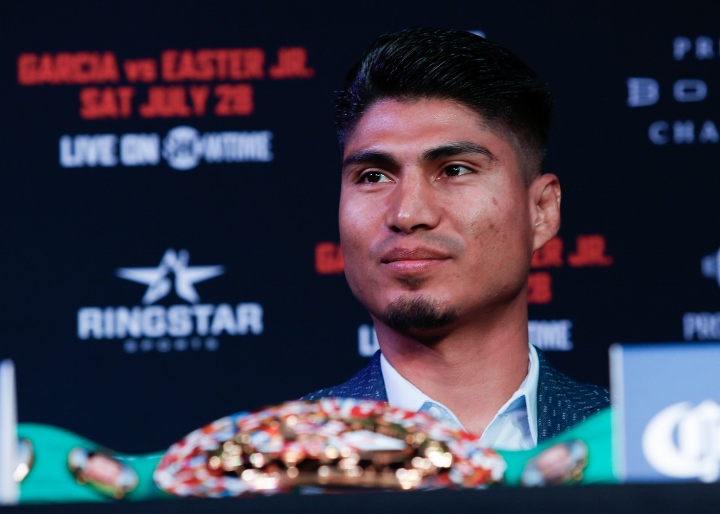 Garcia-Commey could be scheduled for as soon as December if it is broadcast by FOX as part of Premier Boxing Champions’ new deal with that broadcast network. Showtime, which has aired each of Garcia’s past five fights, also could televise it.

Ghana’s Commey (27-2, 24 KOs) is the mandatory challenger for Garcia’s IBF 135-pound championship. The New York-based contender is 3-0 since losing back-to-back split decisions to Robert Easter Jr. and Denis Shafikov in 2016.

After he beat Easter, the four-division champion ambitiously discussed jumping up two weight classes to challenge undefeated Errol Spence Jr. for the IBF welterweight title in his next fight. Stephen Espinoza, Showtime’s president for sports and event programming, told BoxingScene.com on Tuesday that Spence-Garcia remains a possibility for some time in 2019.

Promoter Bob Arum said recently that he wants to make a Garcia-Vasiliy Lomachenko bout for next year (https://www.boxingscene.com/arum-lomachenko-wants-mikey-garcia-fight-right-pedraza--131964). Arranging that lightweight title unification fight – clearly a more sensible bout for Garcia than facing the bigger, stronger Spence – would require Garcia to overcome Commey and Ukraine’s Lomachenko (11-1, 9 KOs), the WBA 135-pound champion, to top Puerto Rico’s Jose Pedraza (25-1, 12 KOs), who holds the WBO title, in their own title unification fight December 8 in The Theater at Madison Square Garden.

WHO the foooock is that guy?

[QUOTE=ShoulderRoll;19163706]When Mikey was chasing an Errol Spence fight Bob Arum suddenly expressed interest in Lomachenko fighting him. Now that the IBF mandated a Commey fight and Mikey is staying at 135 for one more fight let's see if Arum is…

✅ After his fight with Richard Commey, the WBC have confirmed that Mikey Garcia will be ordered to fight their lightweight mandatory challenger: Luke Campbell.— Michael Benson (@MichaelBensonn) October 3, 2018

[QUOTE=MrShakeAndBake;19160040]Mikey is ducking Linares and Loma, thats who LOL you still keeping that dumb azZ account for what?![/QUOTE] I usually keep from replying to Retarded posts but some people on here get so emotional it baits me . But ...…

[QUOTE=Real boxer;19163145]Ive been to Golden Boy cards, PBC, Top Rank, Goossen Tudor, etc. So what does Arum have to do with this again?[/QUOTE] When Mikey was chasing an Errol Spence fight Bob Arum suddenly expressed interest in Lomachenko fighting him.…