CARSON - It has been about 10 years since the best version of Miguel Cotto appeared in a boxing ring. The fighter from Puerto Rico fought and defeated the likes of Ricardo Torres, Paul Malignaggi, Zab Judah, and Shane Mosley.

Cotto is still a gifted fighter who can still defeat the fringe contenders of the sport, as he was able to do on Saturday night, outpointing Yoshihiro Kamegai over 12 round before an announced crowd of 7,689 at the fame Stubhub Center. 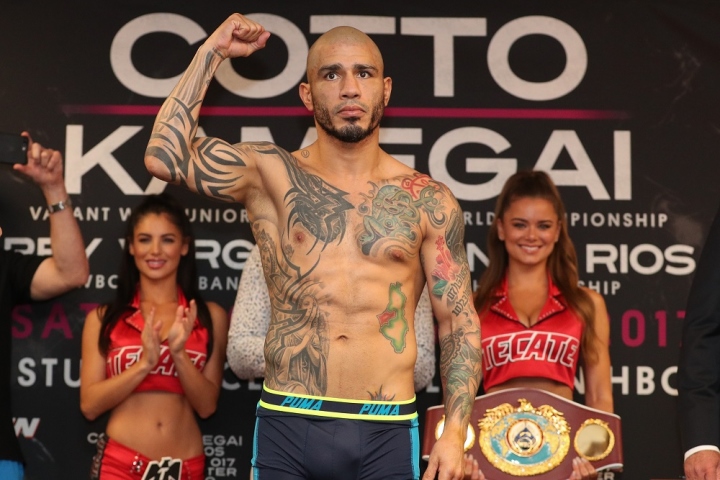 It was the first time Cotto had appeared in a ring since losing a unanimous decision to Saul 'Canelo' Alvarez in November of 2015. Kamegai, who resides in Tokyo, came into the Cotto fight unbeaten in three fights.

Cotto has stated numerous times he will not fight past December 31 of this year, calling it a career that will likely lead to a first-ballot induction to the International Boxing Hall of Fame in Canastota, N.Y.

Any attempt Kamegai had at a victory over Cotto evaporated by the third round. His game-plan of backing Cotto against the ropes and forcing him to fight off his back foot worked, but received numerous right hands and left hooks to the head from Cotto.

True to his style, and probably because it was his only way to win, Kamegai continued to remain in front of Cotto. Kamegai was able to score with an occasional right hand, but received two-three punches to the head and body from Cotto.

By the ninth round, the pace of the fight slowed as Cotto's punch output decreased. Kamegai continued to be game, but his punches had little impact on Cotto. As the fight entered the final two rounds, Cotto was content to box from the outside rather than look for the kill.

While winning a vacant world title may be enough to walk away from boxing, Cotto did state in the post-fight interview that he will return to the ring in December.

As for the Kamegai fight, it was business as usual for him.

"I think i did my best and I'm happy with my performance. (Kamegai) is a tough fighter. By the fifth or sixth round, I knew I was not going to be able to stop him."

The Miguel Cotto of 2006 would have knocked out the likes of Yoshihiro Kamegai. Cotto is on the downside of his career, but Kamegai came to fight and demonstrated he makes for fun fights.

Golden Boy and Teiken Promotions will use him again in a televised fight in the near future.

As for Cotto, he is content with what he has accomplished and will have no regrets hanging up his gloves after December 31.

"One more in December and that is all."

In the co-feature bout, Rey Vargas won a hard-fought 12 round unanimous decision over Ronny Rios.

Vargas was defending the WBC junior featherweight title for the first time since winning the vacant title on Feb. 25 with a majority decision victory over Gavin McDonnell.

Rios, who once competed as a featherweight, had won his five previous bouts.

Vargas utilized his four-inch height advantage to rain punches down on Rios. Vargas consistently landed straight and overhand right hands to the head of Rios during the first three rounds.

By the midway point of the fight, Rios closed the distance between himself and Vargas. Rios began letting his hands go more on the inside, especially to the body of Vargas.

Rios stunned Vargas with a counter left hook to the head at about the midway point of the eighth round. Just when it looked momentum shifted to Rios' side, Vargas was able connect from the outside. Rios' punch output dropped considerably and when they fought on the inside, Rios was not as active as in previous rounds.

"We came here to take the belt back home, even if it meant that we didn't get the knockout," said Vargas after the fight. "Rios was definitely an intelligent and skillful fighter. He got me with some head shots that threw mw off. He was of an elite level when it came to his boxing."

Rios was diplomatic in defeat.

[QUOTE=bigjer88;17990820]That's exactly my point about the lack of an upside: there's not enough money in it for Cotto to fight Lara.[/QUOTE] Ok pissed that. True he's gonna want much more money than Lara can offer

[quote=true that;17990699]lol that would be a good eliminator fight. Loser retires.[/quote] if broner cant beat berto he is done

[QUOTE=Don Pichardo;17990010]Don't say that. Cotto fought trout before whom posed the same risks. Cotto will fight anyone if you pay him enough.[/QUOTE] That's exactly my point about the lack of an upside: there's not enough money in it for Cotto…

If Ortiz could've have gotten some decent wins by December he might be been a good opponent for Cotto. Ortiz is huge at 147.....but no that's just crazy talk wtf am I saying

[QUOTE=americanlegend;17990587]i want to see broner vs berto next lol.... Ab vs ab[/QUOTE] Lol That would be a good eliminator fight. Loser retires.