Michael Hunter: I'd Fight Dillian Whyte Next if I Can't Get Joshua!

Maldonado, coming in, lost two fights in a row, both by decision, to Oscar Rivas and Oleksandr Teslenko.

“You know, I just tried to use my quickness, my speed and my ability. I knew I had the agile footwork over him so I just wanted to use that to be impressive,” Hunter said. 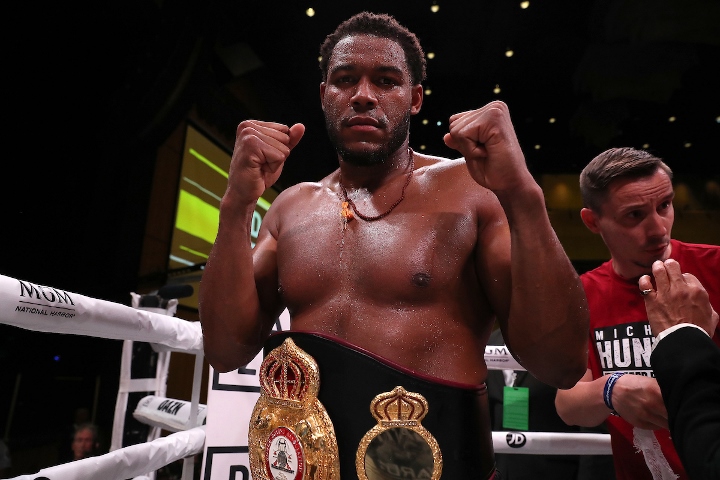 Hunter, since losing at cruiserweight to Oleksandr Usyk in 2017, has built up a win streak of four fights with knockouts of Martin Bakole and Alexnader Ustinov.

“It is the heart where I win at. I run them down. We are all over 200 pounds, but the difference is that I just have a bigger heart than everyone else,” Hunter said.

When the contest started, Hunter could not miss with his punches. Maldonado was defensive and trying to figure Hunter out.

A combination of punches to the head and body, in the second round, sent Maldonado flying across the ring. He was giving a standing eight count as he would have went down but the ropes kept him up. When the action resumed, Hunter started working him over and was battering Maldonado to the head and body for a second knockdown.

Once against Maldonado made it up to his feet, with the referee giving him one more chance to recover - and Hunter swarmed all over him with punches flying in from both hands - sending Maldonado down for the third time and the fight was waved off.

As far as his next fight, Hunter is willing to fight Dillian Whyte - should Whyte defeat Oscar Rivas on July 20 at the O2 Arena in Las Vegas.

And of course the top target on Hunter's list is unified champion Anthony Joshua, who next month defends against Andy Ruiz.

“I would love that [Anthony Joshua] fight at any time. Any mandatory, anytime, really. I will take any fight anytime. I am here to stay and I will take on anyone. I want to fight Joshua next. He is the cash cow and it’s an easy fight to make, we are both on Matchroom and DAZN. It should be easy to make that next. I’d like to fight Dillian Whyte if I couldn’t get AJ next," Hunter said.

U need to avenge that loss.. usyk is at heavyweight now.. or if u can beat Povetkin, parker, whyte, or chisora.. then u can talk about being ready for a championship fight..

Beating Whyte should be enough to get a title shot for Hunter, it's a good fight to be made. Make it happen Eddie!

Whyte should face wilder next, it's not like he hard a hard fight last week, get this done quick

How about Michael Hunter vs Jean Pierre Augustin on the Andrade-Sulecki card?