McCaskill: I'm The One Who Likes To Upset The Party, So I'm Not Surprised

Jessica McCaskill knew everything she had to do in order to shock the world.

After 10 rounds of action, the Chicago-based boxer knew in her heart that she had done all that she’d set out to do in order to dethrone undisputed welterweight champion Cecilia Braekhus. At no point until the decision was officially announced, however, was she confident of having become a two-division world champion.

“I was thinking to myself that it takes a lot to take it away from the champion,” McCaskill said of those final moments holding her breath before being able to exhale in celebration. “A lot of times when they call out the card, I just stay real mellow and real chill. I’m not worried, I’m not iffy. I’m just waiting for them to call my name and say ‘…and new.’” 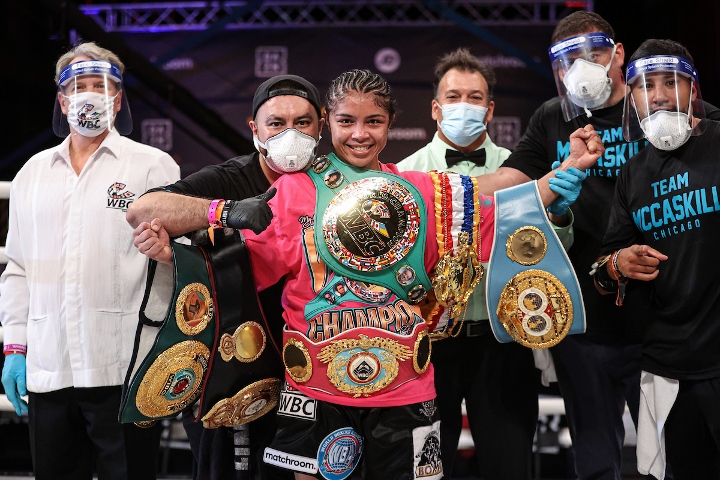 That moment came for her in the late hours Saturday evening from a crowdless makeshift outdoor venue in downtown Tulsa, Oklahoma. McCaskill, a reigning unified 140-pound titlist, moved up to meet Norway’s Braekhus (36-1, 9KOs) at a 145-pound catchweight in the first female fight to headline a DAZN boxing telecast from the United States. McCaskill landed 84-of-499 punches (15%), throwing 230 more than Braekhus, who landed at a higher connect rate (32% on 85-of-269).

However, most of the exiting champion’s best work came later in the fight, at a point when two of the three judges already had her well down on the scorecards. It was McCaskill who initiated the action for much of the first half of the fight and who was the more active down the stretch in order to create her own history.

“I just didn’t stop,” notes McCaskill, who has now dethroned three major titlists and champions in her last four fights, all since a December 2017 loss to lightweight champ Katie Taylor (15-0, 6KO). “I didn’t expect her to be as rough, but I was also as rough as I had to be. It’s just throwing when she’s moving. Keep punching, keep your feet moving and be aggressive.

“Shout out to (Compubox) they never do punch count for females. Tonight we saw, 230 more punches. That showed I wanted it.”

Braekhus entered the night having held at least one welterweight title since March 2009 and was attempting her 26th title defense. The legendary figure—who turns 39 in September—was more than a 5-1 favorite with most sportsbooks to leave the ring with her belts intact and her eye on a superfight with Taylor down the road.

What ultimately transpired may have stunned some—perhaps even many. But most certainly not the one who’s hand was raised in the end.

“I’m the one who likes to upset the party, so I’m not surprised,” insists McCaskill.

Can we get McCaskill vs Serrano please! Call that fight, “Maximum Violence” , both go for the KO, Just have that fight at 3 min rounds!