Mayweather: If Tank Gets Past Leo, 1 More Fight, Then Hopefully Teofimo Fight Can Be Made

SAN ANTONIO – Floyd Mayweather didn’t attend the Gervonta Davis-Leo Santa Cruz press conference Thursday, but he was otherwise busy promoting their fight on one of the most prominent platforms in sports.

When the focus of Mayweather’s interview with ESPN’s Max Kellerman and Stephen A. Smith inevitably turned toward a Davis-Teofimo Lopez showdown, Mayweather indicated it is two fights away if Davis defeats Santa Cruz on Saturday night at Alamodome. Smith made it clear he wants to see Davis face more dangerous opponents than Santa Cruz, but Mayweather staunchly defended Santa Cruz’s value as a pay-per-view opponent.

The retired superstar also argued that his promotional company’s franchise fighter isn’t avoiding anyone in the lightweight division, including Lopez, the fully unified 135-pound champion.

“If you guys are basically asking, Tank is not scared of anyone,” Mayweather said during an episode of “First Take,” which aired live Thursday morning. “And the reason why we are not able to make certain fights with Top Rank is because of – it just, like I said before, and I talked about this other day as far as so many belts, so many champions. But if we can sit down and come to the table, I think if Tank gets past Leo, which I truly believe he can, it may not be easy, but then we move on and we fight one more fight. Then, hopefully, a fight with Teofimo can be made.” 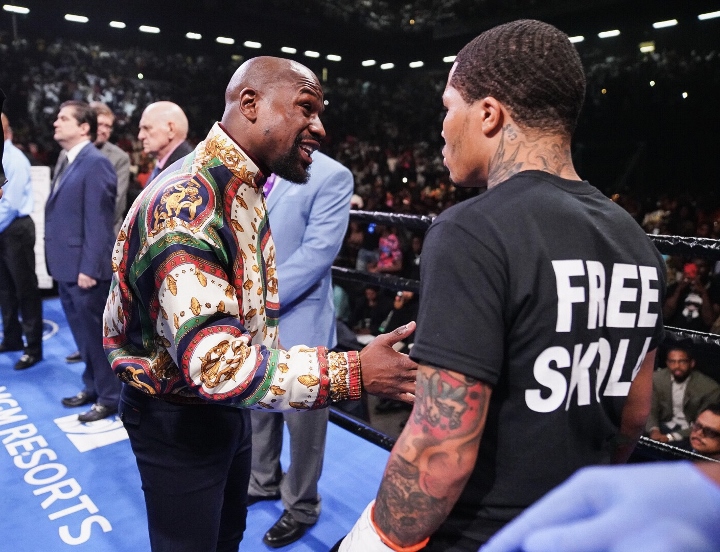 The 32-year-old Santa Cruz (37-1-1, 19 KOs), a four-division champion from Rosemead, California, and the 25-year-old Davis also will fight for Santa Cruz’s WBA “super” 130-pound title in their 12-rounder. The contracted weight limit for the Davis-Santa Cruz clash is 130 pounds, even though Davis’ 135-pound crown is at stake.

[QUOTE=Clegg;20846844]Spent years ducking Loma, now gonna duck the guy who beat Loma. With Loma, age and experience was used as the excuse. But now it's even worse because he's avoiding a guy who is younger, has less fights, less title…

[QUOTE=IRONCHINHAGLER;20849149]true ...but Floyd saying “one more fight then Lopez “ is obviously saying we are going to wait til Lopez moves up to 140. Lopez is obviously not scared to lose that 0 ..... can’t say the same about Davis/Floyd.[/QUOTE]Floyd…

[QUOTE=Bronx2245;20848370]All true, but you forgot to mention that Teo is not interested either! Teo's my dude, but that surprised me! It really shouldn't because I know making 135 is hard for him![/QUOTE]true ...but Floyd saying “one more fight then Lopez…

[QUOTE=IRONCHINHAGLER;20847805]Per Floyd “Tank ain’t ready for Loma”....now “one more fight then Lopez”.....man up already and call out Teo who has half the pro fights u have !! Dare to b great for once and stop cherry-pickn smaller, past their prime,…

Can you imagine if Adrian Broner will all his antics inside and outside the ring, never lost a fight. If he beat Porter, Garcia, Maidana, Manny, & Vargas. This guy would have been the biggest PPV star and box office…