Martin Murray: Saunders Fight A Few Years Late But We're Both Looking Forward To It

Martin Murray has been waiting more than two years for this opportunity, though it’s redemption and not obsession which fuels his desire.

The hard-luck veteran contender from St. Helens, Merseyside receives his fifth career title fight, the latest coming in a domestic clash with countryman and reigning super middleweight titlist Billy Joe Saunders. The bout takes place this Friday, live on Sky Sports and DAZN from The SSE Arena, Wembley, coming nearly 30 months after the two were due to collide.

Murray was in line to contend for Saunders’ middleweight title, with their bout twice postponed in 2018. Saunders would never go on to make another title defense at 160, having since moved up in weight where he claimed a 168-pound title at stake this weekend.

“This is going to be my fifth (title opportunity). I know how hard it’s going to be,” Murray admitted during Wednesday’s final pre-fight press conference. “We really rate Billy Joe. We’ve got unfinished business. But everything happens for a reason.

“I firmly believe and truly believe that the pullouts years ago and the setbacks have turned me to this point. I’m fit, I’m focused and I’m ready.” 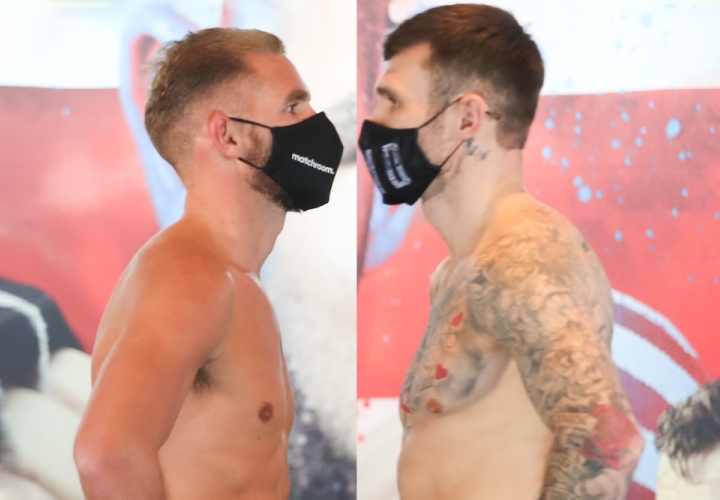 Murray (39-5-1, 17KOs) was riding a modest three-fight win streak heading into his scheduled March 2018 clash with Hatfield’s Saunders (29-0, 14KOs), who withdrew due to a hand injury. The fight was postponed to later that June, only for Saunders to this time claim a hamstring injury as the reason for pulling out of their fight.

The date remained in place, with Murray settling for a 12-round win versus late replacement Roberto Garcia. From there came a path to one more title shot, though falling short in a 12-round decision to Hassan N’Dam N’Jikam in their December 2018 middleweight eliminator.

At 36 years of age at the time and four failed attempts at becoming a champion, it was believed to be Murray’s last chance. A disputed 12-round draw with Felix Sturm in December 2011 denied Murray a middleweight title, as did a questionable 12-round unanimous decision in favor of then-lineal middleweight king Sergio Martinez in April 2013.

The lone convincing loss for Murray at the title level came in a one-sided 11th round stoppage at the hands of then unbeaten titlist Gennady Golovkin in February 2015. A move to super middleweight followed, where three straight knockouts paved the way for a crack at then 168-pound titlist Arthur Abraham who escaped with a 12-round split decision win in November 2015.

“Sturm was nine years ago… Sturm, Martinez. I thought I won the fight against Abraham as well but I left it too close to call in Germany,” admits Murray, who has won two straight but has been out since last November. “On Friday, I’m just happy I have the chance to lay it all on the line and leave it all in the ring.”

This time—and perhaps his last chance at this level—at least comes with unfinished business.

“Obviously, it hurt. I get why he did it. He wanted bigger fights, we all do,” Murray says of their 2018 title fight never coming to pass. “I was frustrated at the time but left it where it was.

“I’ve got nothing against Billy. But he’s here now and he’s honored his word. It’s a few years late, but no doubt we’re both looking forward to it. He’s in top condition himself. We’re gonna lay it all on the line and it’s gonna be a great fight.”

Most fighters don't get five bites at the apple across two divisions like this. Murray is a big, strong, durable gatekeeper, but the fact that he lost to someone like N'dam two years ago tells me that he has no…

This is Murray’s final chance at a world title shot. I hope he brings out the best in him and puts on a brilliant performance. This is wishful thinking, but I’d love to see him give Saunders hell.

Always been a Saunders Fan. Was only one out my circle who was sure he was gonna beat Eubank Jr years ago. Watched a Jamie Moore interview earlier, and it’s actually got my heart pulling for Murray, simply for the…