Undefeated light heavyweight contender Marcus Browne, 28-years-old, was arrested Wednesday and accused of criminal contempt for allegedly violating an order of protection that his ex-girlfriend and their daughter have in effect against him, according to the Staten Island Advance.

the most recent arrest marks the fourth time that Browne has been im trouble, with the same woman, in the past 18 months.

According to the criminal complaint, the latest incident took place on May 22 at the woman’s Clifton home in Staten Island, New York. Browne, who holds the WBA's interim title at 175, allegedly barged into the woman’s apartment after dropping off their daughter and wouldn’t leave. 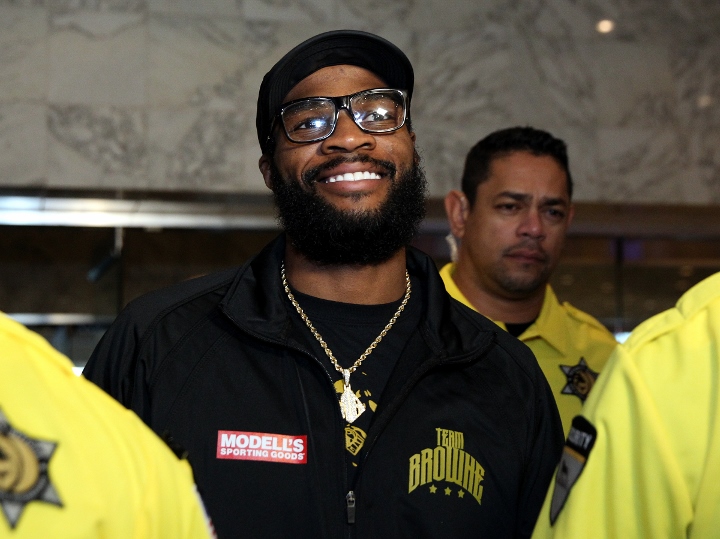 An argument broke out after Browne asked to use the restroom, and she called 911, states the paper.

Browne (23-0) was arraigned Wednesday in Criminal Court and released on $5,000 bond. His next court date is set for August 12.

In January, Browne pleaded guilty in to misdemeanor criminal contempt after being accused of attacking his ex-girlfriend in her apartment last Sept. 27. Browne is scheduled to return to court on Sept. 26 in that case to ensure his compliance with the terms of his conditional release.

The boxer also had previously pleaded guilty to disorderly conduct to resolve two other cases involving the woman which were ultimately consolidated.

The arrests led to Browne being pulled from a planned fight with WBO light heavyweight title bout with Sergey Kovalev in June 2018, after HBO and Kovalev's promoter were concerned over Browne’s arrests.

Browne is scheduled to fight former world champion Jean Pascal on August 3rd at the Barclays Center in Brooklyn, as part of a FOX televised tripleheader - headlined by a heavyweight fight between Adam Kownacki and Chris Arreola.

He wants to set a record 😂

The 4th time?? Jeez, I never want to see this POS in the ring again.

Quote: Originally Posted by club fighter Yea, he may not be dealing with it in the best way, but I know from experience that a custodial mother can be as ruthless as any KO artist, sometimes much more. He got…

He just need to let it go, it’s not worth it. Four times!!! You know a woman would phuck anyone they want and you wouldn’t know. Barging into her apartment thinking you are going to catch anyone is laughable. A…

[QUOTE=hitmanjosh;19832209]Have you seen the order, have she been to court all this can go away! Money talks even to a baby mama fool[/QUOTE] I don't need to see the order this dude is on camera breaking her door and threatening…