Manny Pacquiao Looking at March or April Date For Return

He began the year in January with a dominating twelve round decision win over four division champion Adrien Broner at the MGM Grand in Las Vegas.

Pacquiao came back to the same venue in July, when he turned back the clock in defeating unbeaten Keith Thurman for the WBA title. 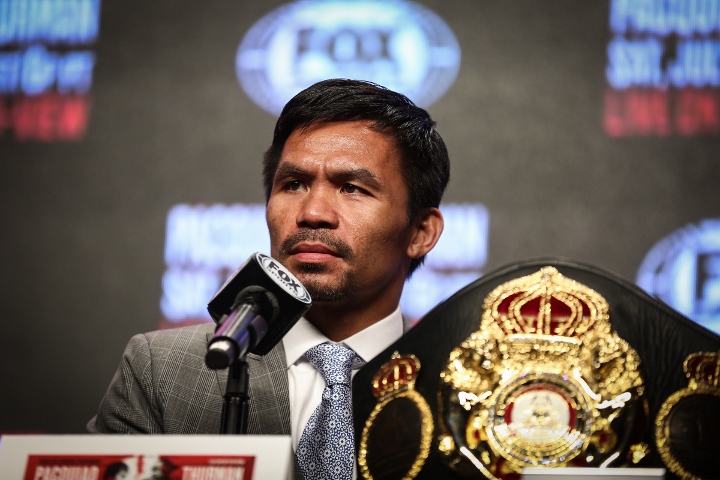 There are several possible options under the Premier Boxing Champions umbrella.

IBF, WBC welterweight champion Errol Spence is slated to return in the first half of the year after suffering injuries in an automobile accident.

There are also options like Danny Garcia, Mikey Garcia, Yordenis Ugas, Shawn Porter and several others.

Pacquiao, who is a senator back home in the Philippines, is looking to return on a date in March or April, because the Senate will be in recess from March 14 to May 3.

“I can fight in March, April because the Senate will be on break during that time,” said Pacquiao to the Manila Bulletin.

Some of Pacquiao's senatorial staff told the paper that a date of April 11 has been floating around.

MP Promotions head Sean Gibbons expects his man to fight in the first half quarter of the year.

While some believe Mikey Garcia is the frontrunner to get the fight, Pacquiao's Hall of Fame trainer Freddie Roach said he would prefer Danny Garcia as Pacquiao’s opponent. He believes Mikey is not an attractive opponent because he's coming off one-sided decision loss to Spence.

[QUOTE=Larry_Rushmore;20199789]That guy said TOP 3 ATG [SIZE="6"]EVER[/SIZE]!!!!!!! If you are going to make claims like that then you need to be able to back it up[/QUOTE] AGAIN which era, I can say that Alexander the Great was the greatest boxer…

[QUOTE=Boxing Hero;20192796]Why does it take Manny so long to fight in between fights?? Is he semi-retired?[/QUOTE] Because he is a sitting Senator in the Philippines and he can only fight in between Sessions... You do know this right ?

Manny Pacquiao's only legitimate loss ,in his prime, is against the great Mexican legend Erik Morales. Pacquiao's fist loss was against Rustico Torrecampo. But its was because he wasn't able to make weight. And Pacquiao had to wear heavier gloves.…

[QUOTE=Pennstate110;20226189][url]https://www.telegraph.co.uk/sport/othersports/boxing/10301092/Floyd-Mayweather-admits-to-cashing-in-on-handpicked-opponents-ahead-of-world-title-fight-against-Saul-Alvarez.html[/url] *Drops mic ✌️[/QUOTE] I dont see the relevance to Manny having 7 losses and many CWs and shonky matchmaking, Manny got put on ice by guys Floyd schooled like an amature . Manny was one of Floyds easiest wins…

[QUOTE=Roadblock;20202565]Not with 7 loses in prime and stopped twice. Then add the CWs and cherry picking come on kid smell reality it cleanses the soul ![/QUOTE] [url]https://www.telegraph.co.uk/sport/othersports/boxing/10301092/Floyd-Mayweather-admits-to-cashing-in-on-handpicked-opponents-ahead-of-world-title-fight-against-Saul-Alvarez.html[/url] *Drops mic ✌️