As he enters his 70th professional fight, a little more than a month past turning 40, there is much to be said about Manny Pacquiao being on the back nine of his career. He needs a victory Saturday night (Showtime PPV, 9 PM EST) to stay in the mix for big fights at welterweight.

It’s not the whole story of the fight.

The personality of Adrien Broner over the years has meant eyeballs even if his in-ring performance has never caught up to his overall profile. Personality can only be banked on for so long. In a must-win fight for both men, this may be an even more important night for Broner.

Pacquiao can lose and, while it would harm his immediate earnings, his place in history is already secure. He is probably at worst the second best fighter of the century to date and in terms of titles the most accomplished fighter of all time. It will be a long time before we ever see a former flyweight champion rise to win the Jr. welterweight crown again much less a major title at welterweight. What he does at forty really doesn’t matter much in the grand scheme.

Broner is a different story. He enters this weekend having not won a fight since February 2017, a split decision against Adrian Granados. His last two outings, a lopsided loss to Mikey Garcia and draw against Jessie Vargas, were both fairly decided. He could easily be coming in with three straight losses. If he can’t beat a forty-year old Pacquiao, one wonders how many more big paydays he can count on?

Broner should be desperate. Will we see that in the ring? 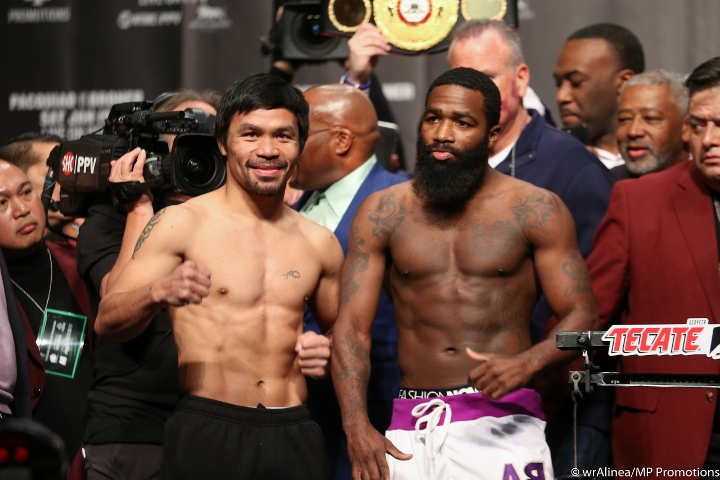 The Case for Pacquiao: Pacquiao doesn’t fight at the pace he did in his prime. No one could really expect him to. The more measured Pacquiao still displays a lot of ring smarts. In over a decade at welterweight, the power that made him a star in the lower weights waned. There have been lots of knockdowns but his win last time out against Lucas Matthysse was his first stoppage since 2009. Pacquiao has remained a force with footwork, angles, and picking spots where he can land in enough eye-catching fashion to command the judges. Broner isn’t as reluctant to throw as has been made out coming into the fight, at least in comparison to Pacquiao. Both throw below the welterweight average per round in the last few years. Where Pacquiao can exploit Broner is in his opponent’s tendency to go cold when under fire. Broner throws; he doesn’t always throw back. Broner has shown a beard and Pacquiao is used to going the distance so Pacquiao is likely to approach this as a long assignment. A Pacquiao who respects the power of Broner, works in spots, and doesn’t stay in range consistently to be drawn into exchanges, can add up rounds.

The Case for Broner: The “Problem” can be one if he doesn’t get discouraged should an early deficit emerge. Broner may come out to make a statement early and try to steal some of the first few rounds but he should have his eye on the Jeff Horn fight. Broner has more power than guys like Bradley or Vargas. Jeff Horn had success late against Pacquiao because, after surviving a harrowing ninth round, Pacquiao gassed a bit. Broner has proven, as was the case with a final round knockdown in a loss to Shawn Porter, that he’s dangerous until the final bell. One can’t ignore his success against southpaws either. Broner is undefeated against lefties…though Pacquiao isn’t the most orthodox of southpaws. Broner has to make sure he is making the fight between Pacquiao’s spots. If he can win the moments where he leads he eats away at the opportunities for Pacquiao to do the same. This could be a battle of who can win more moments from round to round.

The Pick: Broner has never quite exceeded a particular ceiling in his career. There’s no reason to think we’re going to see anything more than he’s been in the past. He’s a good fighter, and one whose careful management saw him acquire a lot of belts, but against Maidana, Porter, and Garcia, we saw a fighter who can compete but not really win past a certain level so far. He runs about even with guys like Granados and Vargas; Pacquiao barely lost a round to Vargas. Pacquiao might not be the elite force he once was but his best was so much better than Broner’s it’s hard to see them as equal now even given the age gap. Broner is a guy who has often scraped by, even dating to early in his career with guys like Fernando Qunitero. It’s easy to envision a scenario where aged legs and miles logged see Pacquiao beaten as much by time as Broner. It’s easier to envision Pacquiao’s experience and skills handcuffing Broner’s offense. The pick is Pacquiao by decision but in a closer fight than some pundits seem to expect.

Pac is more calculated these days he doesn't need to throw nonstop to beat you like he did in his prime. He used to throw without reason and would eat a lot of shots in the process. Now hes more…