Vasyl Lomachenko came off the floor in round six to cut Jorge Linares in the eighth, then score his own knockdown in the 10th to become the new WBA lightweight titlist. Lomachenko becomes the fastest ever to win a third divisional title (12 fights compared to Jeff Fenech's 20) thanks to his jabbing (40.2 attempts/11.5 connects per round)and his accurate power punching 43% to Linares' 39%).

It is ironic that Lomachenko ended the fight with a body shot because coming into the fight only 14% of Lomachenko's connects were to the body -- it was 18.3% tonight -- while Linares' upped his body-punching game (35% of his total connects in previous fights, 37.2% tonight).

A high-contact chess match in which the styles meshed perfectly. 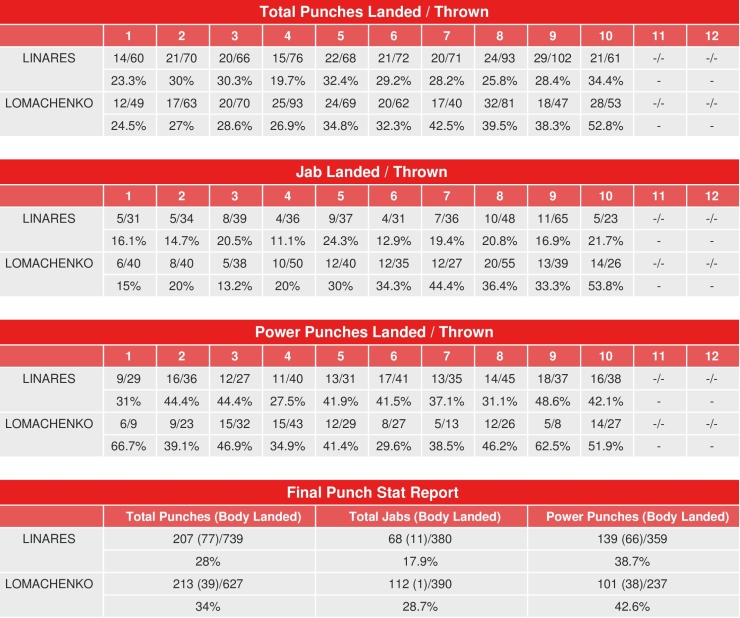 Vasiliy Lomachenko stopped Jorge Linares in the 10th round of their lightweight championship fight Saturday night, winning a title in his third weight class in just his 12th pro bout.

Lomachenko landed a hard left to the body during a flurry of precision punches that sent Linares went to a knee. Linares finally got up just as the count was reaching 10 but referee Ricky Gonzalez called an end to the fight at 2:08 of the round.

Linares knocked down Lomachenko in the sixth and the fight was all even after nine rounds before Lomachenko (11-1, 9 KOs) put an overpowering end to his first fight at 135 pounds, adding that title to his belts at 126 and 130 pounds.

Linares (44-4, 27 KOs) hadn’t lost since 2012 and used his size advantage to do some damage, but in the end Lomachenko did more in an exciting Madison Square Garden match.

Each fighter was ahead 86-84 on a judge’s card, while Julie Lederman had it 85-all after nine rounds.

Lomachenko said Thursday he needed to finally be put in danger to show his complete array of skills, and then on display in the 10th round with a series of shots that Linares couldn’t defend, especially the left to his midsection that took the biggest toll.

But unlike when he fought at the smaller Theater inside MSG in December in his last bout, a sixth-round stoppage of the smaller Guillermo Rigondeaux, this time Lomachenko faced a bigger man and a much bigger test.

Compubox was way off in numbers. I watched the first couple rounds in VLC Slow Motion. Neither guy landed double digit numbers in either round. Most punches were blocked with Gloves or Elbows. They are both so quick with their…

Very impressed with Loma. The guy is the real deal! Linares outweigh him by amost 15 pounds and that's a big deal for elite fighters. Unify all the belts first before moving up. A move to 140 will be too…