Lomachenko: I Plan To Stay at 135 For a 'Couple of Years'

During his in-studio visit to 'the 3 Knockdown Rule' with Mario Lopez last Friday, WBA lightweight champion Vasyl Lomachenko (11-1, 9 KOs) stated that his preference was to plant his flag for a bit at 135, after winning titles in three weight divisions in just a dozen fights.

Lomachenko, who was just a couple of days removed from surgery to repair a torn right labrum suffered during his May 12th bout with Linares, stated that he wants to take part in unification bouts in the lightweight division - and has a target on WBC champion Mikey Garcia, WBO champion Ray Beltran and IBF champion Robert Easter.

"I'll stay at 135 and want to unify the titles with Mikey (Garcia) and with Beltran and maybe Easter. To me, it doesn't matter. I want to unify," Lomachenko said. 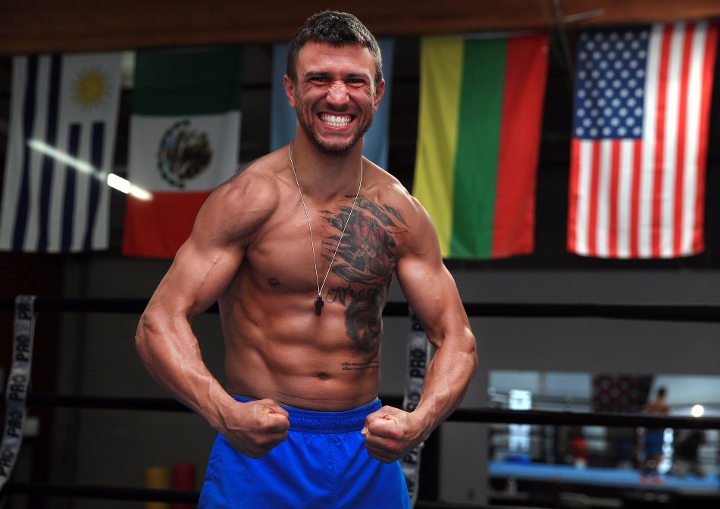 Last week, Lomachenko's promoter, Bob Arum of Top Rank, stated that it was his belief that Loma's weight threshold would be the junior welterweight limit of 140-pounds.

It was evident that by the time they both stepped into the ring at New York's Madison Square Garden that Linares was the significantly bigger man.

"We go into the ring together, I saw him after the weigh-in, I think, 'Oh, he's big now,' a bit different," said Lomachenko.

So table any talk of him moving up another weight class.

His manager, Egis Klimas, who accompanied him on the show, added, "Dominate 135, not just stay - dominate."

[QUOTE=Archie_Leach;18833852]already turned doen the fight multiple times and made excuses doe. guy in your avi was a bum..[/QUOTE] Easy tiger. Lets not say things we can’t take back. You’ve got a lot goin’ against you as it is. Who’s in…

You get them whiskers caressed the wrong way once and all of a sudden you are staying at 135. lol

Smart move I think. He's already pretty small at this weight. 140 is pushing it. At 147, he'd get overpowered by the top guys.

[QUOTE=Califire209;18832850]How do you figure Mikey is much bigger, his body definitely isn't ready for 140 that is for sure. Mikey and Loma are both the same height and they both started their careers at 126. Calling him a cherry picker…