Lomachenko Coach: Rigo Will Have To "Fight" if He Wants To Win

Cicilio Flores has worked with some of the best names in boxing in recent years and is recognised as one of the sport’s leading strength and conditioning coaches.  Having prepared the likes of Sergio Martínez and Sergey Kovalev in the past, Flores’ standout client at the moment is Vasyl Lomachenko who takes on Guillermo Rigondeaux for the WBO super featherweight title this Saturday night in New York City.

Flores, having experienced several Lomachenko training camps insisted to BoxingScene.com this week that preparation for the Cuban has been no different to previous occasions.

“It has felt like any other fight in training camp,” Flores said, speaking from New York. “We understand the importance and magnitude of course but it all remains the same. It’s a great fight, you have two great champions with great amateur history, they’re two of the best fighters in the world today so this is as good as it gets right now for the world of boxing.” 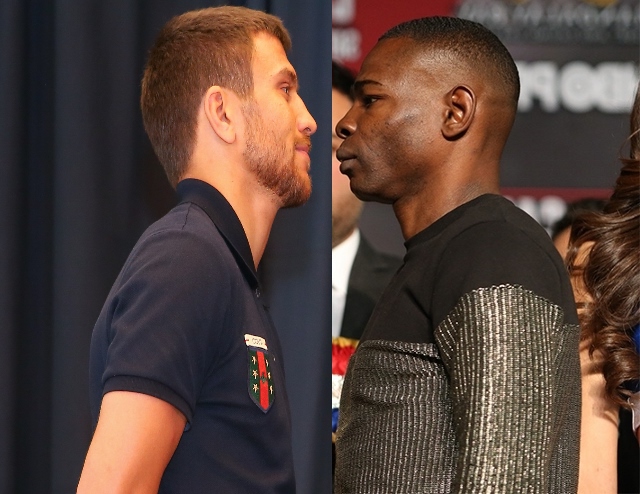 Lomachenko is heavily favoured by fans, media and the bookies, with opinions particularly citing the size factor, yet Cicilio does not believe there is as much of a gap between them as some have made out.

“I think it’s an even fight,” he offered.

“Lomachenko does have a little bit of a height advantage but Rigondeaux has, I think, a two and a half inch reach advantage.  I know Rigo fights at 122lbs but I’m sure he doesn’t walk around at that weight throughout the year.  Lomachenko puts on an average of 8-12lbs after a fight.  They’re both small guys but I’ll tell you this - Lomachecnko will be stronger, and that will be a major factor, plus his speed in being able to dominate Rigo.”

Flores, who also works with the likes of Oleksandr Gvozdyk and Alexander Besputin, confirmed what Rigondeaux’s trainer, Pedro Díaz recently told BoxingScene, that there will be a weight limit on the morning of the fight.

“The 138lbs contracted weight is not a problem, he agreed to that and it won’t be a factor or any kind of problem," Flores said.

“Loma is prepared to go 12 rounds and, his father will give him the instructions on how to beat Rigondeaux.  We all want a knockout in the camp, but Loma will take it round by round and see what happens.

“He (Rigondeaux) doesn’t have the best chin in boxing, that’s why he fights the way he fights.  We’ll see on Saturday night, Loma wants to show the world that he belongs at pound for pound and continue his legacy.  If Rigo wants to beat Lomachenko he will have to come and fight, you can’t be on your bicycle for 12 rounds and think you’ve won.  He has to come and fight if he wants to be victorious.”

rigo had no fight at all. he quit like a punk

[QUOTE=j.razor;18295905]We will see how you play your cards come sunday....and don't be giving lomo rounds just because, I want clean punches & not pitty-pats that don't land.[/QUOTE] You must feel dumb now? No credit for Loma I guess?

[QUOTE=Dr Rumack;18305679]It's very hard to see Rigo being busy enough to win. Lomachenko is a very effective shoe-shiner and he will be able to make it look like he's working even if he's not doing anything effective. It's one of…

[QUOTE=soul_survivor;18295862]Rigo will shell up pretty quickly and get through twelve.[/QUOTE] It's very hard to see Rigo being busy enough to win. Lomachenko is a very effective shoe-shiner and he will be able to make it look like he's working even…