Boxing has always had a knack of creating sights and sounds that will live with you forever.

The concussive punch from Juan Manuel Marquez landing on his nemesis Manny Pacquiao in 2012 to rubber stamp his greatness. The ring walk that Michael Conlan made at Falls Park, Belfast last year that gave you goosebumps whether you were in the arena or watching on television.

Lewis Ritson (20-1, 12 KOs) is no stranger to delivering similar memories to his fans in the north east of England. And in turn his army of followers create a wall of noise inside the Metro Radio Arena in Newcastle that would be at home inside the city’s football club at St James’ Park which can seat over 52,000 people. 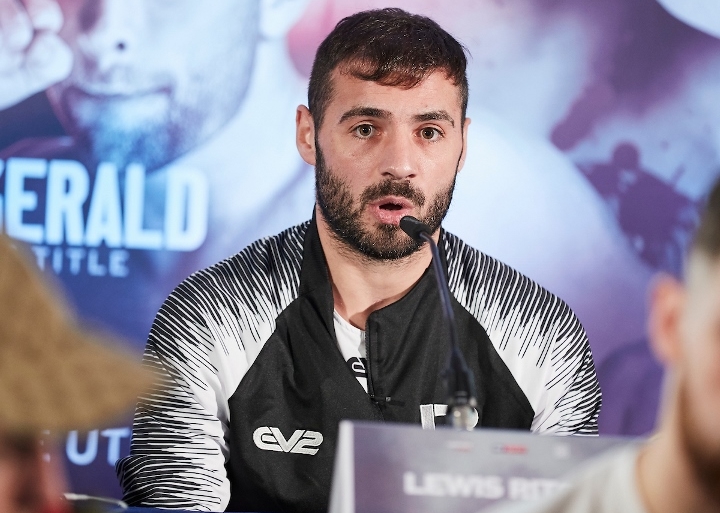 Chants of “Toon, Toon” followed by the lyrics to folk song ‘Blaydon Races’ is just one of the reasons that have turned local hero Ritson, once an electrician, into one of British boxing’s cult stars and has seen him rise to number two in the World Boxing Association rankings.

“The first time, I couldn’t believe there was only five and a half thousand in there,” Ritson told Boxing Scene as he recalled that memorable night, against Paul Hyland in 2018, that was the rebirth of big time boxing returning to Newcastle.

“The Metro [Arena] has been sold out since and I do believe it was louder for the Hyland fight than it was for the other two [against Francesco Patera and Robbie Davies Jr.] When I walked out the people just seemed to take the roof of the place. That’s a memory I’ll have till the day I die and I don’t think anything will ever beat it, even a world title unless I win it at the arena. I don’t think winning it will top that night against Paul Hyland with the crowd going wild as they did and how the fight ended.”

The fight ended with ‘The Sandman’ sparking Hyland out in one round which rewarded him with the British lightweight title outright and followed up on his previous demolitions of Scott Cardle and Joe Murray.

“I’ve went from struggling to sell 50 to 100 [tickets] on local shows to not being able to get as many tickets as I want. It’s mad. For some reason Newcastle have picked me to get behind and they’ve shown the support and they’ve shown that the people are loyal and that they’ll be loyal until the day I call it quits.

“Within five years [since turning professional I’ve] won the British title outright in the fastest time ever and then won a few other bits and bobs with the WBA and then being ranked quite highly. I never thought I would have done that in my whole career never mind just in the five years. I think I’ve done well and better than what I think I have but there’s a lot more to come and I think I can go on to become a world champion.”

Ritson’s world title aspirations are now at super lightweight. The 26-year-old’s wave of terror in the domestic lightweight division didn’t carry up to European level when Patera won a split decision against the home favourite to walk away with the vacant lightweight title.

“We were looking a bit too far ahead of him and it all came crashing down,” said Ritson.

Ritson has since climbed back up and won three on the bounce at his new weight. Victories against German Argentino Benitez (UD 10) and Marek Jedrzejewski (TKO 3) settled him in to the division before a grudge match, created from a backstage altercation after his win against Jedrzejewski, last October helped Ritson realise that he can compete against the bigger men at 140lbs.

The grudge match pitted Ritson against Liverpool’s Robbie Davies Jr., who was deemed at times too big for the ten stone weight class and has since moved up to ten stone seven pounds. But prior to the jump Ritson and Davies Jr. served up a 2019 fight of the year contender. Another memory for his fans. The ebb and flow, the hell for leather beginning and end saw Ritson come out on top after 12 pulsating rounds of boxing.

‘Scene asked Ritson about that fight and whether or not, in the immediate aftermath, he, the fighter, knew he had just been involved in a modern British classic.

“I know that out of the 12 rounds we had six where we were toe to toe and we had six that were more of a boxing match. I knew the fight had a bit of everything but it’s not until you go back and watch it on the telly that you go, ‘That was a canny fight’. It takes two to tango. Fair play to Robbie, he came full guns blazing on the night and so did I. We both got ourselves in tip top shape and we both put on a good fight.”

Ritson’s reactions to such events as well as his place in the British and world scene at 140lbs are a reflection of the man’s personality. Laid back. A family man with no airs or graces that has endeared him even more to the boxing public.

“My manager [Phil Jeffries] says you can blow on me and I’d fall over. I’m just that laid back. To be fair I’ve got a good team around me, my dad, [trainer] Neil Fannan and Phil. They make sure that they keep your feet firmly on the ground and that’s the type of lad I am. Just take one step at a time and what will be, will be.”

[QUOTE=BobLoblaw;20543948]Hard to dislike the Sandman and has brought boxing back to the North East of England. Newcastle fight night looks like a great event.[/QUOTE] Agreed. Fun to watch and makes a great night boxing needs that regardless of talent.

Hard to dislike the Sandman and has brought boxing back to the North East of England. Newcastle fight night looks like a great event.